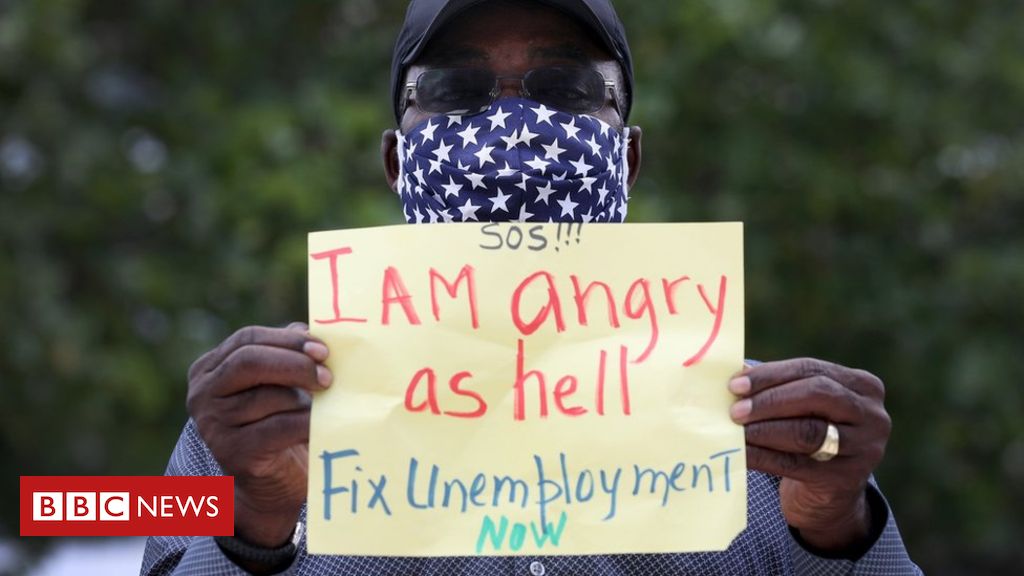 
More than 21 million people in the US – roughly one in six workers – are now receiving unemployment benefits amid the economic havoc triggered by the pandemic.

The dramatic numbers, a sign of the steep job losses triggered by the virus lockdown, are not unique to the US.

But they are prompting fierce debate in a country that has long attached stigma to state aid.

That pushed the new applications made since mid-March above 40 million, weekly Labor Department figures show.

Another 1.1 million people also applied for benefits through an expansion of the programme passed as part of the government’s emergency coronavirus relief, which expanded what kind of workers are eligible for assistance.

The scale of the crisis this spring created rare support among Americans for a broader safety net, said Victor Tan Chen, an assistant professor of sociology at Virginia Commonwealth University, who has studied attitudes toward unemployment in the US compared with other countries.

But he warned that backing is already waning, despite the ongoing need.

“This is a national and international crisis. People are understanding they have to do what they have to do to keep themselves and their families afloat, so it’s diminished that stigma – at least for the time being,” he said.

“But you can already see that part of the culture rising up and it’s going to get worse and worse as this situation drags out.”

Economists – including the head of the America’s central bank – have warned holding back further assistance may slow economic rebound, which remains uncertain, despite loosened restrictions in many states.

But lawmakers are now fighting over extending the emergency relief and arguing over whether a $600 across-the-board boost to the benefits – which can vary widely by state and worker – was too generous, noting that some low-wage workers are earning more on unemployment than they did on the job.

Republican Senate leader Mitch McConnell said this week that he thought another round of economic relief was likely. But talks about the package are reportedly minimal and he rejected an aid proposal worth an estimated $3tn approved by the Democrat-controlled House.

“The way that the recovery will be fast is, if people who have been out of work because of the virus have enough income so that when the economy does reopen they will be able to get out there and spend,” says Heidi Shierholz, a senior economist at the Economic Policy Institute, who was the top economist at the Labor Department during the Obama administration.

The Labor Department’s report on Thursday showed the number of new claims in the week ended 23 May continuing to subside since the peak at the end of March. For the first time, the number of Americans on state unemployment programmes also dropped back, falling to 21 million.

But the figures remain much higher than anything seen since the Great Depression, with the total number of people participating in all state and federal programmes at roughly 31 million as of 9 May.

The US also said on Thursday that the economic contraction in the first three months of the year was 5%, worse than the 4.8% initially estimated.

Many forecasters expect a rebound to begin this summer. But predictions by the Congressional Budget Office and others see the unemployment rate staying above 10% by the end of the year – roughly triple what it was in March and higher than the 10% peak during the financial crisis.

On Wednesday, Boeing said more than 12,000 employees in the US will lose their jobs in coming weeks and American Airlines revealed plans to cut management and support staff by 30%.

“We know things are still deteriorating,” Ms Shierholz said. “When we’ll start to see some turnaround it’s hard to know.”

Surveys estimate that more than 100,000 small businesses – about 2% of the nation’s total – have shut permanently, while 3% of restaurants have gone out of business.

Emma Craig, who lost her jobs as a restaurant server and supper club singer when New York’s stay-at-home orders went into effect in March, says government help has been critical financially.

Without the $600 coronavirus bonus, Ms Craig says the benefits would barely cover her $1,200 monthly rent. With it, the 31-year-old says she is making “just below” what she earned in a bad week before the pandemic.

“With the $600, I’m keeping my head above water,” she said. “If I was just getting unemployment it would be laughable.”

Ms Craig said it took her some two months – and hundreds of phone calls – after she first filed for unemployment to see the cheque, and a stimulus payment was critical in tiding her over.

But she had no qualms about seeking assistance – nor have the many friends and colleagues she has who are in similar situations.

“This is exactly the time to use it,” she said, noting that the problems had come “through no fault of anybody’s own”.

The closures came just as Ms Craig felt like she was finally making it as a professional singer, a career she had been working toward for a decade.

“It all came crashing in very quickly,” she recalls. “It was literally 24 hours – what is my career, what is the future?”

But she says she believes she can see the light at the end of the tunnel, despite the uncertainty facing her industry. This week, the club told her it planned to reopen though it has not set a date.

“That was a big game changer,” she said.