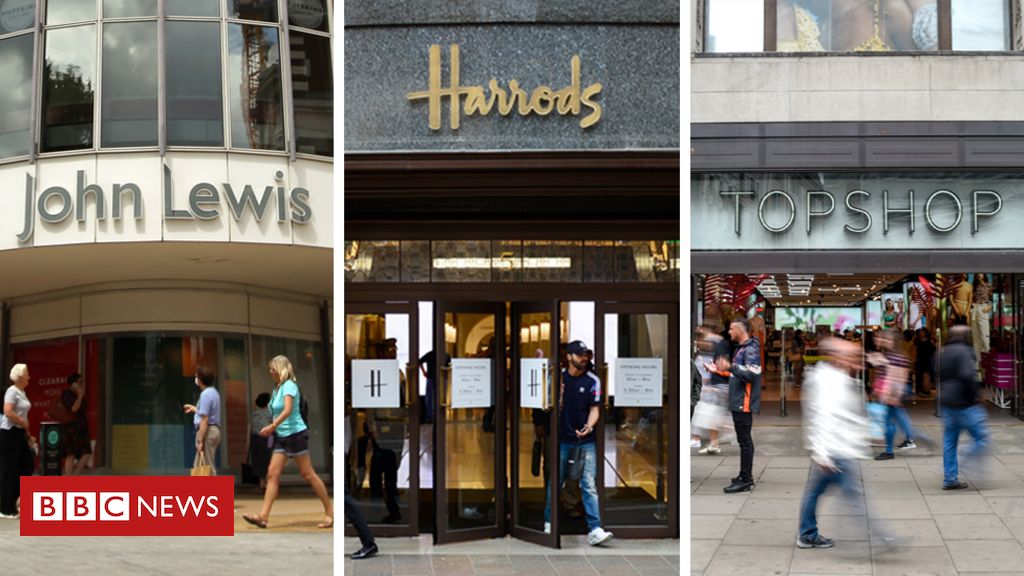 
At least 11,000 people in the UK are set to lose their jobs after a raft of firms announced cuts in the past 48 hours.

The cuts are mainly being made by High Street retailers and in aviation – two of the sectors hardest hit by the coronavirus lockdown.

John Lewis has said it will close stores but has not confirmed how many jobs will go.

Topshop owner Arcadia and Harrods said they planned a total of 1,180 job cuts.

In the last 48 hours, UK job cuts that have been announced include:

John Lewis’s plans were first shared with staff at the company, which is owned by its employees. The number of stores and jobs which will go has yet to be decided.

Cuts could also include the smaller of its two head office buildings in London.

“The reality is that we have too much store space for the way people want to shop now and we have shared this with our Partners,” the company said in a statement.

“As difficult as it is, it is highly unlikely we will reopen all our John Lewis stores. However, no decision has been made and any details would be shared with Partners first by the middle of July.”

The company is unlikely to pay its workers a bonus next year, it added.

It follows a warning from the company in March that it could close shops, as a plunge in profits forced it to cut staff bonuses to their lowest level in almost 70 years.

Separately, Upper Crust owner SSP Group says up to 5,000 jobs could go across its UK outlets and head office, as it struggles with the reduction in passenger travel.

It’s hard to keep up with the scale of job cuts and restructurings in retail and hospitality right now. In the last 24 hours alone, more than 2,000 job losses have been announced, from TM Lewin and furniture chain Harvey’s to Harrods and head office jobs at Sir Philip Green’s Arcadia group. That’s on top of the 5,000 jobs under threat at Upper Crust’s owner, SSP Group.

Businesses are being forced to cut costs dramatically to survive, so that inevitably means job losses. It also a sign that these businesses are not expecting any quick economic rebound. Instead, they’re planning for tough times to continue.

There are likely to be thousands more to come in the weeks and months ahead. Even though non-essential shops have been open for more than two weeks now, with hospitality set to follow on Saturday, the scale of the latest job losses underlines the challenges these sectors are facing.

Aerospace giant Airbus says it plans to cut 15,000 jobs as it deals with the effects of the coronavirus crisis.

It will cut 1,700 jobs in the UK, along with thousands more in Germany, Spain and elsewhere.

EasyJet said on Tuesday it had begun consultations on plans to close bases at Stansted, Southend and Newcastle.

The Unite union said nearly 1,300 UK crew members faced losing their jobs, while pilots’ union Balpa said it had been told by EasyJet that 727 of its UK-based pilots were also at risk of redundancy.

About 600 workers will lose their jobs after shirtmaker TM Lewin announced on Tuesday it will close all 66 of its UK shops.

John Lewis, which also owns Waitrose, launched a review of the business, which it said would involve “rightsizing” its stores across both brands.

The luxury retailer Harrods has announced it is cutting up to 680 jobs because of the impact of the coronavirus.

In an email to staff, managing director Michael Ward said Harrods was slashing up to 14% of its workforce of 4,800 people.

He wrote: “With a heavy heart, today I need to confirm that due to the ongoing impacts of this pandemic, we as a business will need to make reductions to our workforce.”

He said it would take a “drastic improvement in external conditions” for Harrods to recover and return to growth.

“The necessary social distancing requirement to protect employees and customers is having a huge impact on our ability to trade, while the devastation in international travel has meant we have lost key customers coming to our store and frontline operations,” he added.

Mr Ward said the job cuts would come “in parts of the business that have been most affected by the challenges of lockdown”.

Arcadia, owned by billionaire Philip Green, said 500 of its 2,500 head office workforce would be cut.

“Due to the impact of Covid-19 on our business including the closure for over three months of all our stores and head offices, we have today informed staff of the need to restructure our head offices,” the company said.