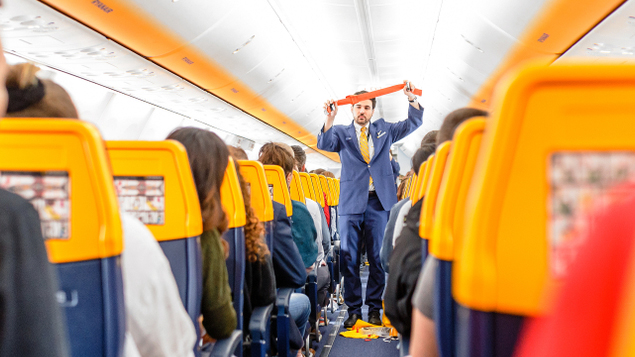 Cabin crew employed by Ryanair in the UK have agreed to take a pay cut in order to protect their jobs.

According to the Unite union, Ryanair will keep all cabin crew on in return for the acceptance of temporary pay reductions of between 5-10%.

It follows news that Ryanair pilots accepted a temporary pay cut of 20% in order to safeguard jobs. Pilots will see their pay restored to 100% over the next four years.

The potential closures of its bases in Leeds Bradford, Prestwick, Bournemouth and Southend have also been averted, Unite said.

The temporary pay cuts for cabin crew will be made on a tiered basis; the lowest paid will have a 5% pay cut, with 7.5% pay cuts and 10% pay cuts made depending on the employee’s earnings.

The pay cuts will be reversed in two tranches in 2023 and 2024, but Ryanair has committed to scrapping them earlier if the budget airline returns to pre-Covid-19 levels of business sooner.

The current pay agreement for wage increases has also been retained and will be phased in from 2023.

Unite assistant general secretary Diana Holland said: “Unite has been contending with an incredibly difficult set of circumstances in the aviation sector.

“The agreement with Ryanair shows that the company has taken a more constructive and less damaging approach to dealing with the issues than many of its competitor airlines.”

Oliver Richardson, Unite national officer for aviation, said: “That these reductions are temporary and tiered to ensure the lowest paid are least affected was an important outcome of our negotiations and critical to our members voting to accept the proposals.

“Unite has always maintained that temporary problems require temporary solutions. Ryanair’s management have shown that it is possible to reach an agreement on exactly that basis.”