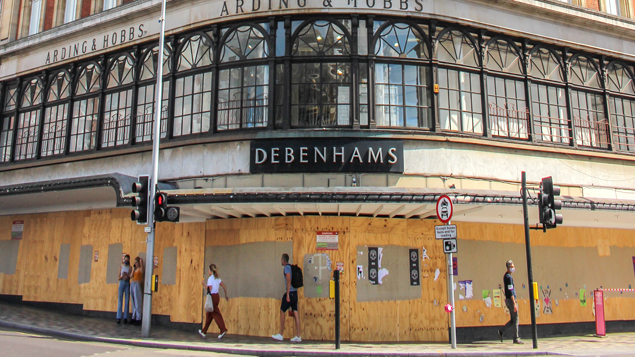 Debenhams is among the organisations that have announced hundreds of job losses Image: CK Travels / Shutterstock.com

Employers planned more than 300,000 redundancies over a two-month period, as restrictions introduced to reduce the spread of Covid-19 took their toll on the economy.

According to data obtained by the BBC from the Insolvency Service, 1,784 firms in England, Wales and Scotland filed plans to cut almost 150,000 jobs in July – a sevenfold increase on July 2019 – while in June 1,888 organisations proposed making 156,000 redundancies – six times higher than the previous year.

The proposed redundancies were notified via HR1 forms, which employers must submit to the government ahead of making 20 or more staff redundant.

This suggests that the actual number of proposed redundancies would have been higher in June and July, as there would have been cases where organisations had planned fewer than 20 job losses.

However, recruitment firm ManpowerGroup said there was a glimmer of hope for job seekers as employers’ hiring intentions were beginning to show some signs of recovery. While its latest employment outlook survey of 1,258  UK employers revealed hiring intentions were at -8% – indicating a reduction in the workforce – this is a four-point uplift compared with the previous quarter.

ManpowerGroup UK managing director Mark Cahill said: “The headline number illustrates just how tough the labour market is currently. This is still the second weakest Outlook we’ve seen since 1992. But the four-point national increase from last quarter, along with a positive trend in several key sectors, is cause for some cautious optimism.

“Despite the end of the furlough scheme in October and signs of a resurgence in the virus in some areas, employers expect the UK jobs outlook to be tentatively heading in the right direction as 2020 ends.”

The utilities (+4%) and agriculture (+8%) sectors are the only two sectors planning an increase in headcount rather than a reduction. However, organisations’ plans to shrink their workforces appeared to be stalling, with a nine-point upswing in hiring intentions to -7% in finance and business services; and signs of recovery in manufacturing and construction (from -14% to -7%).

Cahill said: “Many big building and infrastructure projects are now pushing hard to make up for lost time, and construction firms have had several months to refine their social distancing procedures while maintaining productivity.

“There’s still very strong demand for skilled trades: electricians, carpenters, engineers. The hope is that the rise in staycations and strong uptake of the Eat Out to Help Out scheme will provide a late-summer shot in the arm for hospitality, but there’s no doubt that the last quarter of 2020 will remain difficult.”

A government spokesperson told the BBC: “We are continuing to support livelihoods and incomes through our Plan for Jobs to ensure that nobody is left without hope or opportunity. This includes a £1,000 retention bonus for businesses that can bring furloughed employees back to work.”

“We are also creating new roles for young people with our Kickstart scheme, creating incentives for training and apprenticeships, and supporting and protecting jobs in the tourism and hospitality sectors through our VAT cut and last month’s Eat Out to Help Out scheme.”