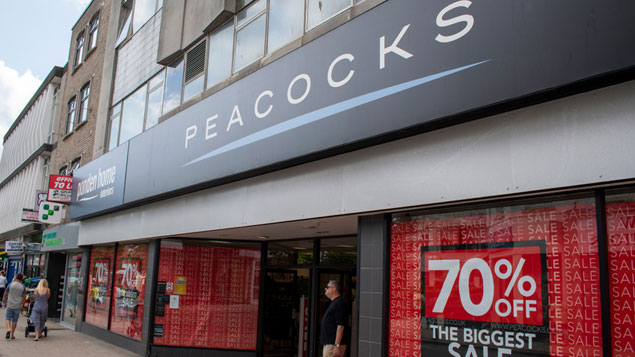 High street fashion stalwarts Peacocks and Jaeger have gone into administration, with more than 4,700 jobs and almost 500 shops being put at risk.

Today’s news comes after the chains’ owner, Edinburgh Woollen Mill Group (EWM), failed to find a buyer for either business.

No stores have closed and no redundancies have been announced yet as administrators were still searching for buyers.

FRP Advisory’s Anthony Wright, joint administrator of the business with Alastair Massey, said talks with potential buyers were continuing. He said that Jaeger and Peacocks were attractive brands that had “suffered the well-known challenges that many retailers face at present”.

He added that “advanced discussions” were continuing “with a number of parties” and FRP was working hard to secure a future for both businesses.

On 5 November EWM called in administrators for its own clothing chain – sold at more than 250 stores across the UK – and its homeware brand Ponden Home, putting 2,900 jobs at risk.

The group had secured a temporary court order to forestall Peacocks and Jaeger seeing the same fate, but that has now expired.

Jaeger is a London-based fashion business with 76 stores and concessions and employs 347 staff.

As recently as 2017 EWM was making acquisitions as profits had grown and in early 2018 it purchased Berwin & Berwin from administration – which owns brands including Lambretta, Paul Costelloe and Baumler. The move saved 800 jobs. EWM is owned by businessman Philip Day.

Peacocks has been rebranded over the years as a value fashion store. It was previously placed in administration in 2012 with KPMG appointed as administrators. EWM Group then purchased the Peacocks brand, 388 outlets, concessions, the headquarters and logistics functions in Cardiff. However, 224 outlets were not sold to EWM, resulting in 3,100 immediate job losses.

Jaeger has been under EWM ownership since 2017 after having entered administration. However, EWM had bought the Jaeger brand and debt, but not the main company, or secured the future of its 700 staff or payments to its suppliers, from its former owner.