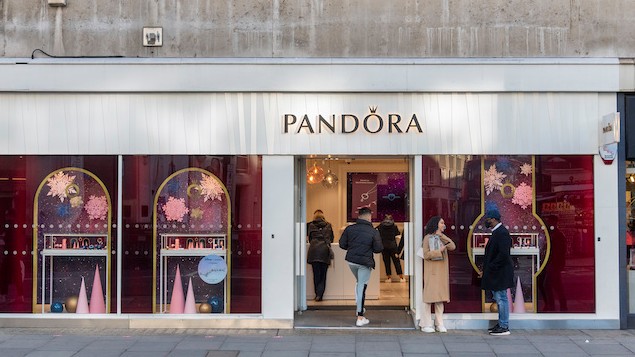 Pandora, the world’s biggest jewellery retailer, has said it will continue to pay its staff in full despite widespread store closures due to the coronavirus.

In an interview with the BBC, chief executive Alexander Lacik said the company could “withstand a big drop in sales” before it would consider permanent store closures. At one point during the pandemic, 80% of its 2,700 shops were forced to shut due to restrictions.

Lacik has nevertheless kept all of its 28,000 staff on payroll, even those who were unable to work because stores were closed by government restrictions. He said this was the “ethical thing to do”.

“Looking at how people have kind of returned that when stores reopen, I think it was a fantastic thing to do,” he added.

In November, he estimates around 18% of Pandora shops will need to close as lockdown restrictions resume in many countries because of a second wave of coronavirus cases.

Online sales have grown by 89% in the three months up to the end of September, but Lacik said he believed that physical retail would continue to be important as customers enjoyed a hands-on experience in store.

He added that fewer promotions and a round of funding from investors had helped the company to keep paying its staff despite the challenges of the pandemic. According to analysts, the first nine months of 2020 were only 2% down in terms of sales compared with the same period in 2019.

Because many customers browse online before shopping in store, a drop in sales due to closures also leads to a dip online. “What we see, for instance, in places where we have closed down physical retail, my ecommerce retail also goes down. So it’s a combination of the two,” Lacik told the BBC.

Pandora joins a number of employers that have either continued to pay employees despite lockdown restrictions or that have repaid government furlough money.

A number of law firms recently announced they would pay back furlough money after better than expected performance, and retailers ASOS and Primark both pledged to repay money from the job scheme – which was recently extended until March.