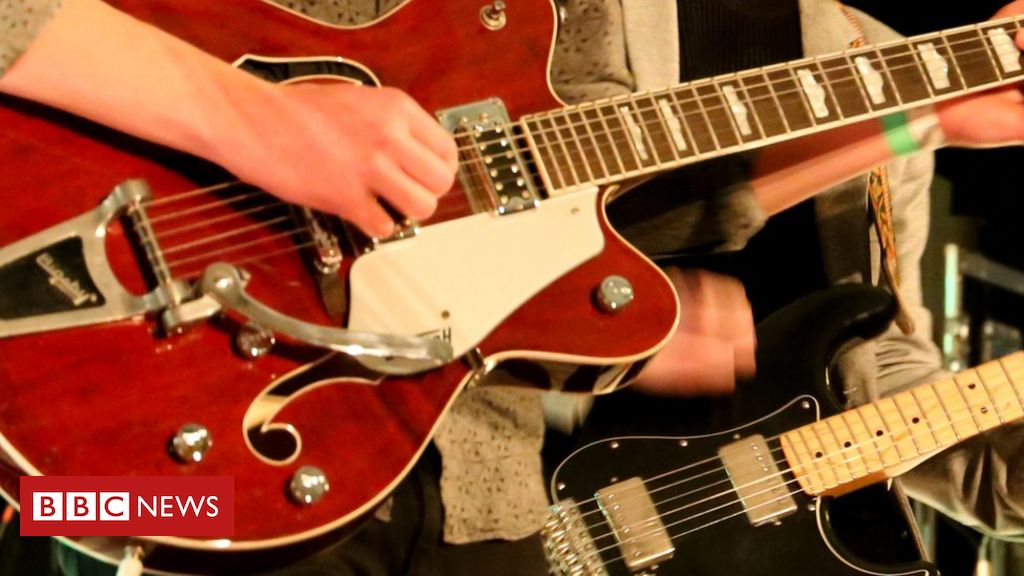 Pandemic ‘biggest knock to live music in my life’

Pandemic ‘biggest knock to live music in my life’


As the coronavirus lockdown eases in many parts of the world, record shops and record labels have been roaring back into life.

Yet while the business of selling music is looking healthier, the people who perform it – and those who make live music possible – are still suffering.

Gigs remain subject to safety measures and social distancing restrictions, so venue owners are having to having to think long and hard about when and how to reopen.

In the meantime, one innovative firm has found a new way of bringing live music to a mass audience.

But even preparing to go back on stage is causing huge problems for bands, as unsung yet vital parts of the industry’s infrastructure buckle under the strain of the pandemic.

“This is the biggest knock to live music in my lifetime,” says Katya Stephenson, a director of the Joint studios in London’s King’s Cross area.

“I’ve been through two recessions and it barely made a difference. Live music in a recession is often the thing that people resort to. But I’ve never seen anything like this. This is something else.”

For 26 years, the Joint has provided pre-gig rehearsal facilities and practice rooms to countless big names in the music industry, from the Pet Shop Boys and Suede to Adele and Sam Smith.

Now, however, the premises have been stripped bare and Katya is preparing to hand the building back to the landlord.

Even before the pandemic struck, the business’s days were numbered. But when she realised how big an impact lockdown would have, she knew there was no point in seeing out her lease until 2021.

At the start of this year, the studios were booked up until October. But all that changed on Friday 13 March.

“I came into work that day and I got 40 cancellations in the first hour,” she told the BBC. “People were already panicking. I went from full to completely empty within that first week.”

With tours and festivals cancelled because of lockdown, bands had no need to rehearse. And all the people whose jobs depend on live music were suddenly out of work.

“I’m closing down and I needed bands to move their equipment, which was stored in the building. So they had a tiny bit of work moving equipment.”

So how do bands get back to performing live? And what about the sound and lighting crews and other people working in the industry?

Well, Ric Salmon has come up with a way to help fill the void. He’s chief executive of Driift, a new company set up at the start of lockdown as a way of making pay-per-view live shows available online.

In his other role as a director at ATC Management, he was seeing top clients such as Nick Cave and Laura Marling having to bail out of global tours with tens of thousands of tickets sold.

“Lots of artists were doing selfie-style Instagram live shows, but with just an iPhone, there’s only so much you can do,” he told the BBC.

So he hit on an idea: what if you hired a venue, organised a performance with no audience and a small crew, then sold tickets to watch it being streamed live?

The first show that Driift put on was an acoustic set by Laura Marling at the Union Chapel in Islington, London. Digital ticket platform Dice agreed to sell the tickets. But the big question was: how much should they charge?

“We knew it would cost £30,000 to do something properly, which was a big investment and a hefty risk,” says Ric.

Aiming to break even at least, he set the price at £12, so that after sales tax, each one would bring in £10. That meant they had to sell at least 3,000 tickets.

“In the end, we did more than twice that – 6,500 tickets, for a venue that holds 800,” he says. Further performances followed: Nick Cave, Dermot Kennedy, Biffy Clyro and next month, Sleaford Mods. About 40 shows are planned for the next nine to 12 months.

Ric sees the Driift model as something new that can complement existing music business formats. For one thing, filming a live concert without an audience allows greater access to the performers, with no worries about camera crews getting in the public’s way.

And it provides work for professionals in the industry, with up to 70 people involved in a production.

But what about actual live music events that you physically attend? Those have been possible again in England since 15 August, but only 16 venues across the country reopened on that date.

One of them was the Sound Lounge in Morden in south London, run by husband and wife duo Kieron Marshall and Hannah White.

The venue normally holds 250 people, but the audience was limited to 50, with everyone sitting at carefully spaced tables. The audience were allowed to clap, but dancing and cheering were not permitted.

Kieron said: “Hannah performed and we did it as a pilot – we are not up and running fully yet.

“On a realistic level, most venue owners aren’t artists. Hannah did it for free, the bar was run by volunteers and I did the sound.”

Another venue, the Piano Works in London’s Farringdon district, is preparing to reopen in October.

The venue has a six-piece band which plays non-stop music and members of the audience request their favourite tunes. But as operations director Tristan Moffat says, handwritten notes to the musicians won’t work in the age of coronavirus.

“We’re hoping to have a digital platform in place prior to opening, so requests are no longer on napkins,” he told the BBC.

But before punters even enter the club, they will have their temperatures taken and be sprayed with disinfectant in a special tunnel.

Clearly there is some way to go before going out to see a band is once again a normal part of our lives.

“Unfortunately, the very last thing to come back in the world will be live music at any scale,” says Ric Salmon of Driift. “We’re suffering an unprecedented scenario.”