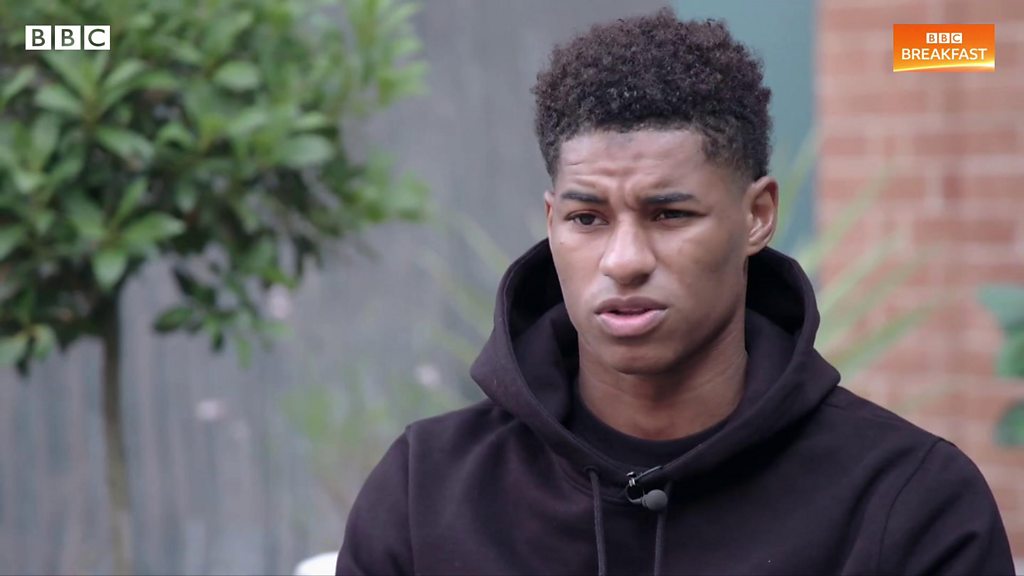 
Footballer Marcus Rashford has formed a taskforce with some of the UK’s biggest food brands to try to help reduce child food poverty.

He has written to MPs, outlining the help he feels some families still need.

They include expanding the numbers who are eligible for free school meals – and offer them free food and activities during school holidays in England.

Mr Rashford has spoken about his own experiences of using a food voucher scheme as a child and was praised for pressing the government into a U-turn on the issue.

The taskforce is calling for three policy recommendations by the National Food Strategy to be funded by the government as soon as possible:

The taskforce says implementing the three recommendations would mark a “unifying step to identifying a long-term solution to child poverty in the UK”.

Tara Brown, 50, receives Universal Credit and disability allowance for her nine-year-old son, who has autism.

She says the voucher scheme has been “brilliant” because he eats what she calls a restrictive diet – so prefers consistent packed lunches to free cooked meals at his school in Essex.

“It’s been nice to be able to get it so that I know it’s not eating into my weekly food budget that I put aside for our evening meals,” she says.

She wants to see vouchers become a permanent option for parents.

“I think it should be down to parental choice as to whether the money goes direct to the school or if the money goes via a voucher [for packed lunches] to the parents,” she adds.

“For people that are, financially, in a much worse situation, who have children with this sort of avoidance of foods, then the voucher scheme has probably been an absolute godsend to them.”

Mr Rashford said he was “confident” the group could help change lives “for the better”.

Speaking to BBC Breakfast, he said the move to extend free school meals over the summer had been a “short-term solution” to stopping children from going hungry, but it “wasn’t going to work in the long run”.

Mr Rashford is hoping that, with a bigger team of experts around him, he might be able to help more children.

“We wanted to do it the best way we could, introduce the best people into our group, and see if using them [we] can push it even more.”

What is child food poverty and how many does it affect?

In his letter to MPs, Mr Rashford says he hopes the chancellor will find the funds to do so in his Budget and spending review “without delay”.

Schools minister Nick Gibb said he would be delighted to meet Mr Rashford, saying the footballer was “right to draw the nation’s attention” to the matter.

He told BBC Breakfast the government shared Mr Rashford’s objective to alleviate child food poverty and would look at the policy recommendations.

The first report of the National Food Strategy, which was commissioned by the government in 2019, aims to help create a food system in the UK that is healthy, affordable and sustainable.

Food entrepreneur Henry Dimbleby, who is leading the National Food Strategy review, has said school meals are a “fantastic way” to get children eating well at school.

“The alternative to a school lunch is a packed lunch and only 1% of packed lunches have the nutritional value of a school meal,” he said.

Speaking on Breakfast, he said nutrition was the basis of equality of opportunity – “you can’t level up if you are not getting enough nutrition into your most vulnerable children”.

He added that the status of food, dining halls and particularly school cooks needed to be raised, saying they were “as important as any teacher”.

Members of the taskforce have also pledged to spend the next six weeks using their platforms to share stories of those affected by child food insecurity in the UK.

Richard Walker, Iceland’s managing director, said it was an issue they cared about deeply and wanted to support Mr Rashford to effect positive change.

Career highlights: The rise and rise of Rashford

Mr Rashford has stressed the importance of tackling the stigma around child food poverty, and changing attitudes about asking for help.

He told the BBC: “I feel like at times people think they are being looked down on if they ask for help, and I think in this generation… that is something that should change.

“You should feel free if you want to ask for help for anything,” he said. “Hold your head up high and if you need help go and get help.”

The footballer has met some of the families who have benefitted from the extended children’s food voucher scheme, which he said had been an “unbelievable experience”.

“Just to see the smiles on their faces and to see how much it’s helped them, you know, made me happy,” he said. “It was good to see the parents laughing and smiling.”

During the coronavirus lockdown the government provided vouchers to families whose children qualify for free meals, but it had insisted this would not continue into the summer holidays.

This prompted the England footballer to write an open letter to MPs, drawing on his own experiences of relying on free school meals and food banks growing up in Wythenshawe, Manchester. He called on the government to reverse its decision – which it did shortly after he spoke out.

The U-turn enabled about 1.3m children in England to claim vouchers over the holidays, with the support working out as about £15 a week for each child.

Have you used school meal vouchers over the summer? Have you struggled to get access? Please share your experiences by emailing haveyoursay@bbc.co.uk.