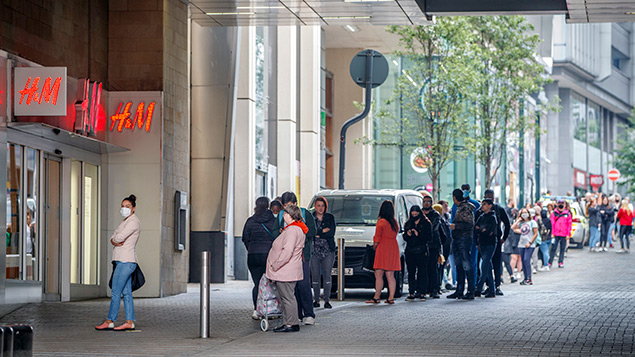 People at a Leeds H&M as non-essential shops in England open their doors for the first time since lockdown began. Photo: Danny Lawson/PA Wire/PA Images

Flexible furlough guidance published by HM Revenue and Customs on Friday night reveals that from 1 July employees will no longer have to be furloughed for a minimum period of three weeks.

The guidance – described as “complex” and “horrible” by legal experts – details the chancellor’s approach to the Coronavirus Job Retention Scheme’s winding down with new part-time furloughing rules. It changes much of the existing guidance and adds new documents.

From 1 July, the furlough scheme has more flexibility allowing CJRS claims on a pro rata basis. Employees can work some of the week and be furloughed for the remainder, in proportions to be agreed with their employer.

To be eligible for furlough from July, the employee needs to have been furloughed for at least three consecutive weeks between 1 March and 30 June. Employers also face a cap on the number of CJRS claims they can make after 1 July, limited by the maximum number of claims made in any single instance between March and June.

For example, if an employer had previously submitted three claims between March and June, in which the total number staff furloughed were 30, 20 and 50 employees respectively, then the maximum number an employer can furlough in a single claim will be 50.

The only exemptions are for employees returning from parental leave for whom the eligibility criteria and claim caps may not apply.

Employers also need to be aware that the minimum claim period allowed is now seven calendar days and the maximum number of CJRS claims per month is four.

Kate Palmer, associate director of advisory at Peninsula, said: “Employers will welcome the guidance on flexible furlough that was released late on the evening of Friday 12 June, though possibly not the format it was provided in. Amendments to several different documents, and further newly created ones, made it difficult to track what is actually changing and how.”

Daniel Barnett, barrister in employment law at Outer Temple Chambers, said: “The way the information was released was by making changes to most of the existing guidance, and by issuing three new pieces of guidance. It’s simply horrible.”

From July, HMRC will continue to cover 80% of furloughed employees’ wages up to a cap of £2,500 – from August, the government payments will be the same as before, but employers must cover national insurance and pension contributions.

One key question that furloughing employees on a part-time basis raises is, what constitutes their “usual hours”? The CJRS says the usual hours of employees who work variable hours should be calculated by using the wages from the corresponding calendar period last year or the employee’s average wage for the 2019-20 tax year – whichever is higher.

For employees on a fixed salary, their usual pay is that of their last pay period before 19 March 2020.

The HMRC guidance comes as many businesses in the non-essential retail sector in England reopen their doors today. Social distancing requirements – similar to those used in supermarkets – mean that many stores will be operating with reduced headcounts so part-time furloughing could help rotate staff and stave off redundancies.

John Lewis is opening two stores today with 11 others to follow later this week. Andrew Murphy, executive director of operations, said: “We expect this situation to last well into autumn and perhaps winter so we need to be thinking ahead for how things will work when the weather’s not so great”.