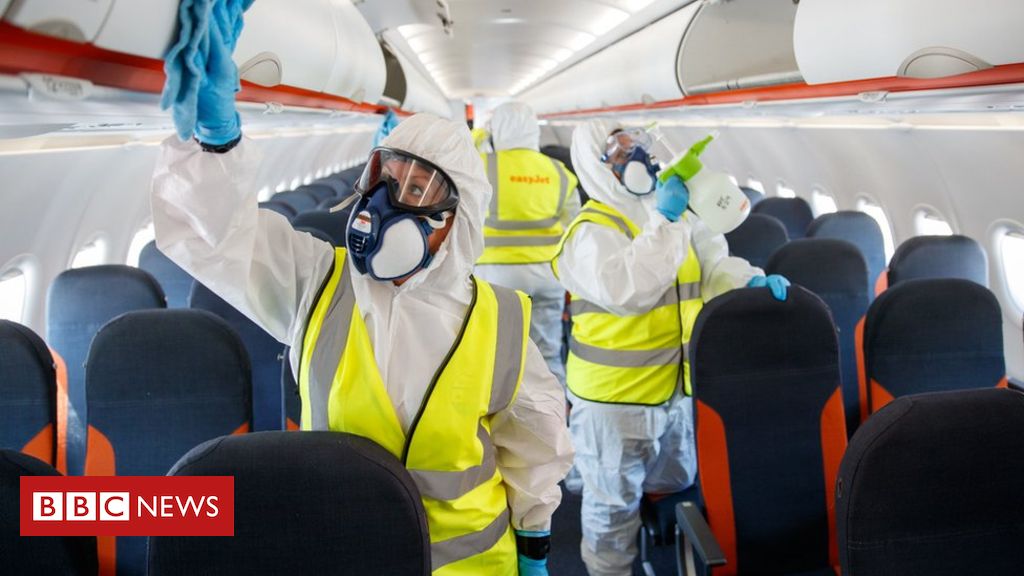 EasyJet hopes to reopen 75% of route network by August

EasyJet hopes to reopen 75% of route network by August


EasyJet says it hopes to resume flights on 75% of its route network by the end of August, although the number of daily services will still be significantly down for a normal summer season.

The airline is already starting limited services this month, as it adjusts to the coronavirus collapse in air travel.

Customers and cabin crew must wear face masks, and no food will be served.

EasyJet is axing 4,500 jobs, and could be ejected from the FTSE 100 this week because its share price has tumbled.

However, news of a slow return to services, along with what the airline claimed was its biggest ever summer promotion, helped to push EasyJet’s share price 2.75% higher on Tuesday.

EasyJet said half of its network would be reopened by the end of July, increasing to 75% during August.

“Flights will be at a lower frequency than normal, meaning the airline will operate at around 30% of its normal capacity between July and September,” the airline said.

The carrier said services would operate from all its UK bases.

EasyJet previously announced it would resume operations on 15 June, with flights mainly restricted to domestic routes in the UK and France.

Rival Ryanair has operated a very limited schedule of flights during the pandemic, and has said it is planning to resume 40% of its “normal flight schedules” in July.

EasyJet is introducing a series of safety measures, including requiring passengers to wear face masks at airports and on aircraft.

It has produced thousands of face mask covers inspired by comic books to be handed to children flying on selected routes in an attempt to ease their anxiety about the new rule.

Other steps to boost hygiene include not selling food during flights, enhanced cleaning of planes, and disinfection wipes and hand sanitiser being provided.

Passengers will be invited to sit away from people not in their party on flights with empty seats.

EasyJet’s chief commercial and planning officer, Robert Carey, said: “We are delighted to announce that we will be flying the majority of our route network across Europe, meaning customers can still get to their chosen destination for their summer holidays this year.”

The airline industry has been one of the hardest hit sectors since the UK and other countries went into lockdown. Aviation bosses are in talks with the UK government about controversial quarantine measures

And on Monday, Spain’s tourism minister cast doubt on the prospect of an early return by UK holidaymakers to Spanish beaches.

María Reyes Maroto said British coronavirus figures “still have to improve” before Spain could receive tourists from the UK.

EasyJet says its planned destinations include Spain and other major European tourist hotspots, but the final list and timings will only emerge as various country restrictions are eased and customer demand increases. “There are a lot of moving parts,” a spokesman said.

Have you booked or are you planning to book EasyJet flights this summer? Tell us about your experience by emailing haveyoursay@bbc.co.uk.