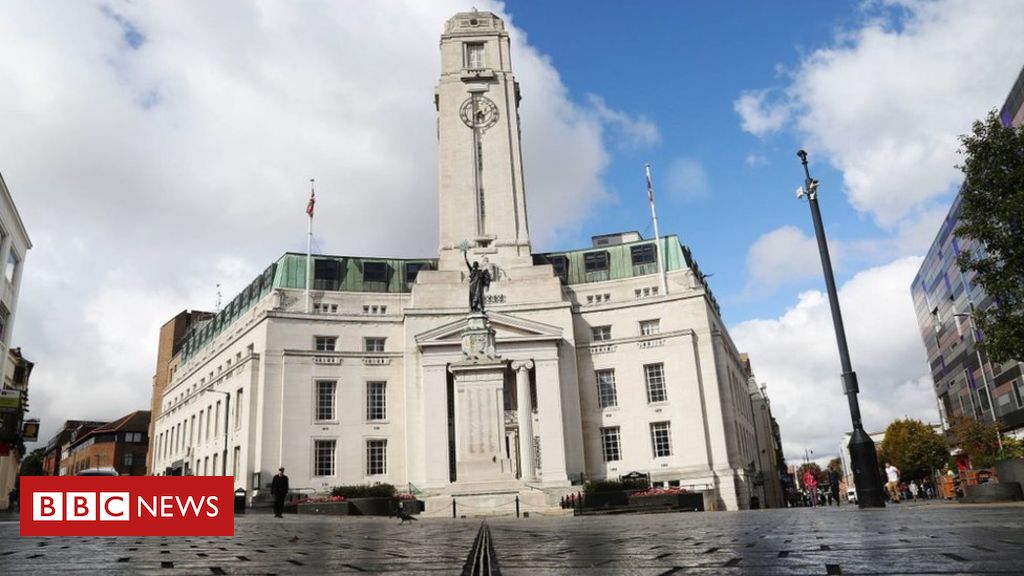 Coronavirus: What a shrinking economy means for Luton

Coronavirus: What a shrinking economy means for Luton


The UK economy shrank by a record 20.4% in April as England spent its first full month in lockdown because of the coronavirus pandemic. What does this number mean for a town such as Luton, which largely relies on the movement of people?

‘I can’t wait to get back to normality’

Nakotey Jackson Odjidja was made redundant from a footwear company when lockdown began.

“For me personally I’m losing my spirit a little bit with not working and being forced to stay home,” the 39-year-old, from Luton, said. “I can’t wait to get back to normality.”

Mr Odjidja has signed up with a recruitment agency to help him find work, but he lives in a town that his council says is one of the most vulnerable to the financial impact of coronavirus.

“Things are gradually starting to open up in the town and there are a few shops open in The Mall [shopping centre] now, so the mood is starting to pick up but I think there will be a lot of suffering after all of this.”

In normal circumstances, April would have seen countless holidaymakers flock to the town as a gateway to their Easter break destination of choice.

Luton Airport is the UK’s fifth busiest airport – with more than 18 million users in 2019 – and any loss of travellers inevitably causes ripples to be felt in the local economy.

About 40% of the area’s employment relies on a fully functioning airport, says Luton Borough Council.

Travel firm Tui, which has a base in Luton, has warned 8,000 jobs would go as it tries to cut costs by 30% in a major restructuring.

The airline EasyJet has its headquarters in the town, and has said it will cut up to 30% of its workforce – about 4,500 jobs – as it struggles with a collapse in air travel caused by the virus pandemic.

An employee for the airline, who was furloughed at the start of lockdown, said it had been a “difficult time” with “reduced pay on furlough and then redundancies”.

“Friends and colleagues are affected and we are all going through some pain,” he said.

The employee said despite the situation, EasyJet have been “very good” and “tried to support as much as they can through furlough top up payments and enhanced voluntary redundancy options”.

In 2017, Luton lost another big employer when the airline Monarch collapsed. Last year the airline’s engineering arm, which was based at London Luton Airport, went into administration – leading to the loss of 408 jobs.

The EasyJet worker, who wanted to remain anonymous, said: “We lost Monarch recently and whilst I am confident EasyJet and Tui will survive there will be some short term damage to people.

“I hope the desire to sit on a beach and go on holiday helps the industry to recover quickly, although projections are not as optimistic.”

Suresh Pulandaran works for the airport in security and operations “making sure the whole airport runs smoothly”.

The 51-year-old said that his team have gone down from having 50-70 staff on each shift to a “skeletal staff” of about 20.

He has also seen jobs within the airport being lost including baggage handlers, aircraft cleaners and check-in staff.

Mr Pulandaran said the whole situation has left him feeling “very, very sad” and he likened it to when planes were grounded in 2010 because of a volcanic eruption in Iceland.

“I’ve been in love with the airline industry since a young age.

“The industry taking a hit like this is very surreal, looking up to the sky and not hearing a plane flying or taking off from Luton was very unreal.”

In what could be seen as a further blow to the airline economy, from Monday, people travelling to the UK have faced a fine of up to £1,000 if they do not quarantine for 14 days.

Airlines British Airways, EasyJet and Ryanair have launched legal action against what they call a “flawed” policy, claiming it would have a “devastating effect on British tourism and the wider economy”.

What has been the wider impact?

Recent analysis by the Centre for Cities found that Luton, with a population of more than 200,000, was in the top 10 in the UK for places where jobs are most at risk of furloughing.

Government figures show that more than 25,000 people in Luton have been placed on the furlough scheme.

And it is not just those in the airline business that have been affected.

Vehicle company Vauxhall halted production at its Luton plant – which employs 1,600 – for about two months before restrictions imposed to tackle the coronavirus pandemic were loosened.

The Recruitment and Employment Confederation has also found the number of active job postings in Luton has been decreasing steadily for the past few weeks, by about 1-2% per week.

What will happen next?

To help fund its local services, Luton Borough Council uses profits from the airport, which it owns, but has projected a £37m drop in airport revenue amid a “catastrophic” drop in passenger numbers.

That has contributed to what the council calls a “massive” £49m shortfall in its finances, leaving it needing to make £22m in cuts in an emergency budget.

Finance portfolio holder Andy Malcolm called the position “stark” and acknowledged the cuts were “not going to be pleasant”.

The council’s Labour leader, Hazel Simmons MBE, has said the authority have lobbied the government “relentlessly to understand the dire situation” the town is in.

She pleaded with government to “give us the support we need to avert catastrophe in Luton”.

A Ministry of Housing, Communities and Local Government spokesman said: “Luton Council has received £11.26m of emergency funding to tackle the pressures they have told us they’re facing while their core spending power rose by over £8.9m this financial year even before the additional funding was announced.

“We recognise some councils with strategic investments, such as airports, are put in an exceptional position by this crisis.

“We’ll continue to work closely with Luton Council to help them navigate through this difficult situation, so they can continue to serve their local community.”