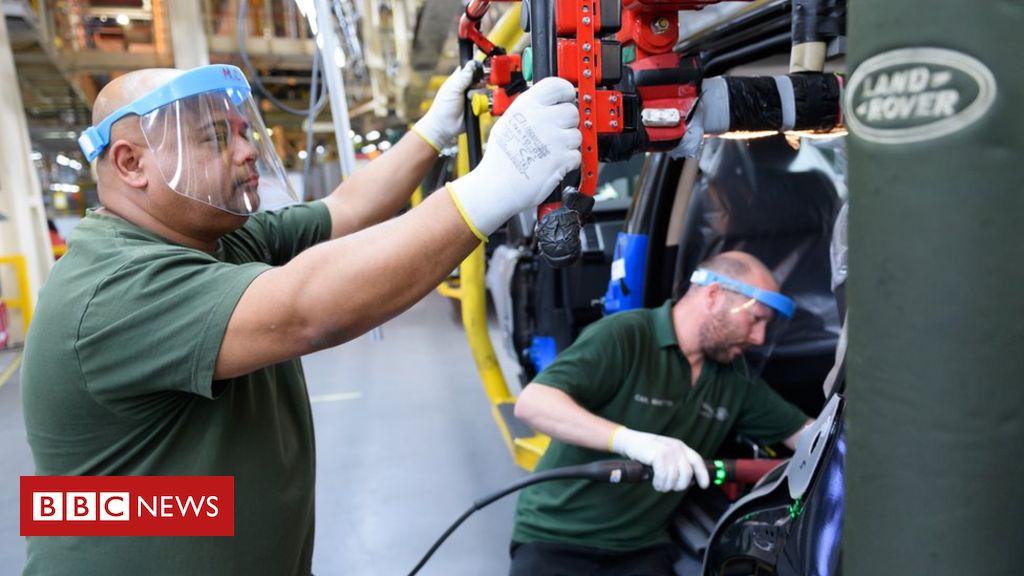 
British car manufacturing came to a screeching halt in April, down 99.7% against the same month last year.

It was the lowest output since the Second World War, according to the industry body, Society of Motor Manufacturers and Traders (SMMT).

Just 197 premium and luxury sports vehicles rolled off factory lines, with 45 of those sent to UK customers.

Instead, some plants refocused to make 711,495 items of personal protective equipment for health workers.

“With the UK’s car plants mothballed in April, these figures aren’t surprising but they do highlight the tremendous challenge the industry faces, with revenues effectively slashed to zero last month,” said SMMT chief executive, Mike Hawes.

The loss of 400,000 cars that would normally have been made is expected to cost the British car industry up to £12.5bn in revenues.

In April there were 830 new car engines made at UK plants, 781 of which were exported. This level was down 99.5% on the year before.

Mr Hawes said ramping up the industry again would be a “gradual process”. Half of the UK’s engine and car makers are expected to head back to work this week.

Production timescales will be staggered with strict social distancing measures in place. The SMMT has suggested to car manufacturers that factory workers should be provided with PPE.

Car manufacturers are also expected to work with fixed teams and with partnering to limit the number of people who interact on a daily basis.

Before production mostly stopped, the few cars that were produced were luxury cars from brands like McLaren, Bentley and Rolls Royce.

It takes about a month to assemble a high end luxury sports car.

Although production of vehicle lines had stopped, the finishing touches were still being applied to 197 luxury cars that were sent to customers.

With normal factory work on hold, the industry redirected its capability towards manufacturing PPE for healthcare workers.

Face shields, visors and medical gowns were pieced together in car factories. Rolls Royce and McLaren were among the companies which helped to make medical equipment such as ventilators.

Although the car industry is progressing with plans to slowly resume production, but unions say a severely weakened industry needs urgent government help.

Steve Turner, Unite assistant general secretary, said: “We urgently need a sector plan to support the UK’s world class auto industry through this crisis, with investment to defend jobs and support for a transition to electrification.

“The French and German governments have wasted no time in getting behind their manufacturing workers.”

He said that in both countries, governments are using the shutdown to intervene, with taxpayer support, in return for a transition to a greener domestic industry and support for their local supply chains.

“The UK government needs to match this ambition, proudly talking up our manufacturing champions and working with unions to recover and meet the challenges of the future, sustaining and creating quality jobs and apprenticeships,” he said.