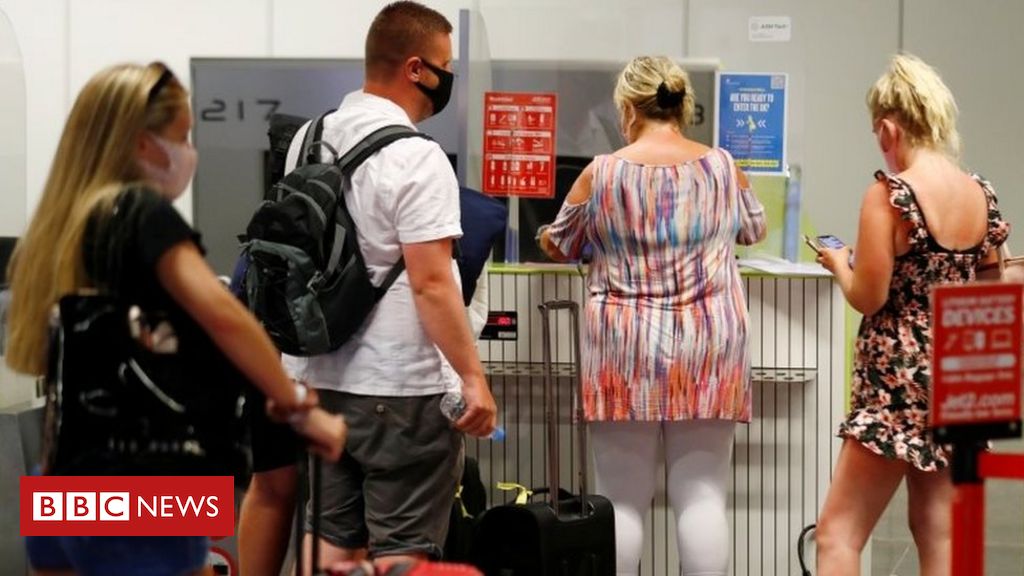 
Travellers arriving in the UK from Spain must now quarantine for 14 days, under new coronavirus travel rules.

They were announced on Saturday following a spike in coronavirus cases in Spain, with more than 900 new cases of the virus reported on Friday.

Spanish officials have also warned a second wave could be imminent as major cities have seen cases surge.

Airlines including British Airways have criticised the new measures as “yet another blow” to British holidaymakers.

And Rory Boland, editor of consumer rights magazine Which?, said many travellers would be “deeply angry” that the government did not make the decision 48 hours earlier “before tens of thousands of them flew off for their summer holidays in Spain”.

“Many would not have travelled if they had known they’d face 14 days of quarantine on their return,” he said.

Prof Jonathan Van-Tam, deputy chief medical officer for England, said the timing of such a measure will never suit everyone.

“Whenever a decision is made there will always be people who have just left the UK,” he said.

“So there is no magic time at which to do this. The thing that we have to do is do it as soon as we are certain about the data.”

People currently on holiday in Spain have been advised by the Department of Transport to follow the local rules, return home as normal, and check the Foreign Office’s travel advice website for further information.

The Foreign Office is advising against all but essential travel to mainland Spain. Quarantine measures apply to those returning from mainland Spain, the Canary Islands and the Balearic Islands, such as Majorca and Ibiza.

It is unlikely that any travel insurance will be valid where the Foreign Office advice states UK residents should not travel, according to BBC personal finance reporter Kevin Peachey.

Among those affected by the new rules is Transport Secretary Grant Shapps, who began his holiday in Spain on Saturday. He is expected to continue his trip as planned and isolate in line with guidance on his return.

Lois Stothard, from South Yorkshire, told the BBC she had booked a holiday to Seville as a surprise for her boyfriend’s 30th birthday – due to fly out on Sunday morning – but now feels that she cannot travel.

“I’m a key worker – I’m a teacher – and my boyfriend has work commitments so we cannot quarantine for 14 days when we return,” she said.

“We can’t get any money back and to change the company want double what I’ve already paid in fees. I’m very disappointed and upset as we’re packed and ready to go.”

John Blackmore, from Hampshire, was also due to fly out to his family in Spain with his wife and two young children. But the new rules mean he has had to cancel, for fears his wife’s employer would not be able to accommodate her taking an extra two weeks off to quarantine on their return.

He said he thought it was unlikely they would get a refund for the flight, as it has not been cancelled.

“I’m devastated,” he told the BBC. “I have family in Spain who haven’t seen their only grandkids since Christmas.”

The government is urging employers to be “understanding of those returning from Spain who now will need to self-isolate”.

But Labour’s shadow home secretary Nick Thomas-Symonds called for the government to explain in detail how it would support those affected, adding that the news would be “deeply concerning for families who are in caught in Spain or are planning travel”.

Quarantine measures for UK travellers were first introduced in early June. But after pressure from the aviation and travel industries, the government and devolved administrations published lists of countries exempt from the rules.

British Airways said it was “disappointed” about the latest changes to the government’s travel advice and rules, although the airline said its flights were continuing to operate.

It said the move was “throwing thousands of Britons’ travel plans into chaos”.

The Airport Operators Association said the new measures would “further damage what is already a fragile restart of the aviation sector which continues to face the biggest challenge in its history”.

Spain has so far seen more than 28,000 coronavirus deaths. On Thursday, it saw the biggest daily increase in infections since its lockdown ended.

Catalonia has become the latest region to crack down on nightlife. The wealthy north-east region, which is home to Barcelona, ordered all nightclubs to close for two weeks and put a midnight curfew on bars in the greater Barcelona area.

The BBC’s Guy Hedgecoe in Madrid says contagion among young people is a particular worry, as they have been gathering in large numbers in cities at night.

France has warned its citizens not to travel to Catalonia while Norway has said it will start quarantining people arriving from Spain.

The UK’s biggest tour operator, Tui, cancelled its flights due to depart to mainland Spain and the Canary Islands on Sunday. Customers currently on holiday will be able to return on their intended flight home.

However, budget airline EasyJet said it was “disappointed” and would operate a full schedule in the coming days.

“Customers who no longer wish to travel can transfer their flights without a change fee or receive a voucher for the value of the booking,” the company said in a statement.

A spokesman for the Association of British Travel Agents (Abta) said the government’s quarantine rule change was “disappointing”.

“We suggest the government considers lifting the quarantine rules for flights to and from certain regions with lower infection rates, or to places such as the Balearic Islands or the Canaries – which are geographically distinct from mainland Spain – to avoid further damage to the UK inbound and outbound tourism industries,” he said.

Scottish First Minister Nicola Sturgeon tweeted that the decision was made after reviewing the latest data earlier on Saturday.

“This reinforces the point that these matters are subject to change at short notice and so my advice is to be cautious about non-essential foreign travel,” she said.

Are you in Spain? Are you planning to travel to Spain? What do you think about the quarantine? Share your experiences by emailing haveyoursay@bbc.co.uk.