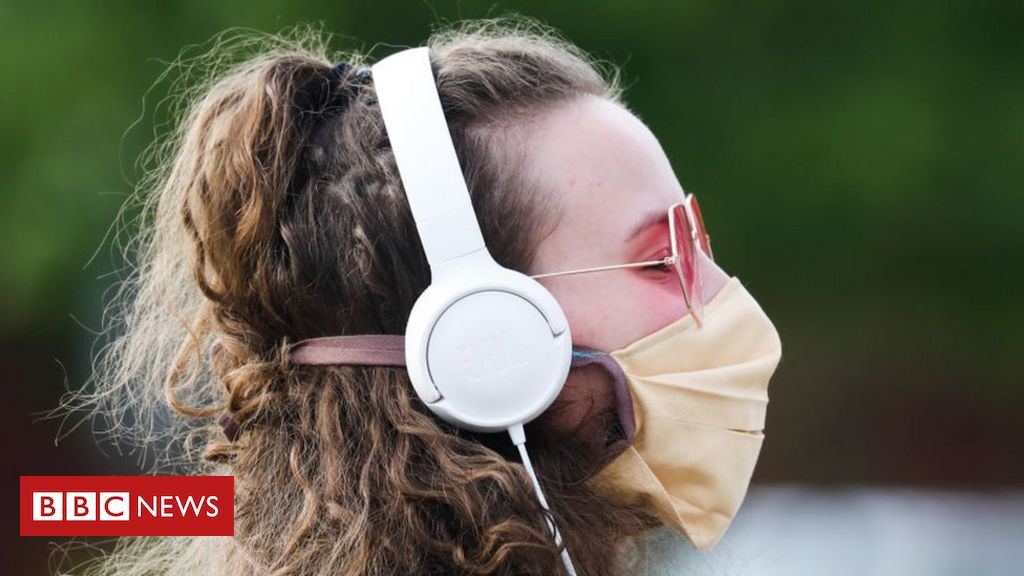 Coronavirus: How music played on in lockdown

Coronavirus: How music played on in lockdown


You can’t stop the music, as one old disco song says – but one way or another, coronavirus has come pretty close.

At the height of the pandemic, with record shops shut and labels struggling, the flow of new album releases slowed to a trickle.

Now the industry is starting to pick up the rhythm again but shoppers are still reluctant to visit the High Street for new LPs and CDs.

In lockdown, we have learnt to order more albums online and the way we use music streaming services has changed as well.

And while live music can resume in England from this weekend, it is likely to be on a restricted basis, as social distancing measures mean fewer paying customers will be allowed into venues.

So how have different sectors of the music business coped?

“It’s been challenging, to say the least,” says Adam Velasco, managing director of Cherry Red Records, an independent label that is one of the biggest companies in the music reissue market.

Physical albums are big sellers for the label and its box sets are highly prized by collectors.

At the start of the pandemic, distributors and warehouses around the world were closing down, forcing the company to cut back on new releases.

“There was no point in planning things for May and June. Who knew where we were going to be?” he says. “But we just did the best we could to engage with our fan base.”

That meant offering discounts, flash sales and other special offers through the Cherry Red website.

It also meant responding to customers “of a certain age” who rang in to say that they were not on the internet and didn’t know where to buy physical albums while record shops were shut.

But the effort paid off, with the label’s big sellers under lockdown including the Residents’ new album, Metal, Meat & Bone, plus deluxe reissues from artists such as Be Bop Deluxe and Laura Branigan.

Cherry Red resumed its release schedule in July, earlier than many of its competitors. “We were confident that we were getting to our fans and people were hungry to buy new releases,” says Mr Velasco.

Before the pandemic struck, music retailer Rough Trade was selling more records than ever, with like-for-like 2019 UK sales up 25% overall.

Its model of staging in-store gigs, with admission free to those who bought the band’s album, had proved a successful way of selling physical releases in the age of streaming.

But then Rough Trade Retail had to close its four UK shops and director Stephen Godfroy says, “We will need a strong second-half recovery if we expect to end the year with sales matching 2019.”

Now the shops are open again, although with fewer people in them. At the same time, the retailer has seen online sales rise so much that it had to set up a dedicated online fulfilment warehouse.

“In essence, we’ve been forced to become an online-led business in just a matter of weeks,” says Mr Godfroy.

Another independent record shop, Banquet Records in Kingston, has taken a different approach.

Rather than reopen the premises completely, the shop is directing customers to its website and offering a click-and-collect service from its car park.

Jon Tolley, who runs the business, says that having to restrict customers’ browsing in his “small and dingy” shop felt “too regimented and not what we’re about”.

Digital music, naturally, is not prone to the same distribution and sales problems that have plagued vinyl and CD sellers.

But according to streaming service Deezer, the way people use its service has fluctuated considerably during the pandemic.

Music consumption in the UK dipped when lockdown was first announced, the service said, but had risen again by the end of May.

In the meantime, however, a few things had changed.

While confined to their homes, Deezer users were no longer streaming during the popular “commute time” of 06:00 to 07:00, but were beginning their daily listening at 09:00 to 10:00.

Users were also streaming through TVs, game consoles and smart speakers instead of mobile devices, although those are now enjoying renewed popularity.

“By June, listening had really bounced back in the UK. Overall music streams were 63% higher in June than they were during March and the peak of the pandemic,” a Deezer spokeswoman said.

Deezer said that users’ music choices also reflected the public mood, with some spikes in listening corresponding to government announcements.

“When lockdown first started, Deezer saw big increases of streams for ‘calm’, ‘feel good’ and ‘happy hits’ playlists in the UK and across the world,” the service said.

Despite the easing of lockdown measures this weekend in England, many music fans may still be wary of going to gigs.

The places that host concerts are struggling to stay afloat, despite an injection of government money for up to 150 small music venues in England.

Banquet Records used to stage 200 gigs a year at local Kingston venues, but says it has given up hopes of doing so before the end of 2020.

With far fewer opportunities to play live, the crisis is hurting artists, who rely on income from touring and merchandise sales, says Cherry Red’s Adam Velasco.

“We’re trying to keep their spirits up and thinking of releases to help them,” he adds.

But he is looking ahead to this year’s much-postponed Record Store Day, which will now take place on three separate dates: 29 August, 26 September and 24 October.

And as other labels catch up with Cherry Red and revert to normal schedules, October promises to be “an absolutely rammed month for new releases”, Mr Godfroy says. So there’s something for music fans to look forward to.