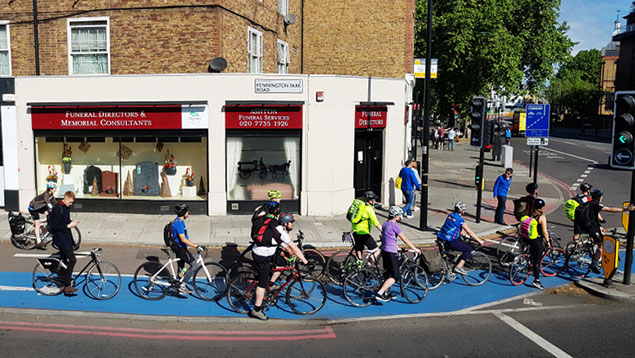 Scenes of crowded tube trains returned to London this morning, within hours of the Prime Minister’s updated guidance on the lockdown.

BBC transport correspondent Tom Walker tweeted at around 8am, accompanied by a picture of commuters standing in a carriage: “Very busy on the early tube – this was Jubilee line first thing. Then commuters tell me it eased but noticeably busier than last week with more construction/office workers. Complaints many not wearing masks.”

Rail unions rounded on Boris Johnson’s pre-recorded announcement, with the RMT telling its members across rail and tube to “refuse to work where safety is compromised due to the potentially lethal consequences of the government’s confused and contradictory messaging over the Covid-19 lockdown”.

The Prime Minister stated that further details would be available later today regarding plans to ease the lockdown, but there has been confusion around whether those who cannot work from home should travel to work – and if so, how they get there.

He said: “And we want it to be safe for you to get to work. So you should avoid public transport if at all possible – because we must and will maintain social distancing, and capacity will therefore be limited.”

He added: “And when you do go to work, if possible do so by car or even better by walking or bicycle.”

The scenes witnessed by the BBC’s Tom Walker this morning then could be interpreted as a sign that for many people who need to travel to work, none of these options is a viable possibility. Or the relative speed of public transport makes it impossible to resist as a travel option, despite its inherent social distancing problems.

Many commentators have also drawn attention to governments in Wales, Northern Ireland and Scotland adopting a far more cautious approach to the easing of lockdown.

On Saturday (9 May) the government announced a £250m plan for new pop-up protected cycle lanes, the widening of footways and extra support for car free, cycling, bus and walking streets to allow for social distancing.

CEO of Sustrans (cycling charity and custodian of the National Cycle Network) Xavier Brice said: “This funding is a first step that allows more local authorities to put temporary measures in place so more people can move around safely and actively as we emerge from the Covid-19 crisis.

He said the £250m short-term plan, part of a £2bn programme for cycling and walking was “the next step in helping to create real long-term change in the way we move around our towns and cities and should also be used to help support people new and returning to cycling”.

“As we begin to rebuild after this devastating Covid-19 pandemic, we encourage all local authorities to use this funding as soon as possible to make the changes needed.

Brice said: “It is imperative going forward that we don’t solve one crisis by perpetuating others and instead create healthier, happier and greener places that we all want to live in.”

The RMT accused the government of “unleashing a surge in passengers on rail and tube … breaching social distancing measures with potentially lethal consequences for both staff and th‎e public”.

NEW: Very busy on the early tube – this was Jubilee line first thing. Then commuters tell me it eased but noticeably busier than last week with more construction / office workers. Complaints many not wearing masks. (DMs open & confidential) pic.twitter.com/p8O1tDGhbH

It added that no agreement had been made to change any working practices or social distancing arrangements from this week going forward.

RMT general secretary Mick Cash said the union would not “sit back while confused and conflicting messaging from the government raises the prospect of a surge in passengers on our transport services, making a mockery of the social distancing rules with potentially lethal consequences”.

Jim Thompson, manager of Comptons cycle shop in south east London: “We’ve seen three times the normal amount of orders and, speaking to suppliers, it’s like that across the board.” Commuter bikes have been the most popular option for the store, including e-bikes and fold-up models, either purchased individually or through the cycle to work scheme.

Comptons, like many bike shops, has sought to remain open throughout the lockdown. “We created a quarantine zone … one at a time, so at weekends we have a queue outside sometimes 10 deep. He said investing in infrastructure was the way forward. “They must invest in infrastructure,” he said, which would improve safety and lead to a tipping point: “The more cyclists there are the more cautious drivers will be.”

Companies may have to invest more in shower and secure bike-parking facilities in the months ahead, but cycling will not be an option for that many people because of distances and safety fears.

Trish Greenhalgh, professor of primary care health sciences, Nuffield Department of Primary Care Health Sciences, University of Oxford, was highly critical of the Prime Minister’s strategy: “It looks like the PM is trying to implement the “have cake and eat it” maxim he popularised in a previous life. Anyone unable to work from home should now return to work from work – though they are also advised to avoid public transport, so it’s not clear how they will get there.”