‘Coming here is a necessity’: demand for food aid soars in US amid job losses | Global development

‘Coming here is a necessity’: demand for food aid soars in US amid job losses | Global development


Neisha Davis cradles brown paper lunch bags in the crook of one arm, while holding on to Demitri, her wriggling baby son, in the other and keeping a careful eye on Naya, her four-year-old daughter, as she runs around the church car park with another little girl.

It’s hectic but the free packed lunches have become a crucial part of their daily nutrition. So everyday at noon the family make the two-mile journey from Homewood, a low income predominantly African American Pittsburgh neighbourhood with no grocery stores, to the East End Community Ministry’s pop-up lunch stall in East Liberty.

“The lunches help a lot, the food is healthy and it fills them up, the food stamps are never enough,” said Davis, 36, who has enough freshly cooked hot dogs, fruit pots, carrots, and milk and juice cartons for her eldest two children who stayed home.

Once a week or so Davis also picks up groceries from the food pantry which provides fresh produce rarely available at her local convenience stores. “I was raised to be humble, and right now I’ve no work so I need help. The alternative would be my kids going hungry.”

Davis is not alone. The number of people relying on the pantry is up 150% compared to pre-pandemic times.

And it’s not just here: nationwide the demand for aid at food banks and pantries has soared amid unprecedented job losses and the worst unemployment rate in modern times.

A recent census bureau survey found 12% of American households did not have enough food sometimes or often during the previous week – compared to 9% before the pandemic. For families the situation is even worse, with 15% of households with children now experiencing food insecurity.

An estimated one in four children, the equivalent of 18 million minors, could need food aid this year – a 63% increase compared to 2018, according to analysis by Feeding America, the national food bank network.

This pandemic has also exposed – and exacerbated – structural inequalities including access to affordable, nutritious food. Overall, almost half the city lives in a food desert – a neighbourhood with high rates of poverty and no supermarket within half a mile – but black residents are disproportionately affected.

“There’s enough food, it’s about who gets access to quality food,” said Carlos Thomas, 29, one of the Pittsburgh’s few black cordon bleu chefs and cofounder of Feed the Hood, a project training young chefs and serving up nutritious meals to underserved communities in food deserts like Homewood.

According to the census bureau, half of all adults – 105 million – reported feeling down, depressed or hopeless on at least several days during the third week of July. Then, one in nine Americans were reliant on unemployment benefits to cover living expenses.

Davis used to worked 25 hours a week as a home healthcare assistant, helping the sick and elderly with shopping and meal prep while juggling school runs and daycare for her children aged one to 14.

The lockdown made working impossible, however the family was better off as the federal stimulus cheque and unemployment benefit helped Davis catch up on bills, and buy some much needed furniture and shoes for the children – items she usually struggles to afford.

At the end of July, the weekly $600 enhanced unemployment benefit ended for millions of Americans due to a partisan stalemate over the next federal stimulus bill. Senators went home for recess, but for ordinary people the money worries continued.

“The money stopped but the bills won’t, and winter is coming so the gas bill will get really high, it’s very frustrating and worrying. I’m hoping the pandemic ends or the unemployment is sorted… until then I’ll have to juggle things, make the food last longer,” said Davis.

“We don’t talk enough about the mental health implications of food insecurity, and the courage it takes asking for help,” said Lisa Scales, president of the Greater Pittsburgh Community Food Bank.

In Pennsylvania, where more than 2.03 million people have applied for unemployment since mid-March, the number of households receiving food aid has more than doubled. The statewide unemployment rate rose to 13.7% in July, while nationwide it fell to 10.2%, according to the Bureau of Labor statistics.

Unemployment figures suggest that the job market is recovering more slowly in the Pittsburgh and surrounding counties than the rest of the state and country.

But it is not just the unemployed who are going hungry. Before the pandemic, the working poor made up a large proportion of food bank users. Now, competition for work is higher, with about 14 million more Americans unemployed than there are job openings, and more low wage workers are struggling.

Shafon Willis, 35, also a healthcare assistant, went back to work in June but her hours have been cut by 50%. This is her second time at the food pantry, and she’s taking home eggs, fish sticks and lots of bread.

The coronavirus infection rate has recently stabilized in Pennsylvania, with 600 to 800 new cases each day, but experts fear a winter surge and Willis fears its consequences.

“I’ve spent my money keeping up with bills, I need food … this is stuff the kids will eat, we’re now eating to survive,” said Willis. “My biggest concern is that we shutdown again and now there’s no unemployment.”

Beaver county, situated 40 miles northwest of Pittsburgh bordering Ohio and West Virginia, was once home to some of the world’s largest steel mills, but the industry’s demise has contributed to a 20% decline in the population since 1980.

At least 73 people have died from Covid and the 14.5% unemployment rate is one of the highest in the region.

The Faith Restorations pantry in Monaca currently provides food to a thousand or so people each week – compared to 300 before the pandemic. At the peak of the lockdown, as many as 3,000 people relied on the pantry for weekly groceries.

Honestly, I’ve broken down thinking about food. I’m here because I can’t let my pride stop me from doing what I need to do

On one night last week, volunteers had pre-packed 102 shopping carts of food with bagels, meat, coleslaw, milk, bananas and a party sized frosted cake. Everything was gone within an hour. The elderly, mostly maskless, volunteers scrambled to prepare more boxes, as dozens of cars waited in line.

Among them was first-timer Marissa Campbell, 39, a school bus driver with two children, aged five and 12, who’s desperately worried about making ends meet without the federal unemployment cheques.

“Honestly, I’ve broken down thinking about food. I’m here because I can’t let my pride stop me from doing what I need to do. Without this, I don’t know what I’d have done at the end of the week.”

Campbell blames the Democrats for the impasse on the stimulus bill. “The Republicans were trying to help us, but the Democrats wanted to add unrelated things,” she said.

Campbell’s youngest child Lilly has underlying health issues, but for financial reasons she is desperate to get back to work. “Half the county was shutdown but I don’t know anyone with the virus. It’s very stressful but we have to open back up, people have to live.”

It’s been a tough few months for Mike Wooley, who’s survived off odd jobs and food aid since losing his cash-in-hand restaurant job in March. He didn’t qualify for unemployment. “Coming here is a necessity, without this I’d be really struggling… Look at the queue [of cars], it doesn’t feel like we’re the richest country in the world.”

At times Wooley, 55, says he feels depressed and panicky about paying bills and getting a new job at his age, but would rather be poor than sick. He doesn’t have health insurance.

“I believe the pandemic is true, a lot of people don’t, and I want my elderly parents to be able to live out their lives … I’ve seen enough scary movies to know that we’re screwed.” 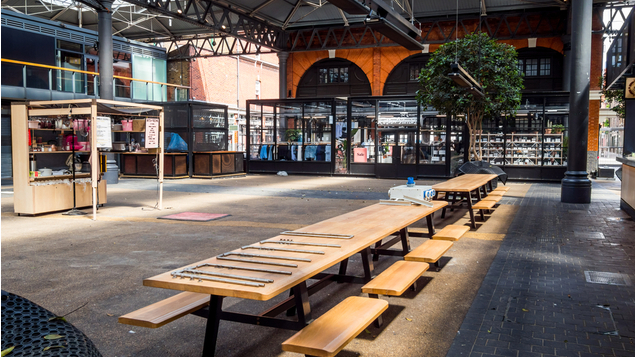