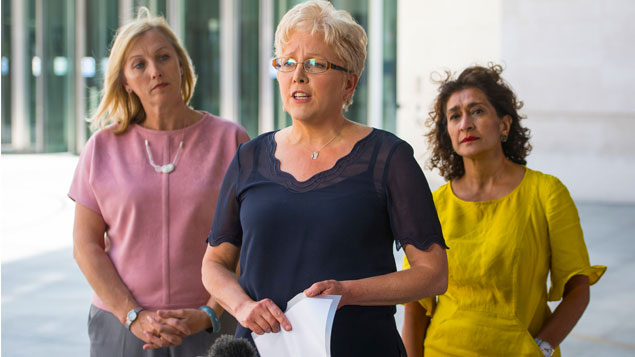 The Equalities and Human Rights Commission has defended itself as former and current BBC workers rejected its judgment that the corporation had not acted unlawfully over women’s pay at the corporation.

Despite a series of high-profile cases in which female journalists had been paid less than male colleagues in seemingly similar roles, the EHRC criticised procedures, record-keeping and communication but said nothing illegal had occurred. It said the BBC had accepted that “its historical practices were not fit for purpose and has made significant changes since 2015”.

Former BBC China editor Carrie Gracie and the BBC Women group were among those highly critical of the EHRC findings, saying they did not address the systemic issue of unequal pay, but the EHRC defended its verdict.

EHRC board member Suzanne Baxter, who led the investigation, said: “Our work here has been carried out under the Equality Act, and has a different remit to an employment tribunal.

“I do understand why there might be some surprise. Our investigation is broader, we’re gathering every piece of evidence we can, which isn’t always available to a tribunal.

“We think we’ve done robust investigations. The important thing here is the recommendations we make.” She added she was sure that the findings would make a positive difference for women at the corporation over time.

However, the BBC Women group of equal pay campaigners issued a statement which said it was deeply disappointed at the EHRC findings, which “do not reflect our experiences”.

It said the EHRC’s conclusion there was no breach of the law over pay complaints did not “address the systemic issue of unequal pay suggested by the hundreds of pay increases and settlements the BBC has made to women. Out of over 1,000 complaints, the EHRC looked in depth at only 10 cases and accepted the BBC’s excuses for why these were not ‘likely’ to be equal pay cases. We question why the EHRC discounted equal pay cases it knows the BBC has been forced to settle. New cases are coming forward and women are still heading to court. We fight on.”

Carrie Gracie, who resigned from her post as BBC China editor in 2018 as a result of pay discrimination (which the BBC later recognised), wrote on Twitter: “Seriously? FOLLOW THE ££ INSTEAD: #BBC forced to pay out to 100s of #bbcwomen. Moral of story: don’t rely on regulator but stay strong, calm, united + JUSTICE WILL PREVAIL.”

Chief executive of the EHRC Rebecca Hilsenrath added that “we’re looking at overarching systems, whereas employment tribunals look at a specific case”.

Out of over 1,000 complaints, the EHRC looked in depth at only 10 cases and accepted the BBC’s excuses for why these were not ‘likely’ to be equal pay cases” – BBC Women

She said they did find “real concerns about the overall processes which led to concerns about trust and transparency”, and acknowledged that “this is about real lives [of the women] at the centre of this investigation”.

She added: “We talked to them, they had gone though humiliation, anxiety, insomnia, were signed off work. One woman waited 370 days, another woman was passed between eight people in 10 months. These are real people having a terrible time.”

Gracie received back pay and an apology from the corporation in June 2018.

In January 2020, Radio 4’s Sarah Montague received a £400,000 settlement after being paid less than former Radio 4 co-presenters such as John Humphrys and Nick Robinson.

Also in January, Newswatch host Samira Ahmed successfully argued at an employment tribunal that Jeremy Vine was paid more than six times her salary for doing similar work on Points of View.