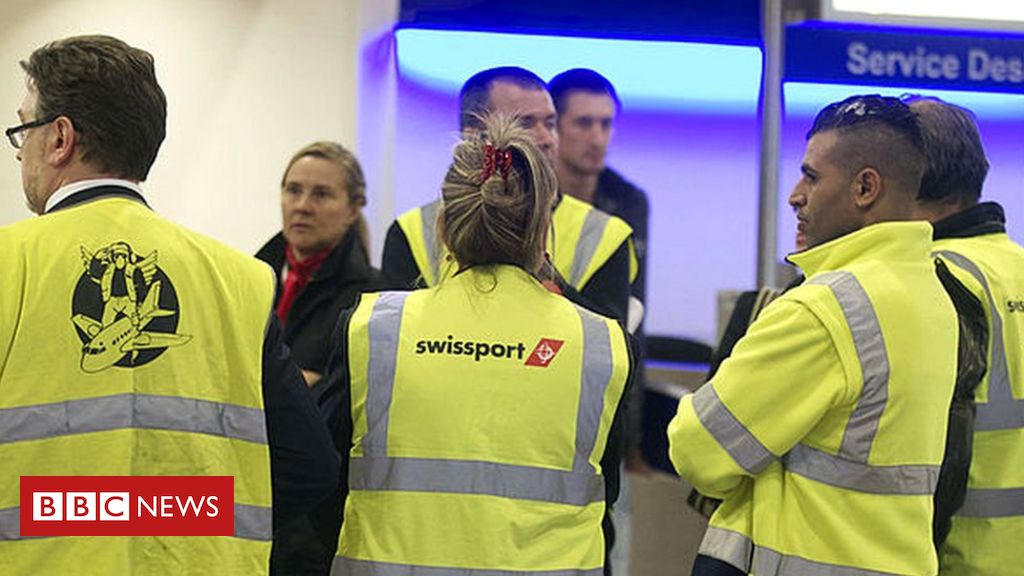 
Swissport is set to cut more than half of its UK workforce as air companies struggle with the effects of the coronavirus crisis.

It is consulting on cutting up to 4,556 jobs, the GMB union said.

Chief executive Jason Holt said the company had to reduce the size of its workforce to survive.

Swissport operates at airports across the UK, including Heathrow and Gatwick, which are among those badly hit by the crisis.

While some airlines are making plans to start flying some routes again as lockdowns lift, Swissport has said its revenue is forecast to be almost 50% lower than last year due to the crisis.

Mr Holt said in a message to staff: “We must do this to secure the lifeline of funding from lenders and investors to protect as many jobs as possible in the UK and Ireland.

“It’s true that we’ve seen tough times before – volcanic cloud, 9/11, the financial crisis – and we’ve weathered these. But this time it’s different. We have never seen anything like Covid-19 in our lifetimes.

“We are now facing a long period of uncertainty and reduced flight numbers, along with significant changes taking place to the way people travel and the way goods move around the world.

“There is no escaping the fact that the industry is now smaller than it was, and it will remain so for some time to come.”

Swissport employs about 8,500 workers at airports, including baggage handlers and check-in staff.

The GMB union said the announcement was “devastating news”, with jobs set to be lost that were essential for regional economies.

Nadine Houghton, national officer of the GMB, said: “With Swissport now considering job cuts on this scale we have deep concerns about the viability of many of our regional airports and the benefits for regional connectivity that they bring.”

Oliver Richardson, national officer of Unite, said: “We can’t wait any longer, the UK government needs to urgently intervene with a bespoke financial package and an extension of the 80% furlough scheme for the aviation industry.”

The Department for Transport has consistently said that while the aviation sector is important to the UK economy, all firms, including aviation companies, should first explore existing government schemes and try to raise capital from investors before the government will consider the situation of individual firms.

The company provides essential services for most UK airports and airlines.

Back in April Swissport UK warned it would have to slash thousands of jobs if more government support for the aviation sector was not forthcoming.

This latest announcement demonstrates how the deep the damage to the aviation sector is.

The pandemic has hit aviation hard and airlines and airports have already announced plans to scrap tens of thousands of jobs.