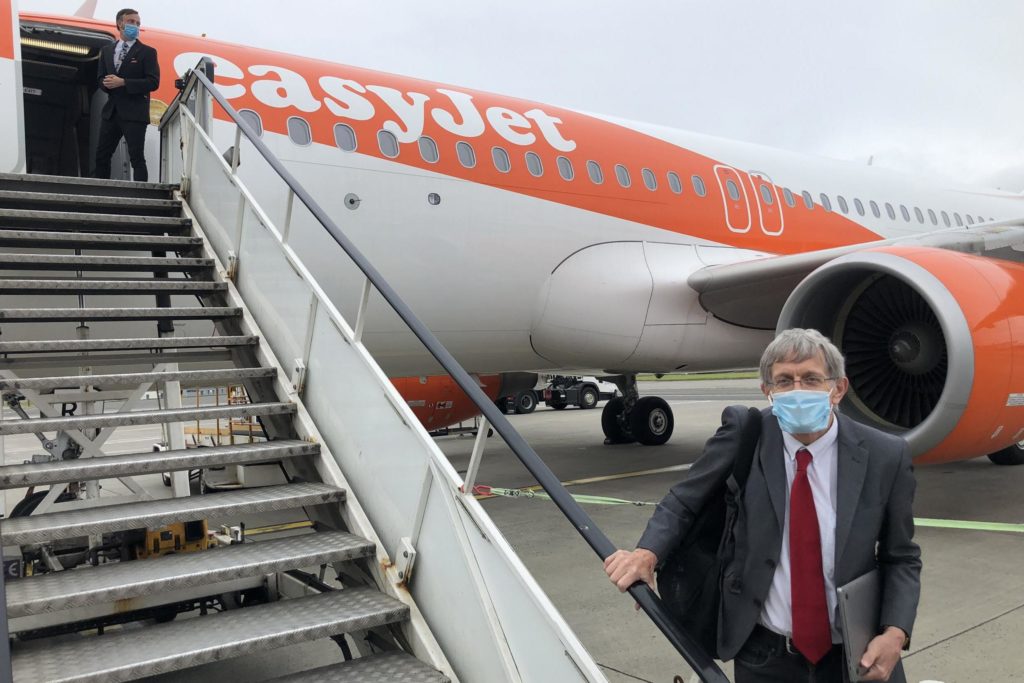 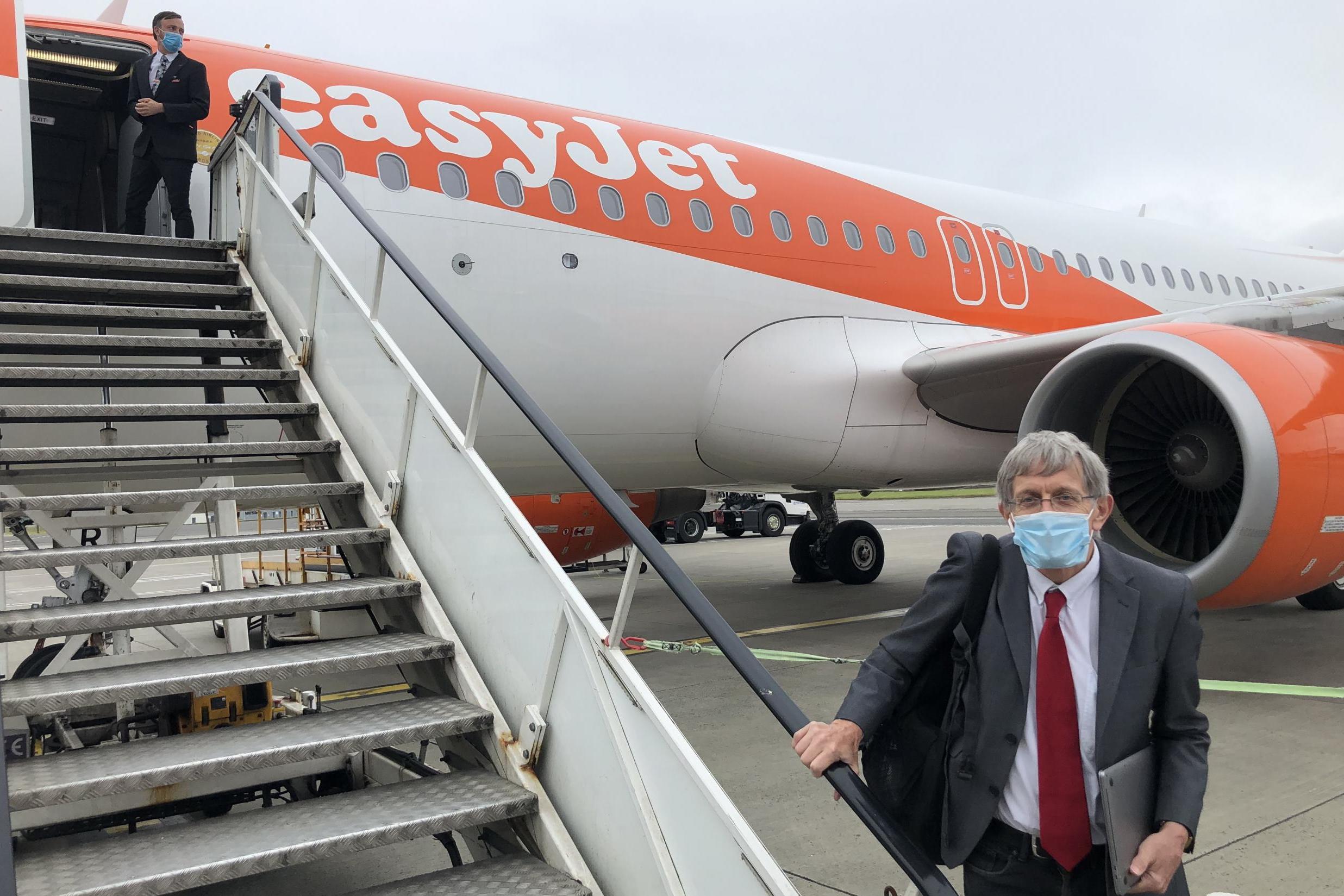 “It’s the start of the future,” said Tina Milton, one of the cabin crew aboard easyJet flight 883.

The Airbus A320 with 51 mask-wearing passengers on board was a few minutes into its flight from Gatwick to Glasgow, and had just flown over a near-moribund Heathrow.

The last easyJet flight before this one was a repatriation mission bringing holidaymakers home from Tenerife as the Covid-19 pandemic took hold; it landed at Gatwick on 29 March.

In the 11 weeks since then, the airline’s 344 planes have been grounded and staff furloughed – with easyJet burning through £5m a day.

Even though government rules in the four nations of the UK still ban all-but-essential travel, the Luton-based airline believes that it can start to earn some money after months in which it has been sending out refunds.

“I cannot tell you how much I’ve been looking forward to it.”

Almost all the passengers on board the 186-seat jet were off-duty easyJet cabin crew wanting to experience the “new normal” aboard Britain’s biggest budget airline.

Face masks must be worn at all time on board unless there is a loss of cabin pressure, and no more than two people can queue for the toilet at one time.

Ryanair is stricter: the Irish airline insists everyone remains seated unless a member of cabin crew gives permission to use the loo.

On post-lockdown easyJet, there is no inflight catering, though drinking water is available on board.

Fares on the few flights that are operating can be punishingly high: I paid £175 for the one-hour hop. Had I obeyed the recommendation to check in a bag, rather than take it on board, the price would have topped £200.

But for the rest of the week, the average fare is around £70.

Despite the prices, there are compensations while passengers are such a rarity. The security check at Gatwick took seconds, and with the world’s formerly busiest single-runway airport now one of the quietest, there were no queues to take off.

The next departure, one hour later, was to Belfast International, with a handful of people on board.

Welcoming the passengers on board, Captain David Morgan said: “This is a special day for easyJet today – the first day that we’ll be flying again since the lockdown commenced some 11 weeks ago.”

His boss, easyJet chief executive Johan Lundgren, said: “When people see that others are flying, that’s one of the best ways to increase confidence so we can get going again with the economy, and we can connect across Europe.”

Mr Lundgren has a busy day, as he is joining BA and Ryanair in legal action to try to overturn the UK government’s quarantine policy.

A week ago, the home secretary, Priti Patel, stipulated that almost all arrivals at UK airports, ferry ports and international rail terminals must self-isolate at home for two weeks.

“We hope that quarantine is going to be replaced by ‘air bridges’ or it will be restricted to countries where there is a real risk,” said Mr Lundgren.

Glasgow was the destination for the very first easyJet flight in 1995 – when the airline had just two borrowed Boeing 737s.

“We’re not expecting any delays getting into Glasgow,” reported Captain Morgan, with some understatement; the historic flight landed half an hour ahead of schedule.

The aircraft that are parked on the ground at the Scottish airport demonstrate the devastating effect of the coronavirus crisis on aviation.

Nineteen British Airways Airbus jets have been parked for months, along with a couple of Virgin Atlantic Airbus A330s. They comprise some of the overflow from Heathrow.

A handful of Flybe planes served to remind passengers of the last UK airline to fail; the regional airline collapsed as the Covid-19 pandemic took hold.

The Scottish airport has seen plenty of activity since lockdown began; it is the main base for Loganair, which connects the nation’s islands.

British Airways has also continued to operate very limited services to and from Heathrow, and Ryanair is running flights as a social service between various UK airports and its hub in Dublin.

But many travellers regard easyJet as the main holiday airline, and as summer takes hold across Europe the hope is that passengers will be lured back.

“It was absolutely fantastic to be back in the air again,” said Captain Morgan at the end of the flight.

“I’m cautiously optimistic. I think when people realise you can fly safely, hopefully they’ll get out and book some seats.”