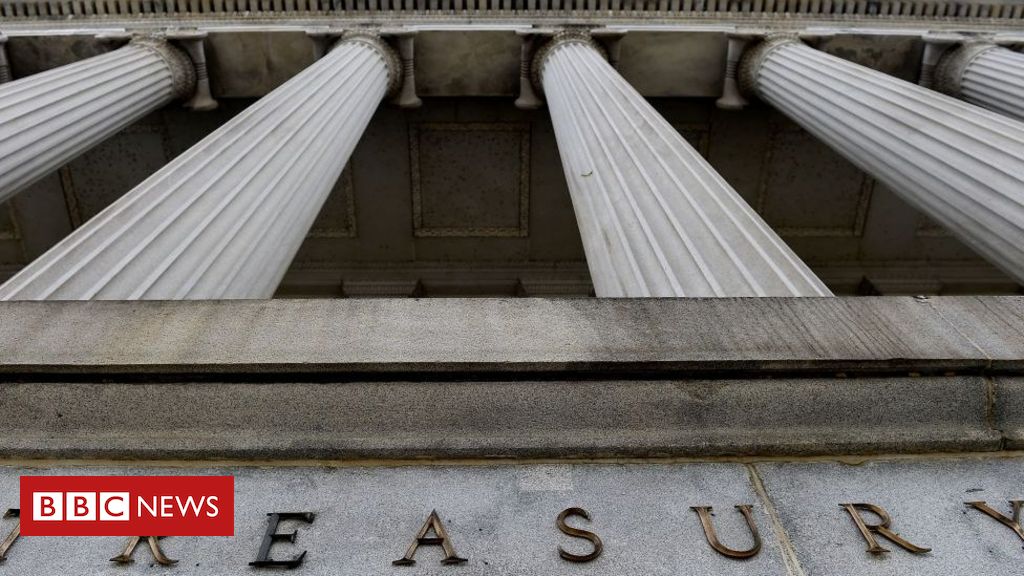 US Treasury sent $1.4bn of pandemic aid to dead people

US Treasury sent $1.4bn of pandemic aid to dead people


The US Treasury mistakenly sent more than $1.4bn (£1.1bn) of its pandemic rescue funds to dead people, government inspectors have found.

The finding was one of several “challenges” uncovered in the official review of federal coronavirus aid.

Since March, Congress has pumped some $2.6tn into the American economy in an effort to shield it from virus slowdown.

But the rush to deliver the money has contributed to errors, inspectors said.

For example, the Government Accountability Office (GAO) report found that the Treasury Department, which was in charge of mailing stimulus cheques to American families, did not check death records, even though some of the tax officials working on the programme said they raised concerns about the risk of erroneous mailings.

The report also warned that the Paycheck Protection Program for small businesses – a low-cost loan fund that accounts for 26% of US pandemic spending – was at “significant risk” of fraud, faulting the Small Business Administration for not cooperating with requests for information about the loans and its plans for oversight.

“Because of the number of loans approved, the speed with which they were processed, and the limited safeguards, there is a significant risk that some fraudulent or inflated applications were approved,” the inspectors said.

It said changes to respond to those risks were “essential”.

The report comes as lawmakers in Washington debate whether or not additional aid is necessary.

While Democrats and many economists – including the head of America’s central bank – have recommended further relief, pointing to high unemployment, many Republicans have been hesitant to approve more money.

“We should be very, very careful in evaluating what’s necessary before we go forward,” Republican Senator Pat Toomey said at a recent hearing.

White House officials have said additional stimulus is likely, but that it makes sense to see how the efforts so far are working. Critics say federal programmes have resisted oversight efforts, however.

Congresswoman Nydia Velázquez, a Democrat from New York, said the audit had revealed “mishandling and negligence” and “mismanagement of taxpayer funds”.

“If today’s report makes one thing clear, it is the need for transparency and accountability,” she said. “Administration officials must answer that call.”

How much has the US spent on coronavirus?

Congress has approved about $2.6tn in pandemic spending since March – a package estimated at about 14% of the country’s output.

The US has sent 160.4 million pandemic payments worth a total of $269bn so far, according to the report.

The single largest chunk of the rescue funding – about 26% – was for small business loans through the Paycheck Protection Program.

The US has distributed more than $500bn in loans to 4.6 million businesses so far.

Critics have said the distribution of those funds has been bungled by unclear rules and lack of oversight, claims supported by the GAO report.

“Consistent with the urgency of responding to serious and widespread health issues and economic disruptions, agencies have given priority to moving swiftly where possible to distribute funds and implement new programs,” it said.

“As trade-offs were made, however, agencies have made only limited progress so far in achieving transparency and accountability goals.”