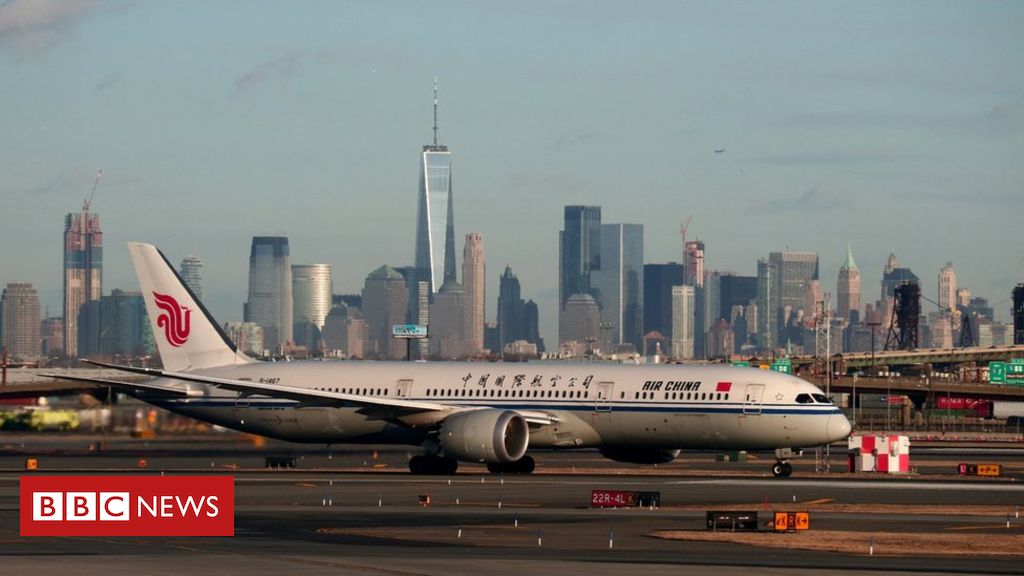 US to ban passenger flights from China

US to ban passenger flights from China


The US is to ban passenger flights from China from 16 June, in the latest sign of tensions between the two economic giants.

The Department of Transportation said it is punishing Beijing for refusing to let US airlines resume flights to China as its pandemic subsides.

In recent weeks the countries have sparred over coronavirus and China’s policies in Hong Kong.

But Washington said it would continue to “engage” on the air travel issue.

The Department of Transportation order applies to four airlines – Air China, China Eastern Airlines, China Southern Airlines and Hainan Airlines – which have continued to fly between the two countries during the pandemic, although at reduced levels.

It needs final approval from US President Donald Trump, who has repeatedly accused China of engaging in unfair trade, and in recent weeks criticised its handling of coronavirus and protests in Hong Kong.

The Chinese embassy in Washington did not immediately comment. Officials have previously said its restrictions, which were introduced to control coronavirus, were fair since they apply to all airlines.

Beijing in March said domestic and foreign airlines could operate no more than one weekly flight between China and any given country, adding that carriers could not exceed the level of service they were offering on 12 March.

The Department of Transportation said the March order had effectively banned US airlines, which had voluntarily suspended service between the two countries in February due to the pandemic and Mr Trump’s order barring entry to the US for most Chinese travellers.

It said the refusal to grant requests by US airlines to resume service this month violated the agreement governing air travel between the two countries, which dates back to 1980.

“We conclude that these circumstances require the Department’s action to restore a competitive balance and fair and equal opportunity among US and Chinese air carriers,” the Department of Transportation said.

“Our overriding goal is not the perpetuation of this situation but rather an improved environment.”

If the order goes forward, it will hurt travel, trade and other exchange between the two countries, said Daniel Kliman, director of the Asia-Pacific Security Program at the Center for a New American Security.

But that breakdown was already under way, he added.

“We’re already seeing de-coupling of the United States and China,” he said, pointing to US efforts to restrict technology sales and the US-China trade war. “It’s an acceleration of a trend that has really been building up.”

In recent weeks, China has moved to loosen restrictions on charter flights from some countries but not the US, according to a report last month in the Community Party’s Global Times.

Mr Kliman said there is some chance the two countries could resolve the matter before 16 June – but once the US ban goes into effect it will be hard to undo.

In January, there were about 325 round-trip flights weekly between the US and China. Those have numbered around 34 since the end of March, the US said.

Delta Airlines, one of the companies that had sought to resume flights this month, said it welcomed the US order.

“We support and appreciate the US government’s actions to enforce our rights and ensure fairness,” it said.