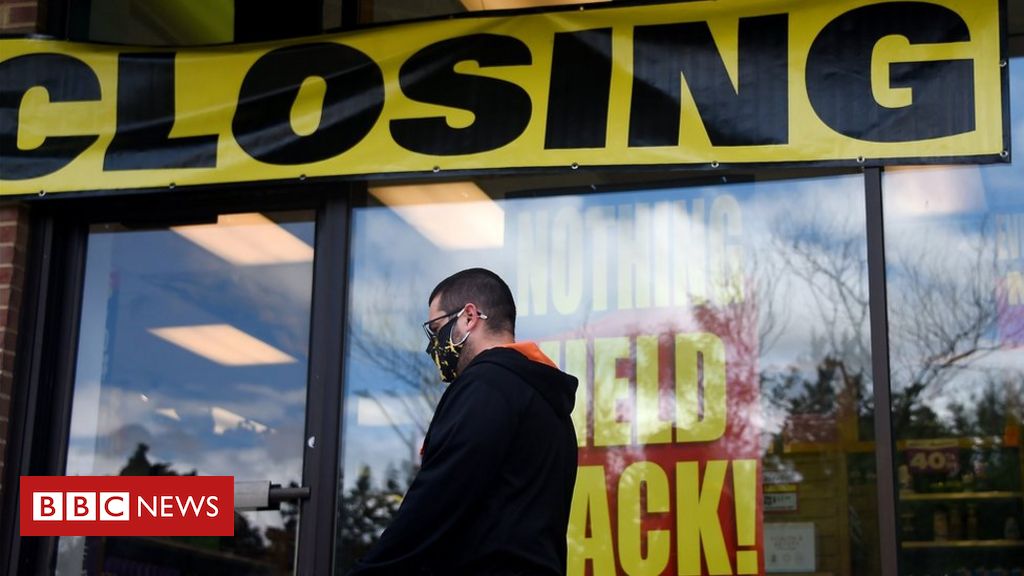 US jobless claims rise back above one million

US jobless claims rise back above one million

The US Labor Department said claims rose to 1.1 million, ahead of economists’ forecasts of 925,000.

The rise came as US President Donald Trump faces increased pressure over his handling of the health crisis.

Coronavirus infections continue to spread across the US, prompting local authorities to restrict businesses.

The number of people claiming jobless benefits had fallen in the prior two weeks. Most recently, it dipped below one million to 971,000 for the first time since March in the week to 8 August,

But economists have warned that the recent jobs improvement is at risk of stalling, as health concerns drive people to limit their activity and spending even as reopening continues.

“While hard-hit industries brought workers back in July, the level of weakness remains unprecedented, and the impact of virus-related rolling shutdowns could continue to reverse some of that improvement.”

The US economy suffered its sharpest economic contraction in more than 70 years of record keeping in the April-June period, shrinking at an annual rate of 33%.

Although the unemployment rate has fallen from the 14.7% high in April as businesses open and activity resumes, the 10.2% rate recorded in July remains higher than any month during the financial crisis.

Analysis: No time to pull back

By Michelle Fleury, US business correspondent

This data doesn’t feel like the V shaped recovery that President Trump and the Republicans are banking on.

With the number of Americans filing for unemployment back into seven digits after two weeks of declines, the jobs market is a reflection of the upheavals facing the world’s largest economy.

And yet at this key inflection point, Congress is still divided over the next relief package that might help many Americans who lost their jobs when the US shut down to halt the spread of the coronavirus.

Republicans want a smaller package. They point to improvements in the economy: the S&P 500 hit a record high this week, retail sales have rebounded and home building is strong.

Yet many people don’t feel better. Thousands of businesses are still closed. The unemployment rate is above 10%. And food insecurity is on the rise.

President Trump issued an executive order this month that provided $300 a week in additional unemployment benefits after a $600 a week payment approved by Congress expired in July. But the aid is limited and in some states is only expected to last three weeks.

With the recovery far from assured, most economists warn that now is not the time for the federal government to pull back.

More than 28 million people – nearly one fifth of the American workforce – were collecting some form of unemployment payment in the week ended 1 August.

“The number of individuals claiming benefits remains extraordinarily high – more than twice the peak of the Great Recession – underscoring that the labour market is a long way from being healthy,” said Nancy Vanden Houten, lead US economist at Oxford Economics.

Talks in Washington about further economic aid for people collapsed this month without a deal.

The lack of agreement meant that an extra $600 weekly top up that Congress approved for unemployment benefits during the pandemic expired at the end of July.

Analysts have warned that the removal is likely to further hurt the US economic recovery, which relies on consumer spending.

Democrats have called for more than $3tn in further spending – a figure Republicans have rejected as too high.

The stand-off puts Mr Trump, who is up for re-election in November, in a potentially perilous position.

Trump’s ignorance and incompetence have always endangered our country. COVID-19 was his biggest test—and he failed miserably. America has the most COVID-19 deaths in the world and an economic collapse—and both crises are falling hardest on Black and Brown families. #DemConvention

While polls suggest that voter approval of his handling of the economy remains relatively strong, Democrats are blaming him for the crisis.

“Trump’s ignorance and incompetence have always endangered our country. COVID-19 was his biggest test—and he failed miserably, “said Senator Elizabeth Warren on Twitter. “America has the most COVID-19 deaths in the world and an economic collapse—and both crises are falling hardest on Black and Brown families.”

But his orders do not fully replace the $600 bonus and have not been extended everywhere, since the programme would need support from local authorities.