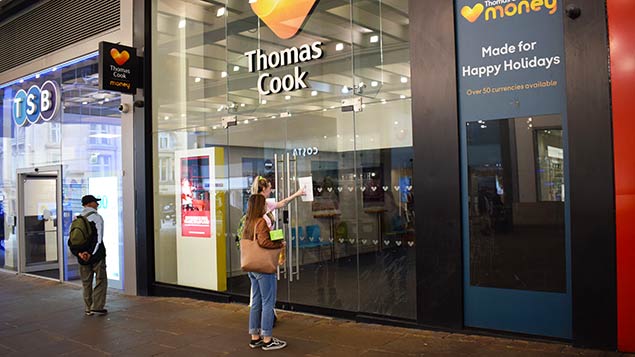 An employment tribunal has ruled that package holiday company Thomas Cook failed to consult before making redundancies when it went into administration in September 2019.

This could allow about 1,500 former Thomas Cook staff to claim up to £4,200 each from the government’s Insolvency Service.

The judgment was secured by the Transport Salaried Staffs’ Association (TSSA) travel trade union, which took action after the travel giant went into liquidation making office workers redundant in London, Manchester and Peterborough without prior warning or consultation.

The workers were in roles such as retail support, central operations, call centres, HR, property, customer insight and financial services.

Employees who worked at Thomas Cook retail stores were not included in the judgment but are being addressed separately in a continuing employment tribunal case. The British Airline Pilots Association (Balpa) won a similar case earlier this month.

Unlike the airline and head office situations, the retail workers’ cases are thought to be complicated by the fact that many of the premises had fewer than 20 people working in them. Companies are only obliged to enter into a consultation process over locations where more than 20 people are working.

TSSA successfully argued that Thomas Cook should have started a consultation process at least 45 days before making anyone redundant but it failed to do so.

Those covered by the judgment can seek up to eight weeks’ pay from the Insolvency Service, which guarantees some of the protective award compensation from the national insurance fund.

The awards will be capped at £525 a week by the Insolvency Service – the 2019 rate – which means that a former Thomas Cook employee could claim up to £4,200 with payment expected within the coming weeks.

TSSA general secretary Manuel Cortes said: “I’m delighted for our members and all those who were failed by both Thomas Cook and the government.

“Our members endured harsh treatment from the start, not only through the actions of the company, but at the hands of a government which failed to step in to save this cornerstone of our high streets when it made perfect sense to do so.”

Daniel Kindell, partner at Morrish Solicitors, which assisted TSSA with the case, said: “Unfortunately, time and again I see consultation obligations flouted in cases of insolvency, leaving staff unemployed at the drop of a hat.

“Such an approach should not go unchallenged. I hope the tribunal’s decision gives ex-employees of Thomas Cook some sense of justice.”

Thomas Cook was reincarnated as an online travel agent in September 2020 under the ownership of the Fosun Tourism Group, a Chinese travel firm, that was in talks to buy Thomas Cook before it went into administration. Fosun opted out of a deal to buy the company but chose to buy the brand name for £11m.