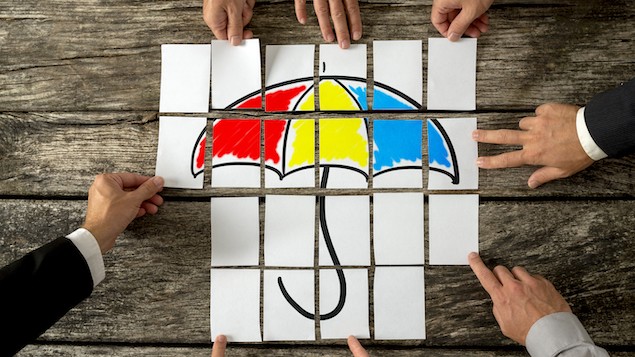 Lawyers are pursuing group legal action against umbrella companies that have unlawfully deducted national insurance and other contributions from contractors’ gross pay.

Umbrella Reclaim, a trading name of law firm McFaddens, is seeking to build a base of individuals, who feel umbrella companies made incorrect deductions from their pay, to take a series of group actions and potentially win their clients compensation.

Self-employed contractors often use umbrella companies as an alternative to setting up and working through their own limited company – effectively becoming their employee.

The umbrella acts as an intermediary between the contractor and a recruitment agency or end client, with the umbrella calculating and deducting NI and PAYE.

Thanks to changes to off-payroll rules (IR35) in the public sector in 2017, which were also due to be enforced from April 2020 in the private sector but were postponed, employers now take on liability for ensuring contractors pay the right level of tax and national insurance.

This has made many organisations wary of using limited company contractors, and recruiters have increasingly been encouraging contractors to work through umbrellas as a result.

Umbrella Reclaim believes that a number of unscrupulous umbrella companies have been unlawfully deducting employer’s national insurance contributions (NICs) from the contractors’ agreed fees. By not including this in an uplift in their gross income, the NICs are being deducted from the contractors’ flat rate, leaving them worse off.

“The question may be where the deduction is made,” he says. “If it’s done at the point in the chain between the umbrella and the employee, it’s unlawful and could be a case for tribunal. If it’s applied between the agency and umbrella company, that’s unethical but not against the law. Strictly speaking, the employer’s NICs should be paid by the client.”

Umbrella Reclaim also suggests that some umbrella companies with a turnover of more than £3 million are deducting apprenticeship levy payments – with contractors unlikely to ever see any training benefit from those monies.

Susan Neal, sales and marketing manager at Umbrella Reclaim, said: “Unions have taken up this issue before but it has been swept aside. If an individual tried to take their case to tribunal it would be very expensive and they could be pursuing money from several umbrella companies over different contracts. Group claims reduce that risk.

“Some of these companies are technically huge employers with thousands of contractors on their books. Once this starts there will be a domino effect.”

One of the problems is that candidates often don’t want to be seen as a troublemaker, biting the hand that feeds them.” – Martyn Valentine, The Law Place

Since April this year, recruitment agencies have been required to give those on their books a key information document (KID) as part of reforms to the Conduct of Employment Agencies and Employment Businesses Regulations 2003. This should show the PAYE rate to the contractor and the umbrella rate.

Umbrella Reclaim argues that this is not happening with many agencies, and some are flouting the conduct regulations further by forcing contractors to sign up with preferred umbrella suppliers.

“We see candidates pushed to umbrellas on preferred supplier lists as a condition of work, which again is a breach of the conduct regulations,” adds Valentine. “Yet one of the problems is that candidates often don’t want to be seen as a troublemaker, biting the hand that feeds them. Or umbrellas companies may be happy to settle out of court.”

A relevant legal judgment in this area was Weldon vs 6Cats in 2019, where Weldon successfully claimed back unauthorised NI and apprenticeship levy deductions of £864.01 and £40.11 respectively from an umbrella company.

Umbrella Reclaim says it has been approached by a number of contractors from a financial services company who were not given an uplift in their day rate despite being asked to enrol with a particular umbrella company.

Contractors who feel they might have a claim are asked to pay £99 registration fee towards the costs of litigation – if there is no case to answer this is refunded and if a claim is successful the client is also refunded in full. Umbrella Reclaim will also take a 25% “success fee” of any compensation won.

Dave Chaplin, founder and CEO of ContractorCalculator, argues that most umbrella companies are compliant and transparent with the rates they advertise, but if employers are concerned about a potential uplift in rates for the contractors they engage, they should audit their relationships with agencies and the umbrella companies engaged by those agencies.

“The client or agency needs to pay employer’s NICs on top of the rate as it’s employment income,” he says. “They don’t want to say to the client we need to pay the contractor a higher rate, so who picks up that bill?

“Some firms will take the hit on rates for a zero risk approach. Those reliant on contractors will need to profile the whole workforce, who are deemed employees, what the flight risk is if someone is put on payroll. Then they can decide whether to put them through an assessment regime [to deem whether they are inside or outside IR35] or put them on the payroll.”

Final changes to the off-payroll legislation before it comes into force for private-sector employers next year could spell trouble for umbrella companies anyway, adds Chaplin. Changes to the Income Tax 2003 Act through the Finance Act 2020, which will activate the IR35 reforms, will broaden the definition of an intermediary to include any company that makes a “chain payment” to a worker. This means that an agency or end-client will process the tax and NIC deductions, effectively rendering the umbrella company redundant.

Chaplin said: “These changes are potentially disrupting for umbrellas and the agencies that rely upon them. Many agencies legitimately use umbrella companies to avoid operating their own payroll and may now need to bring their payroll in house.”

However, he believes the change may reflect an inadvertent error in drafting that will need to be changed before the law comes into force next year.

“There has been historic controversy surrounding tax avoidance schemes operating under the guise of umbrella companies, but the industry has worked hard to self-regulate and try to prevent these firms from operating.”