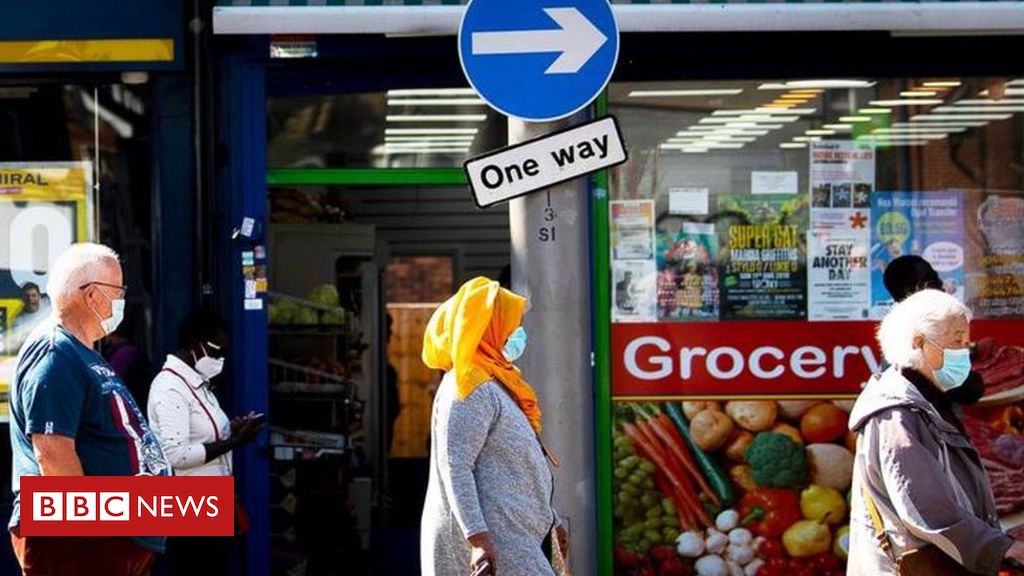 UK economy shrinks record 20.4% in April due to lockdown

UK economy shrinks record 20.4% in April due to lockdown


The UK’s economy shrank by 20.4% in April – the largest monthly contraction on record – as the country spent its first full month in lockdown.

The Office for National Statistics (ONS) said the “historic” fall affected virtually all areas of activity.

The contraction is three times greater than the decline seen during the whole of the 2008 to 2009 economic downturn.

But analysts said April was likely to be the worst month, as the government began easing the lockdown in May.

The ONS also published figures for the three months from February to April, which showed a decline of 10.4% compared with the previous three-month period.

News of the slump comes as almost nine million UK workers are having their wages paid by the government, while the number of people claiming unemployment benefit rocketed by 856,500 to 2.1 million in April.

In normal times, a country’s Gross Domestic Product (GDP) – the value of the goods and services it produces – increases, making its citizens on average slightly richer. However, the ONS said April’s fall in GDP was the biggest the UK had ever seen.

“In April, the economy was around 25% smaller than in February.”

He said virtually all areas of the economy had been hit, with pubs, education, health and car sales making large contributions to the decline.

“Our own surveys and wider indicators have suggested a pick-up in economy activity, but I think it’s really too early to know how quickly economic activity will recover in the coming months.”

So the economy has shrunk 25%. How come the other 75% is still standing?

In large part, thanks to the extraordinary levels of state intervention propping it up.

More than one in four UK workers – some 8.9 million – are now on the government’s furlough scheme that allows them to receive 80% of their monthly salary up to £2,500.

The scheme has cost £19.6bn so far, while a similar programme for self-employed workers has seen 2.6 million claims made worth £7.5bn.

Without these schemes, household consumption, which makes up nearly two-thirds of the UK’s GDP, would have fallen even further.

What does the government say about it?

Chancellor Rishi Sunak said: “In line with many other economies around the world, coronavirus is having a severe impact on our economy.

“The lifelines we’ve provided with our furlough scheme, grants, loans and tax cuts have protected thousands of businesses and millions of jobs – giving us the best chance of recovering quickly as the economy reopens.”

The chancellor said life would get “a little bit more back to normal” once High Street shops could reopen.

That is set to happen on Monday in England, while shops in Northern Ireland have already been allowed to resume trading. Scotland and Wales have their own timetables for easing restrictions.

In response, shadow chancellor Anneliese Dodds warned that the UK’s economy was shrinking faster than those of other countries.

She said the UK would need “strong action to help us climb out of this as quickly as possible”.

The ONS numbers add to the pressure to ease the lockdown more quickly, but fears around the control of the disease have led to a step-by-step cautious approach.

There is some pressure on the Treasury to consider similar economic rescue packages to those made across Europe.

Germany, for example, has cut VAT and offered billions in a package to help families with children and purchasers of green cars. France is offering huge rescue funds to the car and aerospace industry.

The unprecedented jobs schemes here will help to protect livelihoods. But with this scale of hit, it will not be enough.

Sophie Lawler’s 17 health clubs remain closed to their 100,000 members in the north of England and Wales. And like the rest of the fitness sector, she has no idea when she might get the green light to reopen.

“The whole sector has struggled financially, and may do so for years to come,” she said. “The industry is shouldering quite some rental burden, costs we still incur even while we’re closed.”

Furloughing has been vital, she says, but she’d like the government to do more – perhaps in the form of VAT exemptions or more support for leaseholders.

Despite the uncertainties, however, she thinks the sector will weather the storm. “It terms of demand, we will do pretty well when we get through to the other side of this.”

How does this slump compare historically?

April’s unprecedented contraction is three times that – although it is only a figure for one month.

The UK’s economy was already shrinking even before April.

It contracted by 2% in the first three months of 2020, as just a few days of impact from the virus pushed it into decline.

Economists expect an even bigger slump in the April-to-June period, plunging the country into a deep recession.

So where do we go from here?

“Given the lockdown started to be eased in May, April will mark the trough in GDP. So we are past the worst,” said Andrew Wishart, UK economist at Capital Economics.

“But the recovery will be a drawn-out affair, as restrictions are only lifted gradually and businesses and consumers continue to exercise caution.”

Tej Parikh, chief economist at the Institute of Directors, said coronavirus had caused “unparalleled” economic turmoil which was “likely to scar the UK economy for some time yet”.

“Having provided businesses life support, the government must now figure out how to stimulate activity,” he added.

“Waiting until later in the year to act will risk more businesses and jobs will be lost.”

How does the UK economy compare with other countries?

We don’t really know yet. The UK is one of the few countries to publish monthly economic data – most others just produce quarterly and annual figures.

We do know, however, that coronavirus has already pushed several major economies into recession:

On Wednesday, the Organisation for Economic Co-operation and Development warned that the UK could be the hardest hit by Covid-19 among major economies.

The British economy is likely to shrink by 11.5% in 2020, slightly outstripping falls in countries such as Germany, France, Spain and Italy, it said.

What is a recession?

A recession is usually defined as when this happens for two three-month periods – or quarters – in a row.

Technically, we are not at that point yet. But the UK, along with much of the rest of the world, is thought to be heading into the worst recession for decades.