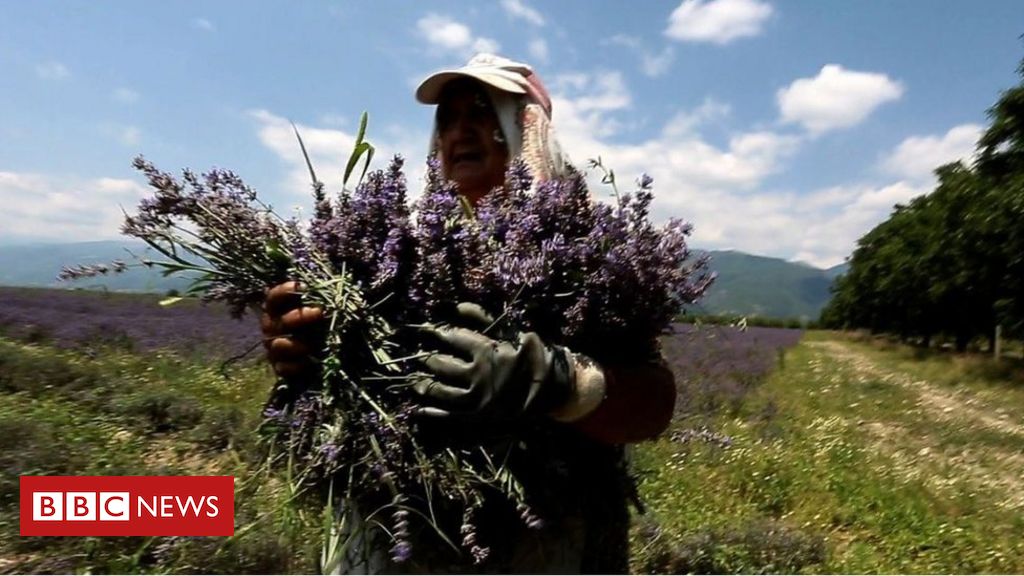 The sweet smell of success: How Bulgaria took the lead in lavender

The sweet smell of success: How Bulgaria took the lead in lavender


If you think of lavender, the picturesque purple fields of Provence, France might spring to mind.

A favourite scent of the Romans, it’s used for cosmetics, fragrances, and even – with the help of bees – to make honey.

However, in recent years, Bulgaria, the former communist country in Eastern Europe, has overtaken France to become the world leader in lavender oil production.

In the heart of Bulgaria’s Rose Valley, in the foothills of the Balkans mountain range, the fields around the small village of Tarnicheni turn purple every late spring.

Meanwhile, French lavender production has suffered big losses in the past decade, due to a bacterial infection.

“Somebody needed to fill the gap,” says Filip Lissicharov, the owner of the Enio Bonchev essential oil distillery in Tarnicheni. He took over in 1992, following the fall of communism and state ownership, but the business was set up by his family in 1909.

With this year’s crop of flowers now continuing to be harvested, Bulgaria’s tradition of lavender cultivation dates back to the beginning of the 20th Century.

“Bulgaria and France have changed places before, with Bulgaria being the largest producer of lavender back in the 70s/80s,” says Nikolay Valkanov, chief executive at InteliAgro, a Bulgarian non-profit research group in the agriculture field.

Bulgaria snatched the crown back from France in 2012, and its lavender plantations have expanded to cover 180sq km (69sq miles) from less than a fifth of that a decade ago, according to InteliAgro,

Cheap labour, a good climate and a long tradition of growing lavender are Bulgaria’s main advantages, says Krisztof Glowacki, economist at the Center for Social and Economic Research (Case), a think tank in Central and Eastern Europe.

Mr Glowacki says this helps to make Bulgarian lavender oil less than half the price of its French equivalent. So as French production has fallen, he says that the cheaper cost of Bulgarian oil has been attractive to buyers such as large cosmetics companies.

In Tarnicheni, Mr Lissicharov’s firm is now distilling this year’s flowers to produce the lavender oil. The flowers are steamed, and this moisture is collected and concentrated to form the oil.

Almost all of the oil will then be exported, as will the lavender water that the company also makes. The latter is produced by adding flowers to water, and bringing it to the boil.

“Regretfully 99% of our lavender production goes for export. Bulgaria still does not have a well-developed cosmetics industry which uses this particular essential oil as a main raw material,” says Mr Lissicharov.

The US is the world’s largest consumer of lavender oil, but the main buyers of Bulgaria’s exports are Germany, France and Austria, according to the Bulgarian National Association of Essential Oils, Perfumery and Cosmetics.

Lavender needs full sun and well-drained soil to grow well. The plant originated from Mediterranean countries, so it requires temperatures of 20-30C during late spring and early summer to thrive.

Some varieties can, however, be successfully grown in countries like the UK. And it was recently reported that sales of English lavender oil have risen sharply this year.

Although labour costs do play a part in the price of lavender oil, ultimately it comes down to its quality. And many say that French oil remains the best.

Alain Aubanel, president of the Interprofessional Committee of French Essential Oils and owner of Distillerie des 4 Valees (Distillery of the Four Valleys), says that while production in France has been increasing in recent years, his focus is on quality.

“It is true that in terms of prices, we can’t compete,” he says. “Nevertheless, in terms of quality, know-how, traceability, and the varieties adapted to the soil, there we really have an important card to play.

“It’s like for the wine. The varieties we use in France are not the same as the ones used in Bulgaria. It’s not the same climate, and the production process is also totally different.”

That is important to some buyers.

“On odour, the French oil is considered to have a floral, fruity, camphoraceous odour with an aromatic liquorice type top note,” says Tracey Smith, global analytical sciences manager at Treatt, a fragrance and flavourings firm in the UK.

“The Bulgarian oil can sometimes be described as floral and fruity, but less fresh with a slightly harsh grassy top note. The highest grade AOP French fine lavender must be grown a minimum of 800m above sea level.”

Ms Smith adds that her firm buys much more Bulgarian lavender than French because of the price.

“If you are going to create a fine fragrance, then you would want the best lavender. If you are creating a fragrance for a hand wash, then Bulgarian lavender is fine, And it is much, much cheaper.”

The future may be away from just smelling nice, however.

“The demand for lavender products may depend on interest in complementary medicine, and aromatherapy,” says Mr Glowacki, the think tank economist.

Nevertheless, he thinks that the trend of increasing salaries in Bulgaria will gradually make lavender cultivation there less profitable. And in the longer term, he sees climate change as a risk, since lavender is a sensitive crop.

“However,” he says, “the social significance of the sector is much higher [than longer term climate concerns], as it offers an opportunity in less developed regions to gain income.”