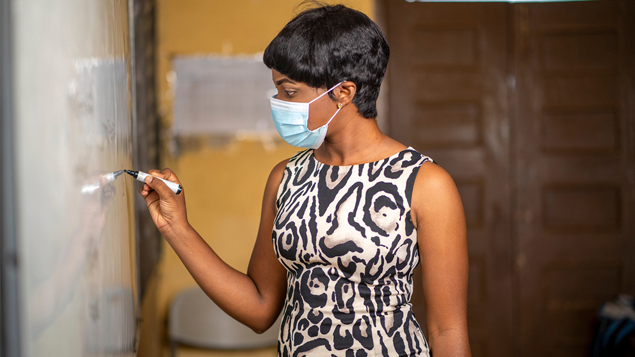 Teachers are being asked to disable the NHS Covid-19 contact-tracing app while at school in order to reduce the number of staff required to self-isolate, according to a union.

The NASUWT claimed that headteachers and local councils’ public health teams were telling staff to either switch off their phone, disable the app or disregard any notifications to self-isolate they received.

Under current government guidance, school staff can pause the contact-tracing part of the app when their phone is in a locker, when they are fully protected behind a protective screen, or are wearing medical-grade PPE.

The alleged instructions have come after numerous reports of shortages of staff and schools forced to close following Covid-19 outbreaks in classrooms.

NASUWT general secretary Dr Patrick Roach said: “The government rightly states that the NHS Test and Trace app is a key part of the UK’s Covid-19 response. Instructions for the use of the app clearly state it should switched on at all times in schools unless the phone is in a locker.

“It beggars belief that some schools are disregarding such clear instructions and it is deeply worrying that local public health teams appear to be giving similar advice.”

Roach said it was “even more concerning” that teachers were being instructed to disregard app notifications to self-isolate, which he said was putting lives at risk and could potentially lead to much larger outbreaks.

“This would lead to far more pupils and teachers self-isolating than would be required if the app was followed,” he said.

“The government’s test and trace system is already beset with problems, and ministers must act swiftly and with clarity to ensure that schools are following the correct guidance at all times and teachers have the app switched on in schools.”

It has previously been reported by the BBC that teachers in Aberdeen were told to switch off the app, while the Guardian reported that public health officials in Wirral were recommending that the contract-tracing function of the app was turned off while on school premises.

Wirral Council has said schools in the area have a “very effective” local process for contact-tracing when a Covid-19 case is identified and that headteachers should tell staff to turn the app back on when they leave school premises.

The Department for Health and Social Care said in a statement: “The NHS Covid-19 app is a key tool in our pandemic response, working to break the chain of transmission as quickly as possible to stop the spread of the virus and protect our loved ones. It’s crucial that people self-isolate when instructed to do so by the app.

“The more people who download it, the better it works and we encourage people to keep the contact tracing functionality switched on for as much of the time as possible.”

Office for National Statistics data published last week showed that the coronavirus infection rate was the highest among secondary school-age pupils than any other age group, despite falling slightly after the half-term holiday.

In response, the National Education Union’s joint general secretary Dr Mary Bousted called on the government to do more to reduce Covid-19 transmission in schools.

She said: “The situation is untenable and widespread disruption will continue unless the government takes steps to get coronavirus under control in schools.

“Schools have gone to great lengths to make themselves as safe as possible but there is only so much they can do on their own. We put forward a ten-point plan in June with suggestions including hiring additional space and teachers to reduce class sizes.

“More recently we have put forward ideas to enable social distancing in schools through the use of rotas for older secondary school pupils.All these suggestions were ignored.

“Schools have been given inadequate advice – more often than not delivered at the last minute – and with no additional funding.”