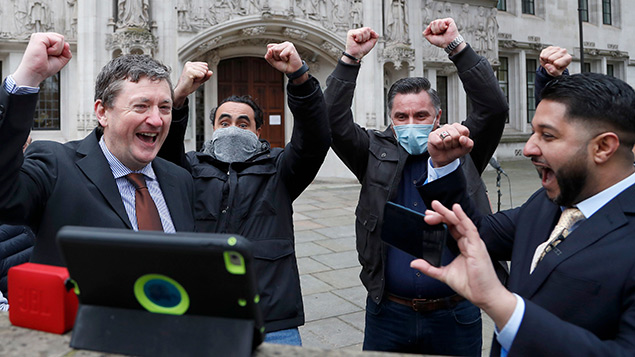 The Supreme Court has unanimously ruled that Uber drivers are workers – a landmark judgment that will have a significant implications for the gig-economy and ends a long-running legal case.

Summarising the judgment this morning, Lord Leggatt dismissed Uber’s appeal against the decisions of the employment tribunal, employment appeal tribunal and the Court of Appeal in the Uber BV and Others v Aslam and Others case.

It means that Uber drivers are considered “workers” – not self-employed as Uber had argued – and are therefore entitled to basic rights including paid holiday, rest breaks and the national minimum wage.

There were five reasons why the Supreme Court came to its decision:

Lord Leggatt said the relationship between Uber and drivers is one of “subordination and dependency” and noted that drivers have little ability to increase their professional skills, and can only boost their earnings by carrying out more work for Uber.

The case began with two drivers – James Farrar and Yaseen Aslam – in 2016, who brought the case before the employment tribunal as they believed that they should be considered workers rather than self-employed.

The drivers contended that, during the periods covered by their claims, they were workers for the purposes of the Employment Rights Act 1996, the National Minimum Wage Act 1998 and the Working Time Regulations 1998. They argued that this entitles them to the minimum wage, paid leave and other legal protections.

Uber argued that the drivers are independent, third-party contractors and not workers.

Following a preliminary hearing, the employment tribunal – in a case brought by the GMB union and law firm Leigh Day – found that the drivers were workers and that they were working whenever they: had the Uber app switched on; were within the territory in which they were authorised to work; and were able and willing to accept assignments. These findings were subsequently upheld by the Employment Appeal Tribunal and the Court of Appeal. Uber then appealed to the Supreme Court.

Lord Leggatt said today the courts were right to find that Uber drivers are workers and upheld the employment tribunal’s finding that their working time is not limited to the time spent driving passengers to their destinations. Rather, they are considered workers during the time they spend logged in to the Uber app.

Yaseen Aslam, lead claimant, said: “I am overjoyed and greatly relieved by this decision which will bring relief to so many workers in the gig economy who so desperately need it. During the six years of these proceedings, we have watched the government commission and then shelve a review of the gig economy yet do nothing to help us. I hope in future the government will choose to carry out its duty to enforce the law and protect the most vulnerable from exploitation.”

Mick Rix, GMB national officer, said: “Uber must now stop wasting time and money pursuing lost legal causes and do what’s right by the drivers who prop up its empire. GMB will now consult with our Uber driver members over their forthcoming compensation claim.”

Anne Pritam, employment lawyer at Stephenson Harwood, said the judgment “opens the floodgates” and organisations in the gig economy should expect a “torrent of claims” from individuals who want the rights afforded to those with worker status.

The judgment has made it clear that it is not open to gig employers to pick and choose its rules – if the law mandates that these individuals should be paid national minimum wage then there is no contract that can escape that” – Rachel Mathieson, Bates Wells

“Today’s decision changes the landscape for businesses operating in the gig economy. They face two choices: accept the burden of the extra costs associated with engaging workers, or rethink their fundamental structure, if they want their people to continue to maintain true self-employed status. Neither will be appealing, at a time when their balance sheets have been hit hard by the pandemic,” she said.

Paul Jennings, a partner at Bates Wells – the law firm representing the drivers who brought the case against Uber – said: “The Supreme Court’s judgment is a clear and powerful restatement of the importance of basic employment protections. It will shape all future cases concerning the gig economy.

“The ruling strikes at the heart of Uber’s business model. We anticipate there will be a significant class action against Uber. As a business, it will need to reflect very carefully on the implications of the judgment.”

Bates Wells senior associate Rachel Mathieson said: “The judgment has made it clear that it is not open to gig employers to pick and choose its rules – if the law mandates that these individuals should be paid national minimum wage then there is no contract that can escape that.

“Today’s judgment is a crucial milestone in the protection of individuals in our modern economy. The Supreme Court has confirmed that laws including the National Minimum Wage Act are there to protect vulnerable workers from being paid too little for the work they do, being required to work excessive hours or being subjected to other forms of unfair treatment.”

The GMB union said it would consult with Uber driver members over a forthcoming compensation claim at the Employment Appeal Tribunal. Law firm Leigh Day, which is representing the drivers on behalf of GMB, said tens of thousands of drivers could be entitled to an average of £12,000 each in compensation.

Nigel Mackay, a partner in the employment team at Leigh Day, said: “Our clients have been fighting for worker’s rights for many years, so we are delighted that the end is finally in sight.

Uber has consistently suggested that the rulings only affect two drivers, but Leigh Day will be claiming compensation on behalf of the thousands of drivers who have joined its claim” – Nigel MacKay, Leigh Day

“Uber has consistently suggested that the rulings only affect two drivers, but Leigh Day will be claiming compensation on behalf of the thousands of drivers who have joined its claim.”

“This will need to be addressed and potentially retrospectively,” he said. “This will be a massive administrative headache as drivers’ hours are not static and determined by how much they work and likewise earnings will fluctuate.

“This late adoption by Uber will also require the highest level of contributions to be paid across, 5% of banded earnings, which may well result in more than normal opt-outs which could still leave their employees without pension provision in later life. This could also have repercussions for other similarly employed people.”

Dave Chaplin, CEO of contractor advice services ContractorCalculator and IR35 Shield, said the judgment should also remind contractors to check the agreements they have with organisations.

“The take away for the contracting community and IR35/off-payroll matters is the reinforcement of what we know already – make sure the contractual paperwork is correct and a true reflection of the engagement. Then there should be no issues,” said Chaplin.

In March 2020, judges in France ruled that Uber drivers were employees. But in the US, in California, initial rulings in favour of worker status for Uber and Lyft drivers were overturned in a state-wide referendum. Uber has also been involved in a complex case in Germany where it has to work with licensed private hire vehicle companies after being banned in 2015.

Uber has not responded to a request for comment on today’s Supreme Court ruling.