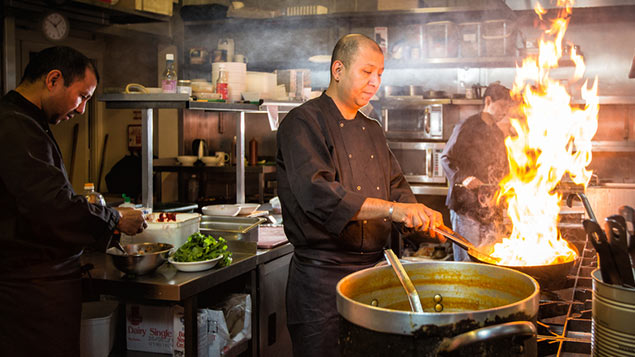 The MAC has recommended that chefs are removed from the shortage occupation list. Image: Photopia / Shutterstock

Last week, the Migration Advisory Committee (MAC) released a report outlining what occupations should be recognised as being in shortage for the purposes of sponsorship under the new Skilled Worker category of the new points-based immigration system. Andrew Osborne scrutinises the detail.

Points-based immigration is due to launch on 1 January 2021. Once the Home Office responds to the MAC’s report on shortage occupations, hopefully new immigration rules and guidance for employers will swiftly follow, allowing stakeholders to get to grips with the detail of the Skilled Worker route in time for go-live.

The main purpose of the shortage occupation lists will be different under the new immigration system. Instead of enabling employers to hire people faster, it will allow to them to be paid less.

Lower rates apply for occupations covered by a national pay scale and to individual migrants who have a PhD that is relevant to their role or who fall within the definition of being a ‘new entrant’ to the labour market.

Rather than skilled immigration pushing up the salaries of local workers at the higher income range, salary growth in shortage roles may be suppressed temporarily in recognition that changes to industry practices and societal values will take more time to affect remuneration than the country can currently afford.

Certainly, employers outside England will find it more affordable to sponsor individuals in shortage occupations under Skilled Worker than under the present Tier 2 (General). Time will tell however whether this measure will encourage employers to use the Skilled Worker route to fill skill gaps or if, due to the overall cost of sponsorship, some vacancies will go unfilled, be eliminated through business restructuring or be given to candidates who are able to work from abroad.

Contrary to what was indicated when the MAC published their call for evidence on this work, very sensibly they have extensively considered the labour market shock caused by the Covid-19 pandemic. In the wake of a severe downturn in trade across most industry sectors, there are only two job titles that have been “upgraded” to become eligible for sponsorship under the Skilled Worker route – “vent chick sexers” (specialists who identify the gender of poultry) and deckhands on large fishing vessels of 9 metres or more.

This is a significant expansion from the scope of the current lists, which cover around 9% of total employment. The bigger pool of recognised shortage occupations reflects that a much broader range of occupations will be eligible for sponsorship than under Tier 2 (General), which only encompasses occupations at RQF Level 6 or above. New proposed occupations include butchers, bricklayers and welders.

In addition to the separate shortage occupation list for Scotland, to which the MAC recommends adding chemical engineers in the nuclear industry, childminders and nursery nurses, specific shortage occupation lists for Wales (including health professionals) and Northern Ireland (including housing officers, fishmongers/poultry dressers, bakers and horticultural workers) have been recommended for the first time.

Social care in, chefs out

The MAC acknowledges that the end of free movement for EEA/Swiss nationals and their family members will place significant pressure on the social care sector if increased funding for higher wages is not forthcoming. It has therefore recommended recognising senior care workers, nursing assistants and a range of other health occupations as being in shortage. Unfortunately, this means the return of potential compliance pitfalls for employers where the Home Office does not consider a particular migrant’s duties and responsibilities meet the definition of being a “senior” carer.

The proposed removal of chefs from the shortage occupation list is not surprising given the extent to which the hospitality sector has been hit by the pandemic. As this occupation is at RQF level 3, it will be eligible for sponsorship under the Skilled Worker route, however employers will have to ensure that any chefs they sponsor are paid at least £25,600, which represents a wage level at the 70th percentile for this occupation. The MAC will review the position in their 2021 report. Once the economy has recovered from the effects of the pandemic, it is likely that stakeholders will argue strongly for chefs to be added back to onto the list as it will in many cases be uneconomical to sponsor them otherwise.

It is encouraging that the MAC would like to complete a minor shortage occupation review on an annual basis and a major review every three years once the economy is no longer affected by the pandemic. At a minor review, new occupations could be added, but none removed. Occupations at risk of removal would however be flagged. At a major review, all inclusions to the lists would need to be assessed from scratch. If accepted by the Home Office, this will make the shortage occupation list more responsive to changes in market conditions that lead occupations to be in shortage, while giving employers fair warning of occupations at risk of removal.