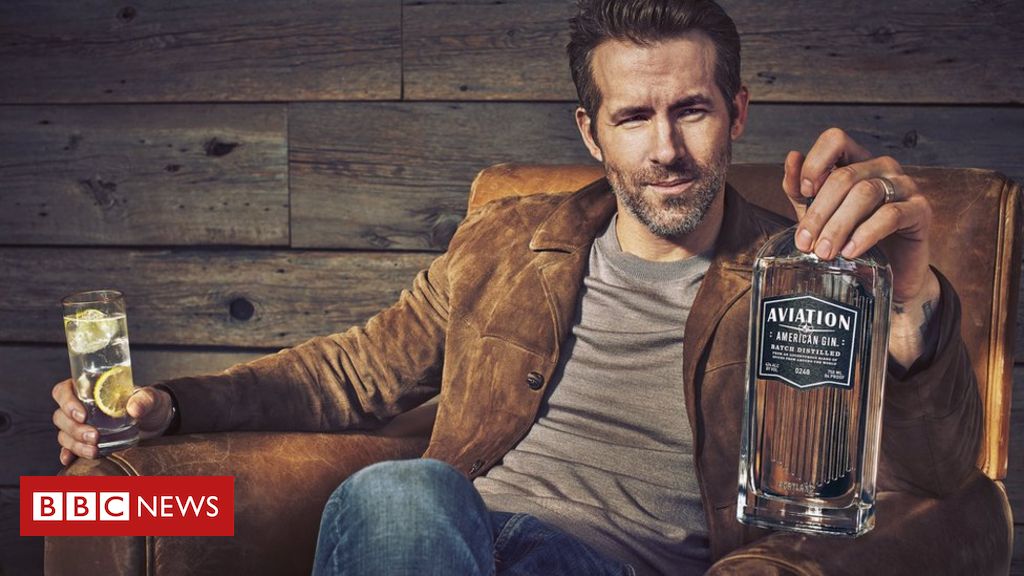 
Hollywood actor Ryan Reynolds has become the latest celebrity to cash in on the popularity of premium spirits.

Drinks giant Diageo has bought the gin brand he co-owns, Aviation American, along with three other spirits as part of a $610m (£460m) deal.

Mr Reynolds, who starred in the Deadpool films, has agreed to remain the face of Aviation for the next 10 years as part of the agreement.

He follows George Clooney and David Beckham in striking deals with Diageo.

Mr Reynolds, who was among the highest paid actors this year after appearing in the Netflix films 6 Underground and Red Notice, became a shareholder in Aviation American Gin in 2018.

He not only stars in all of its adverts, but also has creative control of its marketing.

In a statement, he said he loved the taste of Aviation, but had not expected “the sheer creative joy learning a new industry would bring”.

Diageo boss Ivan Menezes said the acquisition was in line with the firm’s “strategy to acquire high growth brands with attractive margins that support premiumisation”.

It reflects a wider trend of consumers drinking less alcohol, but choosing to pay more for higher quality tipples.

According to Diageo, Aviation American is now the second-largest brand in the “super premium gin” category in the US and one of the fastest-growing.

A bottle typically costs $27 in the US.

Under the deal, Mr Reynolds and other shareholders will share in an initial payment of $335m and a further potential consideration of up to $275m based on the performance of Aviation American Gin over the next decade.

The actor is not a controlling shareholder, but holds a large stake and is likely to a get a sizeable payout, according to reports.

The brands Astral Tequila, Sombra Mezcal and TYKU Sake are also being sold as part of the deal.

The deal is Diageo’s fourth big tie-up with a celebrity-fronted alcohol business.

In 2017, it bought George Clooney’s Casamigos tequila brand for $700m. In 2014, it teamed up with P Diddy to buy DeLeón tequila, having already struck a deal with the rapper to market Cîroc vodka in the US.

It also has a marketing partnership with the footballer David Beckham for its Haig Club whisky.