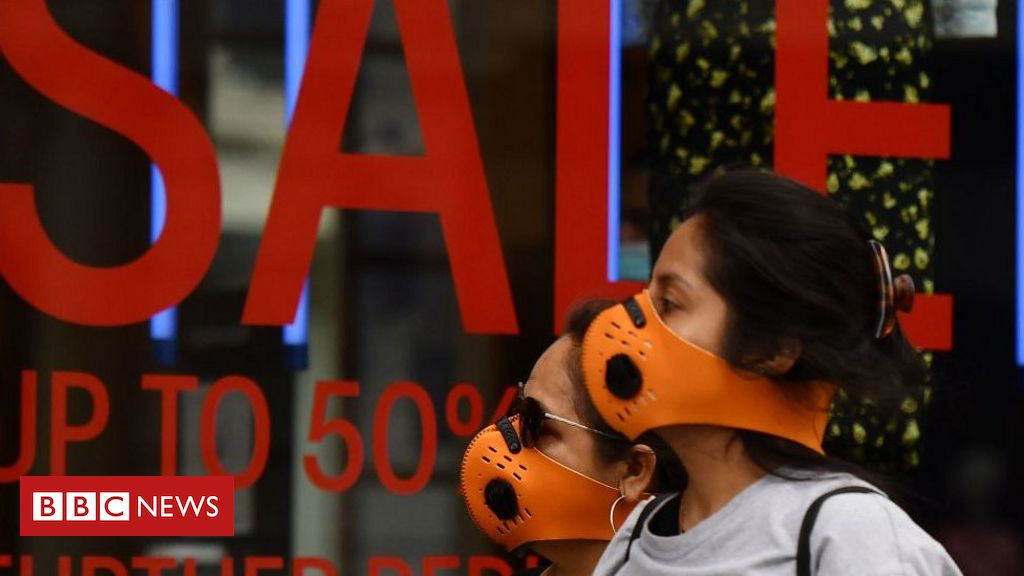 
UK retail sales were near pre-lockdown levels in June, as the reopening of shops released pent-up demand.

The amount of goods sold last month increased by 13.9% compared to May, according to the Office for National Statistics (ONS).

Separately, a closely watched survey showed that activity in the UK’s services and manufacturing sectors returned to growth last month.

However, economists warned that the country’s recovery would take time.

June’s rise in retail sales followed record falls in April and a partial recovery in May as the coronavirus pandemic led to widespread shop closures.

But it masked “big changes” in retail, with food and online sales up, while clothing was still “struggling”, the ONS said.

Online sales continued to go “from strength to strength”, the ONS added, accounting for £3 out of every £10 spent by consumers.

Compared with February, the volume of food sales was 5.3% higher while non-store retailing grew by 53.6%.

The ONS said the rebound had brought overall retail sales back to a similar level to where they were pre-lockdown, but there was a “mixed picture” in different store types.

In June, non-food stores, including department stores and clothes shops, partially recovered from strong falls during the lockdown but were still 15% lower than in February.

Non-essential shops in England were not allowed to reopen until 15 June, so they were only trading for half the month.

Jonathan Athow, ONS deputy national statistician, told the BBC that there had been “some really big changes under the surface” of the retail landscape since lockdown began.

“Food shops continue to do quite well, as we’re eating at home more,” he said.

“But the real growth has been in online sales. Online sales continue to go from strength to strength.”

Britain’s nation of shoppers has come to the fore.

The amount of what we buy is virtually back to pre-crisis levels – but that doesn’t signal a wider full bounce-back in our economic fortunes.

This is for a couple of reasons. Firstly, what we buy has changed: more online, more staples, fewer impulse forays onto the High Street.

While there was an initial flurry in sales of clothing and household goods immediately after non-essential shops opened in June, more timely data on payments suggested that tailed off in July.

The fallout can be seen in the mounting job losses announced by stalwarts, from John Lewis to M&S.

Secondly, retail sales are only part of the recovery jigsaw, totalling about a fifth of the economy.

Factories and building sites are coming back to life. But the big unknown is spending on services such as restaurants, bars and hotels – so-called “social spending”.

Even with eating out vouchers and VAT cuts, a full and rapid recovery there seems unlikely.

And it is these sectors that have suffered most and have furloughed the vast majority of their staff. Their future will hinge on how spending convalesces there.

“Some of that is due to the restrictions, which were only relaxed part-way through June in England. Clothing is down by about a third.

Clothing sales did rise 70% month-on-month in June, but from a very low base, meaning that they are still well below pre-lockdown levels.

Mr Athow said they had fallen so far that “virtually any pick-up will look like a big number”.

The proportion of online spending reduced to 31.8% in June from the record 33.3% reported in May, but was well up on the 20% reported in February, said the ONS.

Meanwhile, a survey measuring new orders, employment and business sentiment in the services and manufacturing sectors indicated a return to growth during June.

The “flash” – or preliminary – Purchasing Managers’ Index (PMI), compiled by IHS Markit and CIPS, rose to 57.1 in July, up sharply from 47.7 last month.

It was the first time since February that it was above 50, indicating expansion.

However, Markit’s chief business economist, Chris Williamson, cautioned: “While the recession looks to have been brief, the scars are likely to be deep.”

‘Online is how I have been able to survive’

One businesswoman who has taken advantage of the move to online shopping is Hellen Stirling-Baker of Small Stuff, a Sheffield-based independent retailer.

She sells sustainably made toys, gifts and homewares for young children.

“Driving my store online is how I have been able to survive,” she said.

“Offering face-to-face video calling for customers to recreate the in-store experience has been crucial and sales are picking up.

‘Hope on the horizon’

“The motto of the British consumer has long been ‘When the going gets tough, the tough go shopping’ and it seems like June encapsulated that well,” he added.

Silvia Rindone, retail partner at EY, said the latest figures showed there was “some hope on the horizon”, with consumers beginning to show “a cautious optimism”.

But she added: “We’re still not past the pandemic and getting back to ‘normal’ will still take time.