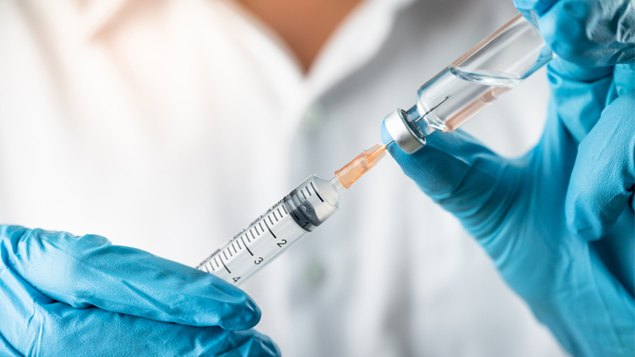 With the imminent arrival of viable Covid-19 vaccines, the UK, and NHS, is gearing up for perhaps the biggest mass vaccination programme in its history. Occupational health practitioners, especially those working within the NHS, will have a key role to play, but there are also difficult questions that have yet to be answered. Nic Paton reports.

The news this month that a viable Covid-19 vaccine rollout – with not just one but three candidates in the mix – is now within touching distance is, of course, hugely positive after months of grim pandemic headlines.

Nevertheless, whether as a nation we end up being jabbed over the coming weeks and months with the Pfizer BioNTech, the Moderna or (most likely in the longer term) the Oxford University/AstraZeneca vaccine, there is a huge logistical delivery challenge ahead, and one where occupational health is likely to play its own important part.

With their track record on delivering the annual flu jab as well as travel vaccinations and others, OH practitioners are, rightly, deemed leaders in the practicalities of vaccine delivery.

As Jean Piernicki, an OH nurse manager working in the NHS tells Occupational Health & Wellbeing: “We are supporting the initial rolling out of the vaccine because we are, without doubt, experts at delivering mass vaccination campaigns, such as the annual flu campaign and the swine flu campaign pandemic in 2009/10. We like the sound of the Oxford vaccine because lots of our staff at our trust took part in its trial.”

So, how are the logistics of this mass vaccination campaign – perhaps the largest the UK will have ever experienced – set to work? At time of writing in November, many of the details were still sketchy. New laws are set to be rushed through to allow more healthcare workers to administer both flu and Covid-19 vaccines, including suggestions that organisations such as St John Ambulance will recruit and train an army of volunteers.

When it comes to the rollout to the general public, this will initially be to the most vulnerable and elderly, hopefully starting before Christmas but with the bulk of the tiered delivery expected to take place in the first three to four months of 2021. Coronavirus vaccination centres will be set up by the NHS, with the on-the-ground infrastructure likely to be split between hospitals, GP practices and pharmacies. Arenas, conferences centres and other large sites are also in the frame for being used.

Realistically, the sheer scale of what needs to be delivered here – and the relative smallness of occupational health as a profession – means this programme is unlikely to be directly delivered by OH practitioners, with retired doctors, district nurses and physiotherapists already being sought.

NHS Professionals has also put out a call for people to join “Covid-19 vaccine teams”, emphasising that applicants do not even need to be a current NHS healthcare professionals as “vaccine-specific” training will be provided. Similarly, chief medical officers in the devolved nations have begun a recruitment drive, with the CMO for Northern Ireland, for one, calling for expressions of interest from healthcare professionals “to become sessional vaccinators”.

This is not to say of course that individual OH practitioners won’t have a role. Indeed, even before the Oxford University/AstraZeneca announcement in November some OH providers had already started advertising for extra nurses to carry out Covid-19 vaccinations. As one practitioner also tells Occupational Health & Wellbeing: “My employer is seeking expressions of interest in supporting the vaccination campaign. We may be looking at being released on a part-time basis to support health service colleagues, as this would be congruent with our social responsibility agenda.”

When it comes to delivering the vaccine to NHS workers rather than the general public it will be a different story however, with OH very much expected to step up, as Piernicki highlights.

“We will be instrumental in supporting the delivery for our trust. We are not part of the primary care side; that is being rolled out as a separate entity. The big, mass vaccination centres are being run as a separately. OH will be expected to vaccinate our staff. Anyone who vaccinates their staff for flu [in the NHS] will be expected to deliver a campaign for their staff,” she says.

There are likely to be logistical headaches, especially with the storage and transportation of the Pfizer BioNTech vaccine, which needs to be kept at -70°C. “At our trust we do have a freezer that can store at -70°C. However the vaccine is unstable outside of this temperature and has to be transported from a centre hub. There may be some real time challenges,” says Piernicki.

“At the moment we’re looking at a hub model where people come to us. It wouldn’t be a roving model like we do with flu. Obviously the roving model is preferable because it means staff don’t have to take so much time away from the wards and their patients,” she adds.

Beyond the simple logistics of delivery there are significant wider questions and concerns that OH practitioners are beginning to wrestle with.

For example, even though the side-effects for all the vaccines appear so far to be relatively mild, what will this actually mean in practice? “At the moment it sounds like they [the side-effects] are the same as you get from the flu vaccine; that doesn’t mean everyone is going to get them but what does that actually mean if you, say, vaccinate a ward full of staff on duty? We have more questions than we have anywhere near sufficient answers,” says Piernicki.

There are other critical questions for OH around consent, disclosure and data security, as OH adviser Tracy Campbell highlights. “The data protection side is important. It appears it is all going to be linked into Public Health England. But there will need to be some very robust IT input there; there are going to be a lot more admin processes and admin support needed. How is that going to link?

“Trying to identify people from your workforce who are vulnerable is fraught with problems because it is about disclosure, whether or not you can disclose their medical condition, as some prefer not to. And then there is that whole question of vaccine and choice.

“Another thing to throw into this mix is how potentially employers may view the situation when employees choose not to have the vaccine? If somebody decides, for whatever reason, they don’t want to have it and they then come down and get Covid, is there the potential that they could be penalised? I don’t know, and nobody knows,” Campbell says.

This, in turn, leads us into potentially very tricky conversations around vaccine compulsion or whether we might even end up in a two-tier society where those deemed ‘safe’ or ‘clear’ of Covid-19 receive preferential treatment or advantage. Already, the chief executive of Qantas, Alan Joyce, has indicated proof of Covid vaccination might become a prerequisite to fly on his airline. It’s more about testing than vaccination, but there are also reports people who can show two negative Covid tests may get so-called “freedom passes”.

As Andrew Willis, head of legal at business consulancy firm Croner highlights, this could spill over into difficult legal territory, too. “There could be several reasons why employees do not want to take the vaccine; they may have been advised not to due to a pre-existing disability, or the prospect of taking it may be having a negative effect on their mental health. If they are subjected to a detriment as a result of this, such as being told not to come into work or even dismissed, the company may face a costly discrimination claim.”

Finally, even if OH may not be at the heart of the initial mass public vaccination programme, what happens next? There are many questions that still need to be answered around how long post-vaccination immunity will last and whether people may need booster jabs, perhaps annually, such as with flu. Also, once the initial targeted NHS programme has been completed, what about the rest of the UK’s working-age population?

It is clear there is going to be demand from some employers to deliver their own programmes to ensure employees can return safely to physical, collaborative working and some form of ‘normality’. As one practitioner highlights: “We have clients who will be happy to pay for the vaccine if it becomes commercially available… not sure how administration records would be fed back to the NHS though.”

For Campbell, once things settle down and when/if Covid-19 becomes another regular on the annual vaccination calendar, that may well be when occupational health really comes centre-stage.

“I think at that later point we will have a part to play. If it were to sit alongside things like flu or travel vaccines that could make sense. I suspect, however, that is probably only going to come from the larger providers; the small or singlehanded providers are probably not going to be in much of a position to get involved although, of course, they could always subcontract to their local NHS or GP practices,” she points out.

“If it becomes part of the standard OH provision, it will come at a cost, and it may be that employers say, ‘actually, I don’t want to pay for that when it is available quite freely on the NHS’. And then you do risk starting to create that two-tier system. If you’re lucky enough to work for an employer that is prepared to get the vaccine in, great; if not, you take your chances and wait for the NHS,” she adds.