Nissan Sunderland plant to protect up to 70,000 jobs 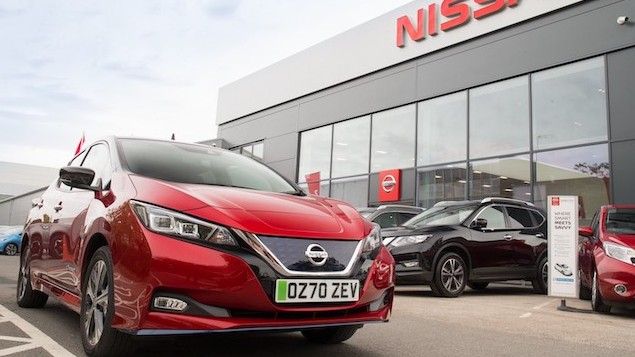 Car maker Nissan has confirmed it will keep its Sunderland plant open for the long term now that a trade deal between the UK and the EU has been reached.

The plant employs 6,000 workers directly and almost 70,000 through its wider supply chain.

Nissan said it will also move electric battery production close to the Sunderland plant, although did not confirm whether this would lead to the creation of more jobs. Currently the batteries for its Leaf electric cars are imported from Japan.

Manufacturing the batteries in the UK will ensure its cars comply with new trade rules that require at least 55% of the car’s value to be derived from either the UK or the EU to qualify for zero tariffs when exported to the EU.

Seven in 10 of the cars made in Sunderland are exported, according to Nissan, and most of these are sold in EU countries.

In May last year, hundreds of workers in a Nissan plant in Spain protested at an announcement that the company would close its manufacturing there, at the same time as chief executive Makoto Uchida confirmed production would remain in Sunderland.

Chief operating officer Ashwani Gupta told the BBC that the Brexit deal had been “positive for Nissan” and an opportunity to “redefine automaking in the UK”.

However, the company was forced to pause production last week in Sunderland after pandemic-related disruption at ports affected its supply chain.

Business Secretary Kwasi Kwarteng welcomed the news that the company would stay in Sunderland. He said: “Nissan’s decision represents a genuine belief in Britain and a huge vote of confidence in our economy thanks to the certainty our trade deal with the EU delivers.

“For the dedicated and highly-skilled workforce in Sunderland, it means the city will be home to Nissan’s latest models for years to come and positions the company to capitalise on the wealth of benefits that will flow from electric vehicle production.”

The future of other auto manufacturers in the UK remains uncertain, however. Unions have called for the recently merged Fiat Chrysler and PSA Group – now known as Stellantis – to confirm that it will invest in electric car production in its Ellesmere Port and Luton factories.

Unite national officer for automotive industries Des Quinn said the merger was good news for members but they were keen for confirmation on jobs.

He said: “We welcome the approval of both sets of shareholders to create the fourth biggest global carmaker and will seek reassurance that the new merged company will continue to commit to no plant closures.

“Specifically in the UK, we call upon PSA to look at a longer term plan to build electrified vehicles at both Luton and Ellesmere Port with future regulatory and legislative changes in mind.

“Previously the management have said that this decision will not be made until there is a clear understanding on the outcome of discussions between the British government and the European Union.

“Now the free trade deal with the EU has been agreed by both sides with no tariffs or quotas, this should create the necessary business environment the company was seeking.”

HR jobs in the engineering and manufacturing sector on Personnel Today

Browse more HR jobs in the engineering and manufacturing sector