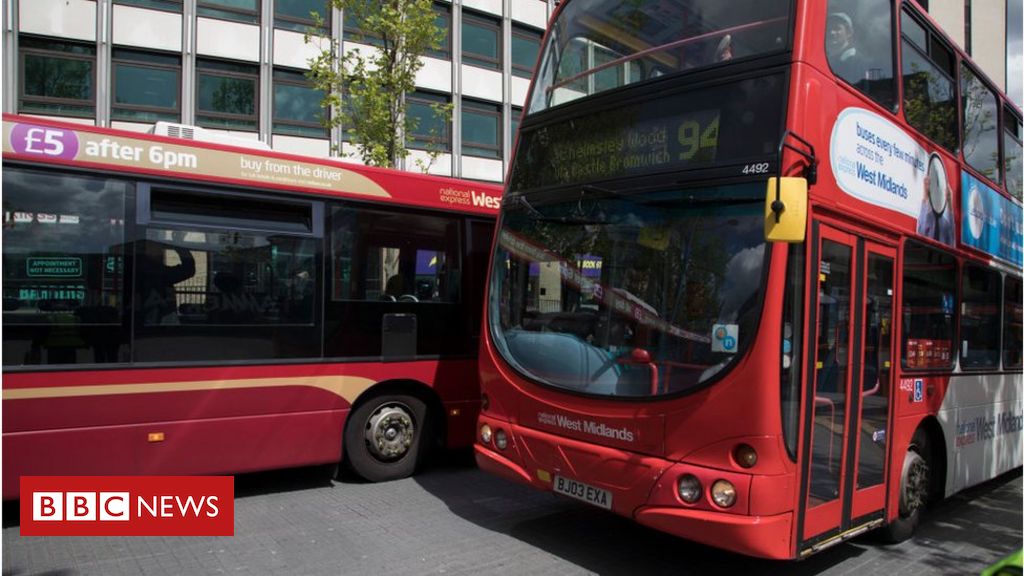 National Express to use jobs bonus to cut bus fares

National Express to use jobs bonus to cut bus fares


National Express has said it will use £4m from the government’s Job Retention Bonus scheme to cut fares on its West Midlands and Dundee bus routes.

It said the move, which will not affect coaches fares, would help boost demand and support the local economies.

The bonus scheme will pay firms £1,000 for each employee brought back from furlough and employed until January.

A Treasury spokesman told the BBC: “There’s no restrictions on how firms can use the bonus payments.”

National Express said it would claim £4m from the Job Retention Bonus scheme for staff on its West Midlands and Dundee bus services, suggesting 4,000 workers will be brought back from furlough and employed until at least January.

It said a “sizeable proportion” of its remaining 3,000 staff had also been furloughed, and some but not all had been brought back to work.

It told the BBC it had no plans to cut jobs.

Companies including retailer Primark, property website Rightmove and catering giant Compass have already said they will reject the offer of millions of pounds in payouts.

‘Future of our region’

National Express is the biggest bus operator in the West Midlands, carrying about 90% of the region’s passengers. Its Dundee service is much smaller but it runs the majority of buses in the city.

Tom Stables, managing director of National Express UK, said: “By using our allowance from the chancellor’s job retention bonus to reduce fares across the West Midlands, we are investing in the future of our region.

“Making bus travel cheaper will help get our local high streets back on their feet, lock in the environmental benefits that came out of lockdown and get the people of the West Midlands back to work.

“And of course as a transport operator, we always want to persuade more people to get the bus.”

National Express Group is best known for its coach services, but also runs bus, train and tram routes in the UK and overseas. It employs 7,000 people in the UK.

Like others, it had to temporarily close services during lockdown and has run reduced timetables since restrictions were eased.

National Express said it had seen passenger demand slump after lockdown by 80% across the group, while revenue for the six months to June dropped more than 20%,

A number of its UK and international frontline staff have also died after contracting Covid-19.

The government’s job retention bonus scheme is intended to provide an incentive for companies to keep workers employed as the furlough scheme, which helped pay wages, is phased out and ends on October.

If every eligible worker is covered it will cost £7bn – making it a major plank of Chancellor Rishi Sunak’s £30bn economic recovery plan.

Defending the scheme last month, Mr Sunak said it would “serve as a significant incentive” to preserve jobs amid the pandemic.

But economists have questioned its value for money, while Labour has called for an inquiry into its efficacy.

Fashion retailer Asos, holiday park operator Center Parcs and retailer John Lewis are among others to have said they will not use the bonus.