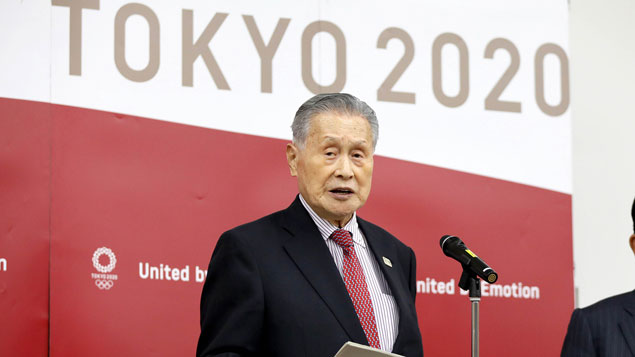 The head of the Tokyo 2020 Olympics organising committee, Yoshiro Mori, has apologised for denigrating women with sexist remarks about their participation in sports organisations.

The 83-year-old Mori said he would not resign after it emerged he had told a meeting of the Japanese Olympic Committee (JOC) this week that meetings attended by too many women tended to “drag on” because they talked too much.

The former chairman of the Japan Rugby Football Union said: “Women have a strong sense of rivalry. If one raises her hand to speak, all the others feel the need to speak, too. Everyone ends up saying something.”

He added: “If I say too much, the newspapers are going to write that I said bad things, but I heard somebody say that if we are to increase the number of female board members, we have to regulate speaking time to some extent, or else we’ll never be able to finish. I am not going to say who said that.”

“We have about seven women at the organising committee but everyone understands their place.”

At a press conference on 4 February, Mori said: “I am not thinking of resigning. I have been working hard and devoted myself to helping [the Tokyo Olympics] for seven years. I will not be stepping down.”

Asked why he had claimed that women talked too much at board meetings, he replied: “I don’t talk to women that much these days, so I don’t know.”

He acknowledged that his comments had been “inappropriate” and were not in line with the Olympic spirit.

His comments were condemned by female politicians and sports administrators.

“Gender equality and consideration for people with disabilities were supposed to be a given for the Tokyo Games,” she said. “It is unfortunate to see the president of the organising committee make a remark like that.”

“Mori, please resign,” was trending on Twitter in Japan on Thursday, while Noriko Mizoguchi, a former judo silver medallist, tweeted the International Olympic Committee’s code of ethics and said any form of harassment should be rejected.

Mori had earlier told the Mainichi Shimbun newspaper that he had not intended to demean women and had been criticised by his wife, daughter and granddaughter.

“My wife was angry with me last night,” he told the newspaper. “She said, ‘You’ve gone and said something stupid again. You make an enemy of women and I’m the one who has to suffer.’”

The JOC is attempting to improve female representation by doubling the proportion of women on its 25-member board of directors to 40%.

Japan’s chief cabinet secretary, Katsunobu Kato, told reporters he was not aware of the details of Mori’s comments but said the government was committed to gender equality and seeing more women in leadership roles in sports.

Japan ranks 121 out of 153 countries in the World Economic Forum’s 2020 global gender gap report indicating that women disproportionately are expected to take on domestic household duties and not take on careers.

Tokyo’s governor, Yuriko Koike, said talking too much was down to personality, not gender. She added that it was obvious women should be included in decision-making.

Mori had already drawn criticism by insisting the Tokyo Olympics, whose future is again in doubt due to the coronavirus, would go ahead “regardless” of how the pandemic looks by the time they are due to open on 23 July.

He also has a history of criticising individual competitors, such as figure skater Mao Asada and ice dancers who represent Japan but live in the US, and also lambasted Japan’s team at the Rio Olympics in 2016 for not singing the national anthem loudly enough.