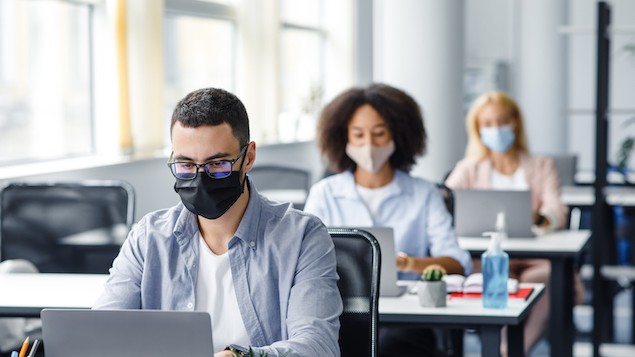 19% of those asked to go into work could do their jobs from home, says the TUC
Shutterstock

One in five working people are still going into work some or all of the time, according to a poll by the TUC.

Nineteen per cent of those who are still going to work would be able to do their job from home, the union’s figures showed. Four in 10 said the principal reason they continued to physically go into work when they could work remotely was pressure from managers.

Just over a quarter of workers who were going into work said they preferred being able to go to the workplace for some or all of the week, or liked switching between home and the workplace.

The TUC’s research is concerning amid reports of rising Covid case numbers in workplaces.

Staff at the Driver and Vehicle Licensing Agency (DVLA) in Swansea are due to vote on strike action next week after reports that staff had been forced to go into its headquarters despite a coronavirus outbreak.

One member of staff died with coronavirus and there have been an estimated 500 cases at the contact centre. The PCS union has claimed more than 2,000 staff still go into the site every day to work and described the outbreak as a “scandal” and “a recipe for further Covid cases” and further deaths.

MP Geraint Davies has called for the government to reduce the number of workers coming into the centre, while the DVLA has rejected claims it is an unsafe place to work.

The government has expanded access to workplace testing, with businesses of more than 50 employees now able to offer rapid lateral flow tests to staff who cannot work from home.

TUC general secretary Frances O’Grady said: “No one should be forced into the office or another workplace if they can do their job from home. Bad bosses are needlessly putting workers at risk and increasing transmission in local communities.”

Her sentiments were echoed by the outgoing director of labour market enforcement Matthew Taylor, who called for employers breaking Covid health and safety rules to be named, shamed and fined.

“The government does it for the minimum wage,” he said. “I’ve argued they should do it for all companies involved in the supply chain where there’s examples of modern slavery or severe labour abuse. No employer wants to read their name on a list of companies who have not observed the spirit or letter of the rules.”

The guidance from government remains that employees should work from home unless their job prevents them from doing so.