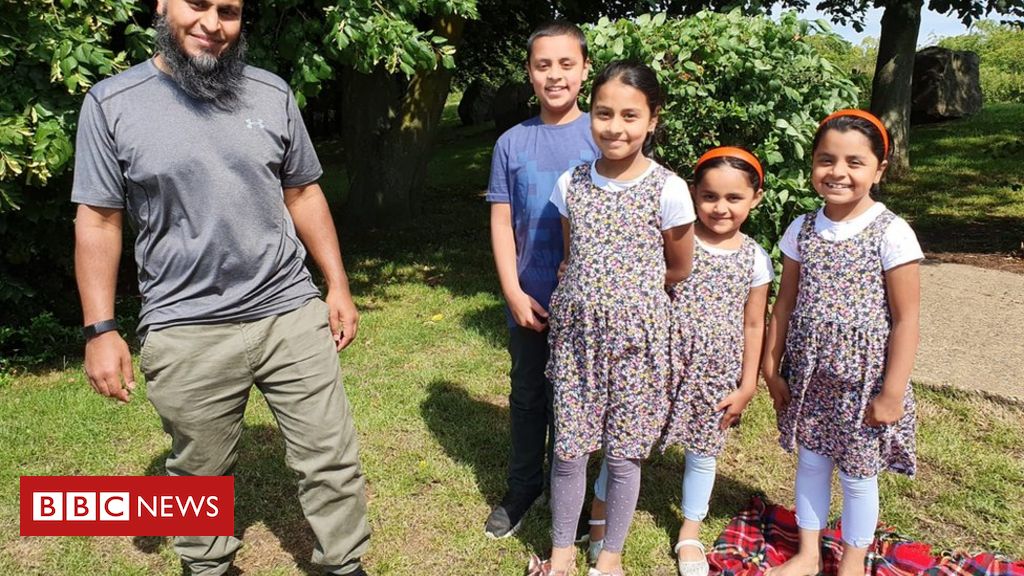 
Service stations are the multiple beating hearts of the nation’s road system. On the first Monday since the coronavirus alert level was downgraded, the BBC visited the UK’s first motorway services to test its pulse and to find out where its visitors were heading to.

When Watford Gap opened as the humble Blue Boar cafe 60 years ago, it became the UK’s first motorway service station.

For many villagers living nearby, it became a destination in and of itself. It had a futuristic and even sophisticated air, with its cafe run by uniformed service staff.

Six decades on and what became known as the Watford Gap services, on the M1 in Northamptonshire, is a different beast altogether, with newsagents, various food outlets and even a clothing store.

It might be far emptier than normal but even the slightest scratch beneath the surface reveals some remarkable – and, in some cases, incredibly poignant – personal stories.

Sitting with four of his children enjoying a picnic outside the services, Mr Rahman is stopping off on his way from Leicester to Peckham in London.

His family has formed a social bubble with his mother in London, whom he has not seen in five months. It is to her home that the five Rahmans are travelling.

“She knows nothing about it,” he says. “It’s a surprise trip.” (If you’re reading this and know Mr Rahman, please don’t spoil the surprise!)

“I’m a hugger and the first thing I’m going to do when I see my mum is hug her.

“I can’t wait. It’s such an emotional trip, I’m so excited to see her I have a lump in my throat just thinking about it.

“We have video calls every week but to see her in person makes all the difference.

“We’ll just sit in the garden and catch up.”

Higher education teacher Thomas Despositos, a German national, is making an eight-hour journey with wife Julia Turrell and daughter Isabella for a 15-minute appointment at the German embassy in London.

Travelling from Rochdale, they are making the trip to get Isabella a German passport, which Mr Despositos said needed to be done urgently before she turns 18.

“This is my first trip out since the lockdown,” he said, “other than going to the supermarket, and I hope it’ll be the last until Christmas when hopefully there’ll be a vaccine.

“I’m very concerned about catching the virus. If I get it at my age then I might not survive.

“We’re not even seeing friends in London.

“We’re going there and back in a day because it’s an essential trip. Otherwise we wouldn’t be doing it. I try to entirely avoid travelling.”

The past few weeks have been a worrying and surreal experience for those involved at the services.

“At the start of lockdown, this site was painful to see,” says Mark Fox, chief executive of Roadchef, which runs Watford Gap. “It looked like a service station under construction it was so empty.

“Staff told us the worst part was the silence and lack of people. I’d never seen it so quiet.”

Grandmother Sally Gilling has been a staff member at Watford Gap’s WH Smith for the past 10 months.

“It’s massively different and so strange,” she said of her current working life. Most customers have been understanding, she said, although there has been some inconsiderateness.

“One man leant over me as I was restocking the shelves. I reminded him to keep a 2m distance and he said, ‘but I need to get a sandwich’.”

The Watford Gap Costa Coffee is one of the busiest on the nation’s road network.

“People are generally understanding and stick to the rules.

“It can be difficult to hear customers though, with the machines going and when they’re wearing masks.”

The time people currently spend at the Watford Gap services has roughly halved since before lockdown – from about 25 minutes to between 10 and 12 minutes.

Roadchef boss Mr Fox said road traffic at the start of lockdown was down 93%. It has since increased and is 35% down on what might usually be expected.

Along with the dramatic reduction in visitors, and therefore spending, there have been areas of necessary extra expenditure.

In the past six weeks Roadchef has spent £350,000 on signs, barriers, screens and outdoor furniture across its 30 sites nationally.

Mr Fox has two main hopes – a “staycation” boom in July and August and a reduction in the social distancing rule from 2m (about 6ft) to 1m. The latter, he said “would significantly increase our ability to serve customers, like the rest of the hospitality industry”.

Of all those at Watford Gap, there was a visitor who had very little interest in any social distancing rules.

Her name is Bella, a four month-old rottweiler heading from Chesterfield to Southampton to live with her new family.

For Suzanne Iliniec, collecting Bella has marked her first car trip since lockdown began in March.

“As long as you keep a two-metre distance, I don’t think there’s much to worry about. And hopefully the end is in sight and we’re over the worst.”