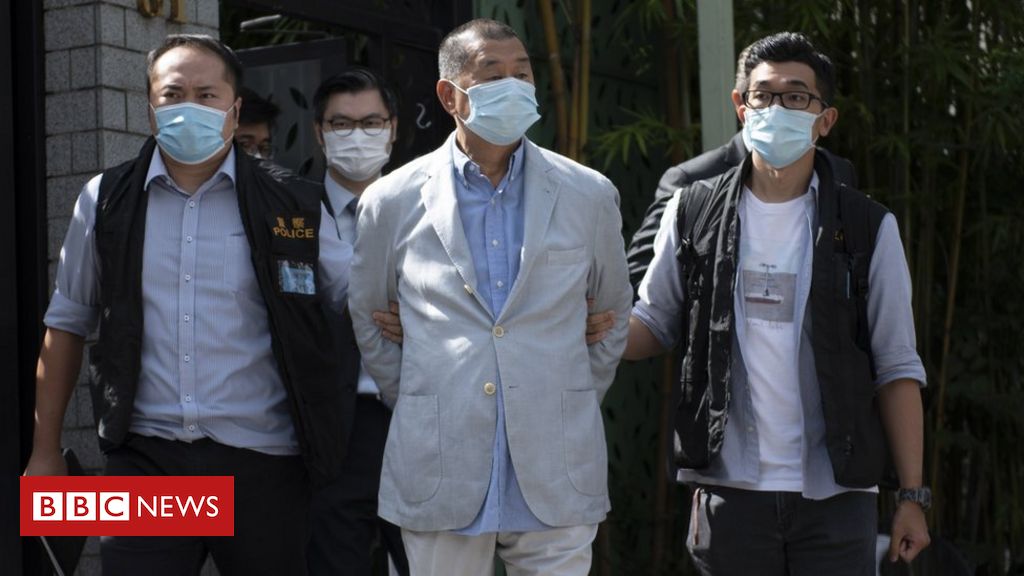 
Hong Kong business tycoon Jimmy Lai has been arrested and his newspaper offices raided by police over allegations of collusion with foreign forces.

His case is the most high-profile arrest so far under the controversial security law imposed by China in June.

Mr Lai has been a prominent pro-democracy voice and a supporter of protests that erupted last year.

In February the 71-year-old, who also holds UK citizenship, was charged with illegal assembly and intimidation.

He was granted police bail.

Chinese state media Global Times on Monday described Mr Lai as “riot supporter” and his publications as having been “instigating hatred, spreading rumors and smearing Hong Kong authorities and the mainland for years”.

The Global Times also reported that two of his sons as well as two senior executives of Next Digital had also been arrested.

Scores of police were also seen entering the building of his newspaper Apple Daily, searching the offices.

Police confirmed on Facebook that seven men aged 39-72 had been arrested on “suspicion of collusion with foreign forces” and other offences, but did not name Mr Lai.

The sight of nearly 200 police officers raiding the newsroom of Apple Daily, the biggest pro-democracy newspaper in Hong Kong, is a shocking one for many here and a sign that things are changing rapidly.

One Apple Daily employee told me that his colleagues were calm and had seen this coming when the National Security Law was passed.

Mr Lai has been a very vocal critic of both the Hong Kong government and of Beijing’s increasingly assertive presence in the territory.

For that, China’s official news media have often branded him the leader of the “Gang of Four” which incites unrest in the city. Beijing was also infuriated when he met US Vice President Mike Pence and Secretary of State Mike Pompeo last year.

But while Next Media has often been criticised for its sensationalism, it remains one of the very few media outlets with an owner who has no business interest in mainland China.

The newspaper, which celebrates its 25th anniversary this year, is already under financial stain. The paper has said it will get today’s issue out on time but if its flamboyant owner is silenced it is unclear whether it will survive.

Who is Jimmy Lai?

The businessman is estimated to be worth more than $1bn (£766m).

Having made his initial fortune in the clothing industry, he later ventured into media and founded the newspaper Apple Daily, which is frequently critical of Hong Kong and mainland Chinese leadership.

He has also been himself an activist against Beijing’s increasingly tight grip on the Hong Kong. In 2019 he supported the reform protests and participated in the demonstrations.

On 30 June, when the security law was passed, Mr Lai told the BBC that this “spells the death knell for Hong Kong”.

He warned that Hong Kong would become as corrupt as mainland China because “without the rule of law, people who do business here will have no protection”.

In a separate interview with the AFP news agency, Mr Lai said: “I’m prepared for prison. If it comes, I will have the opportunity to read books I haven’t read. The only thing I can do is to be positive.”

What has been the reaction?

Unnamed sources within Apple Daily are cited as saying the company was “arranging lawyers” seeing the situation as “straight harassment”.

“Jimmy Lai should be released at once and any charges dropped,” he said.

Wang Dan, dissident and exiled student leader of the 1989 Tiananmen Square protests, said the arrest “was expected” but “very outrageous because his two sons were also arrested, which was obviously an attempt by the authorities to destroy Lai’s will through family ties,” Wang said on social media.

“I call on the international community to take immediate action.”

Mr Wong was last week charged along with more than 20 others over taking part in a banned candlelight vigil on 4 June to mark the anniversary of the Tiananmen crackdown.

What is the new security law?

Hong Kong has had a high degree of autonomy since it was returned to Chinese rule in 1997, and its residents have had a far higher level of freedom of speech and media than people on the mainland.

But the law’s key provisions include that crimes of secession, subversion, terrorism and collusion with foreign forces are punishable by a maximum sentence of life in prison.

It makes it easier to punish protesters, and reduces the Hong Kong’s autonomy.

The law also gives Beijing powers to shape life in the former British colony in a way it has never had before.

Critics say it effectively curtails protest and freedom of speech – China has said the new law will return stability to the territory after a year of unrest.

There have been two previous waves of arrests since the law was passed by Beijing on 30 June.

The first one saw several protesters arrested the next day, as they staged a demonstration.

On 30 July, four students and former pro-independence activists were arrested under the law.

Other activists, like high-profile protest leader Nathan Law, fled the city before the security law came into force.

Mr Law is currently in the UK but media reports are suggesting that Chinese authorities are seeking the arrest of him and other activists in exile.