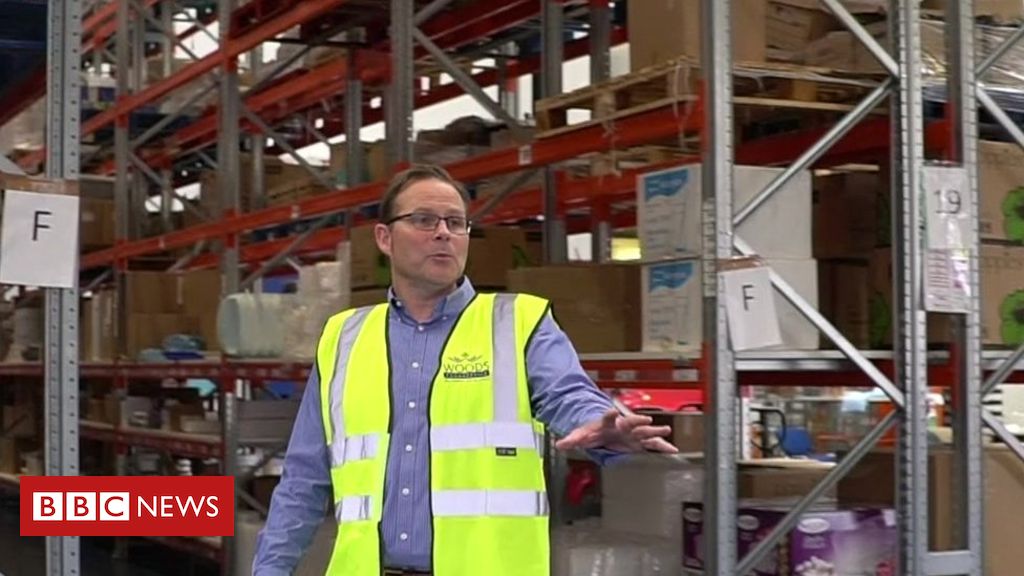 ‘It makes me upset coming here, it’s a ghost town’

‘It makes me upset coming here, it’s a ghost town’


“It makes me upset coming down here – it’s like a ghost town”.

As the managing director of the 40-year-old wholesale business Woods Foodservice, he’s used to a hive of activity.

“Usually there would be five forklifts whizzing around, lorries unloading, a queue of lorries bringing in pallets of stock,” he says. “It was a 24-seven business with bodies everywhere”.

The Uxbridge-based wholesaler supplies restaurants and pubs. When their businesses were shuttered, Woods lost almost all of its turnover.

Now the company’s fleet of vans sits idle outside.

It has survived by furloughing its staff and selling food directly to households.

But that only contributes a fraction of its previous income.

Even those sales have dwindled as supermarket activity has returned to normal over the last few months.

As pubs and restaurants start to think about opening up, wholesalers are concerned that there is still too much uncertainty to expect business to bounce back.

“Many of our customers say they won’t re-open until September, and that would be a disaster for us”.

One of their customers is the Greene Oak pub in Windsor. They have started a village shop to keep them and their suppliers ticking over. But while there was an initial flurry of customers, that interest has died down.

Landlord James Lyons-Shaw is expecting sales to drop to 30% when they open their doors again and he says things will be tough for everyone in the industry.

“There are a lot of businesses behind bars and restaurants. If we’re not doing well they’re not doing well. All of us are dependent on customers coming back and with enthusiasm to spend money.”

He is concerned that safety measures introduced to protect customers will “take the fun” out of eating out, and put people off going to the pub.

“Wholesalers are being squeezed”

A major issue for wholesalers is paying for the large spaces they need to store their goods.

Their customers – pubs and restaurants – were told they didn’t have to pay business rates, a tax on their buildings, from March.

Wholesalers, however, still do.

The Federation of Wholesale Distributors says this is an anomaly and would like to see the government extend rates relief to those who supply the hospitality industry.

Chief Executive James Bielby says half of the members they spoke to in a recent survey said they think they will collapse by Christmas without help.

“Wholesalers are being squeezed because outstanding customers aren’t paying their bills, while suppliers at the other end still require payment. There’ll be no profit until this time next year at the earliest”.

While Darren Labbett says that government’s job retention scheme has saved his company, he still feels it is unfair that his business rates are due.

“We have a 30,000 square foot warehouse which rent and rates need to be paid on and we haven’t got any revenue coming in. I can’t reduce the size of the warehouse”.

“A sector in crisis”

Earlier this month, a group of cross-party MPs wrote to the government to warn that the sector is now in crisis and to ask them to extend business rates relief to wholesalers.

They said that without more support, there could be an impact on the UK’s food supply, businesses could collapse and jobs could be lost.

In response, the government says there is already support in place for wholesalers in the shape of the furlough scheme and business loans and that Local Authorities can choose to make grants to businesses if they feel there is a particular local need.