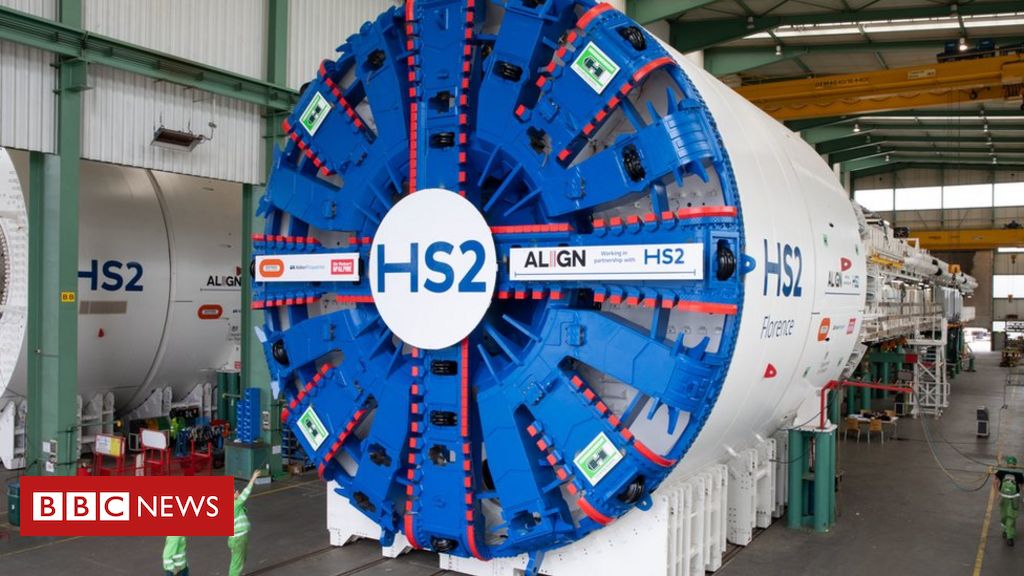 
Construction work on HS2 officially begins on Friday, with companies behind the controversial high-speed rail project expecting to create 22,000 jobs in the next few years.

He endorsed the rail link in February, with formal government approval granted in April despite lockdown.

But critics said HS2 will also cost jobs, and vowed to continue protesting.

HS2 is set to link London, Birmingham, Manchester and Leeds. It is hoped the 20-year project will reduce passenger overcrowding and help rebalance the UK’s economy through investment in transport links outside London.

When the project was first mooted in 2015, it was set to cost an estimated £56bn.

But an official government report has since warned that it could cost more than £100bn and be up to five years behind schedule.

Some critics of HS2 describe it as a “vanity project” and say the money would be better spent on better connections between different parts of northern England. Others, such as the Stop HS2 pressure group, say it will cause considerable environmental damage.

The prime minister said HS2 was at the heart of government plans to “build back better” and would form “the spine of our country’s transport network”.

“But HS2’s transformational potential goes even further,” he added. “By creating hundreds of apprenticeships and thousands of skilled jobs, HS2 will fire up economic growth and help to rebalance opportunity across this country for years to come.”

HS2’s main works contractor for the West Midlands, the Balfour Beatty Vinci Joint Venture, has said it expects to be one of the biggest recruiters in the West Midlands over the next two years.

Up to 7,000 skilled jobs would be required to complete its section of the HS2 route, it said, with women and under-25s the core focus for recruitment and skills investment.

Other firms hiring include:

HS2 Ltd’s Mr Thurston said the railway would be “transformative” for the UK.

“With the start of construction, the reality of high speed journeys joining up Britain’s biggest cities in the North and Midlands and using that connectivity to help level up the country has just moved a step closer,” he added.

Campaign group Stop HS2 said Boris Johnson and others who hail the creation of 22,000 jobs are “rather less keen to mention that HS2 is projected to permanently displace almost that many jobs”. Said Stop HS2 campaign manager Joe Rukin: “Trying to spin HS2 as a job creation scheme is beyond desperate… Creating 22,000 jobs works out at almost £2m just to create a single job.”

And HS2 chairwoman Penny Gaines called the project “environmentally destructive” to wildlife: “This is why there are currently hundreds of activists camped out along the HS2 route. We don’t expect them to go away any time soon.”

However, the Northern Powerhouse Partnership (NPP), which fights for investment in the regional economy, said such major infrastructure projects are transformative and called for the planned extensions of HS2 to be started as soon as possible.

“Increasing capacity on the North’s rail network and better connecting our towns and cities will be vital in the economic regeneration of the Northern Powerhouse – both now and long in the future,” said Henri Murison, director of the NPP.

This is an important symbolic move for HS2, but in the real world it changes very little.

Work preparing for the new line – demolishing buildings and clearing sites for example – has already been going on for the past three years. And in some areas, construction work has also begun.

But the arguments over whether or not the railway should actually be built are continuing to rage.

The government has long insisted that it will help re-balance the country’s economy, by promoting investment outside London. It now says the jobs created by the scheme will support the post-Covid recovery.

But opponents claim that lockdown has undermined the case for HS2 – by showing how easily people can work remotely, and how little business travel is really needed.

Same dispute, new arguments. But now shovels are – officially – in the ground.