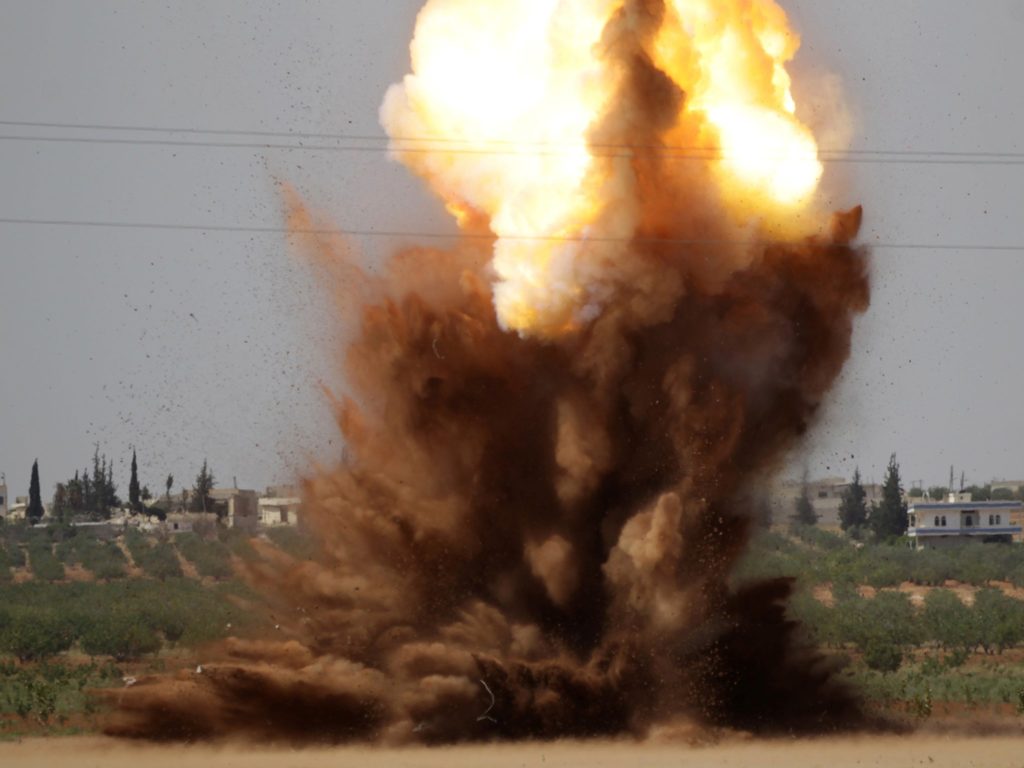 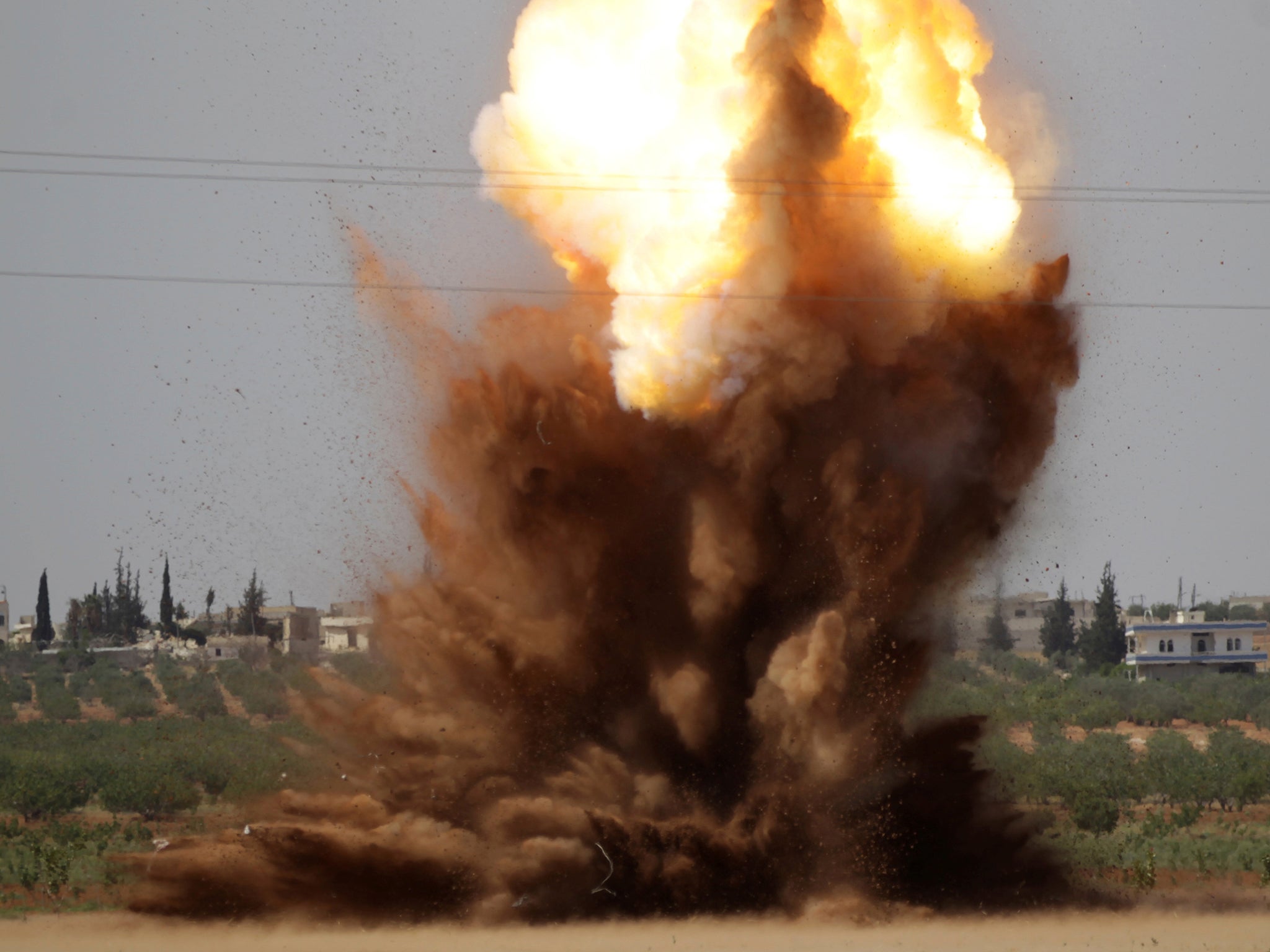 Cluster munitions spread out a deadly shower of hundreds of small bombs over an area as wide as several football pitches. Many of those so-called bomblets don’t explode on impact but remain scattered across war zones as deadly duds until someone accidentally sets them off and is often killed or maimed.

They have recently been used to devastating effect in conflicts in Syria and Yemen. They have been banned for more than a decade by an international treaty signed by 108 countries, including the UK (though notably not the US), because they cause excessive and indiscriminate harm to civilians.

Yet ordinary savers could be unwittingly investing in them via their pensions, thanks to the lax policies of the world’s biggest money managers, according to campaigners.

Data collected by ShareAction shows that US money managers BlackRock, State Street and Vanguard – companies that invest largely for ordinary savers – hold at least $68m (£56m) in four companies that are among the largest cluster bomb makers in the world.

BlackRock, the world’s biggest fund manager, has two companies based in London that invest in cluster munitions, even though the UK has signed up to the treaty banning the weapons.

They are not alone. JPMorgan’s London-based asset management company has £13m invested in the top four cluster munitions makers.

This is not against the rules but, in the view of ShareAction’s Felix Nagrawala, it allows asset managers to “sidestep” an international convention which the UK has signed up to.

“It’s a no-brainer,” he says. “You don’t have to ask the investing public whether they want their pension to be invested in controversial weapons.

“You can immediately exclude them, not to the detriment of the fund, but also comply with the wishes of those you’re investing for.

“It’s absolutely not acceptable that these asset managers are not doing that.”

Much of the money that goes into cluster munitions and other controversial weapons is invested through so-called tracker funds, which have grown rapidly in popularity in the last few years. They follow an index like the FTSE 100 or the S&P 500. If the index goes up, the fund goes up.

“These are the sort of cheap tracker funds that include these sorts of companies that your pension fund will often buy for you,” says Nagrawala.

“That means that if the index those funds are tracking include companies that sells cluster bombs, then so does your pension.

“I think savers would be horrified to learn about the fact that these sorts of companies are in there.”

BlackRock declined to comment but a statement issued this week pointed out that none of its actively managed funds, which make up a minority of its business, have any investments in controversial weapons manufacturers. A Vanguard spokesperson said the company “actively engaged” with company boards on human rights issues.

A JP Morgan spokesperson said the company takes human rights violations “very seriously” and adheres to all international conventions. State Street and did not respond to a request for comment

Investments in cluster munitions are part of a wider problem, highlighted in a report by ShareAction, which suggests many asset managers have paid scant regard to human rights abuses such as modern slavery and child labour.

Researchers surveyed 75 of the largest asset managers and found that just 4 per cent had a dedicated human rights policy. One in seven of those polled made no mention at all about human rights in any of their investment policies.

The majority that do mention the topic have few tangible commitments, the research found. Just under half of those polled (a group controlling a staggering $45 trillion) don’t prohibit investments in controversial weapons banned by international treaties.

Fully 84 per cent of asset managers have nothing in place to prevent them buying bonds issued by regimes implicated in human rights abuses. So there is nothing to stop most fund managers essentially lending savers’ money to a despot or a dictator, as long as their name is not on a list of international sanctions for something like terrorist financing.

This is important because many people do not know which companies and bonds their savings go into, so they rely on the policies of the manager to give confidence that it’s being invested scrupulously.

Nagrawala explains: “Because of the lack of knowledge, people operate on the basis that those investing on their behalf will do so in a responsible way and, as a bare minimum, not invest their hard-earned cash in terrifying activities like cluster munitions.”

Consumers have become increasingly alive to the fact that buying a T-shirt for £2 possibly means that the person making it may be working in conditions akin to slavery.

But when it comes to the tens of thousands of pounds syphoned off our paychecks over the course of our working lives, many of us do not know where much of it goes, or that a chunk of it – however small – could be invested in a company whose weapons might have blown up children in war zones.

This ignorance is understandable because it is often difficult to fathom where the money is invested. Most asset managers publish a one or two-page summary of their fund’s top ten largest holdings and that’s about it.

If you find a full list of investments it will likely contain thousands of company names and there may be sub-funds with hundreds more. To pick out those with a questionable human rights record would be impossible for all but the most diligent investor.

Masters of the universe

ShareAction draws particular attention to so-called passive investors – a dreary name-tag that belies the true nature of what are some of the world’s most powerful, and controversial, companies.

They have rejected the investment industry’s standard business model of paying big bonuses to superstar stockpickers. Instead they simply create funds that track an index, such as the UK’s FTSE 100 or America’s S&P 500.

If Royal Dutch Shell makes up 8 per cent of the FTSE’s value, it will make up the same proportion of BlackRock’s FTSE tracker fund.

Through this simple model, which costs investors about a fraction as much as an actively managed fund, they have attracted astonishing amounts of money. BlackRock manages $7.4 trillion. That’s about two and a half years of the UK’s entire economic output.

Vanguard is a mere trillion dollars behind with $6.2 trillion under its control while State Street is a relative minnow with $2.5 trillion.

On the current trajectory, these three companies will control more than a quarter of the US stock market within a decade.

They argue that they don’t pick the companies, they just follow the index. The investor picks which index they want to put their money in, so the manager doesn’t have responsibility for excluding companies.

But this does not take account of the fact that many ordinary savers may not be aware of all the companies they’re invested in or might not know they are indirectly invested in a tracker through their pension fund.

Share Action wants big fund managers to use their immense power to bring about positive changes in company behaviour. They can pressure companies by voting down executive pay, or in favour of tougher climate change commitments. Alternatively they can simply sell their shares.

“Excluding controversial weapons companies would be a very strong political signal to the market, to the companies, and to governments as well, that activities like making cluster munitions are unethical,” says Nagrawala.

Taking action on countries could also be influential. If there were less buyers for debt issued by dictators and human rights abusers, it would be more expensive for them to go to the markets and raise billions of dollars. Turning off the money taps might in turn influence the behaviour of those regimes.

What to do about it?

There is growing recognition in the asset management industry of the important role it play. Big improvements have been made in recent years and an increasing amount of money is flowing into funds with stricter environmental, social and governance (ESG) rules, which are prevented from investing in certain assets.

Companies in some countries are now obliged to report more about their human rights policies through recent regulations like the UK’s Modern Slavery Act, the Dutch child labour due diligence law, the French duty of vigilance law. That in turn allows investors to better judge how they are performing and make better decisions.

“It’s no surprise that asset managers in those countries, bound by these rules, like Robeco in the Netherlands, BNP Paribas in France and Legal & General Investment Management in the UK, are performing better on human rights,” says Nagrawala. “But, in the US, the Trump administration has made it clear that is not a priority, and the American companies are the poorest performers.”

The Investors’ Alliance for Human Rights recently coordinated a letter pushing for asset managers to do more on human rights. None of the three world’s biggest managers, BlackRock, Vanguard and State Street, signed it.

A spokesperson for Vanguard said: ““Vanguard’s investment stewardship team actively engages with portfolio companies and their boards to discuss material risks such as human rights issues. We have a structured approach to identify and monitor human rights abuses in our portfolios that begins with analysis of third-party research based on the United Nations Global Compact (UNGC).

“Our escalation policy provides flexibility to take actions relevant for each specific situation, which may include direct engagement, letters to company directors and voting measures. Vanguard will hold company boards to account to ensure they conduct business in a socially responsible way.”

A spokesperson for JPMorgan Asset Management said: ““We take human rights violations very seriously and adhere to global conventions. Any company with alleged or proven violations of UNGC principles, including human rights abuses, is scrutinised and may result in either enhanced engagement or removal from a portfolio.

“We engage extensively on workplace conditions, safety and sexual harassment, especially in sectors where the working population is more vulnerable to unsafe or extreme conditions.”