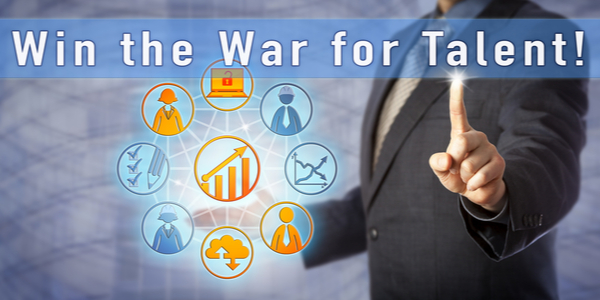 How to Win the War for Talent

How to Win the War for Talent

86% of millennials put values before salary, 82% prefer to work from home at least one day a week. The generation is changing, and HR departments need to up their game to take part in the heating competition, writes Yael Shafrir, Chief Marketing Officer, Meet in Place.

Companies, and HR departments, in particular, are facing unprecedented challenges when it comes to attracting talent, retaining that talent, and effectively keeping talent engaged in achieving organizational excellence.

In this three-part series, we’ll investigate each one of these perils, and discover how leading companies are not only surviving these challenges but thriving in this environment.

In this first installment, we look at tackling perhaps the most difficult of the three: attracting the best talent. This challenge is so profound that it has come to be known as “The War For Talent,” thanks to Steven Hankin of McKinsey and a later book published by the Harvard Business Press.

Why has this war become so intense? What will it take to win the War for Talent?

The Increasingly Severe War For Talent

The War for Talent is heating up. According to Deloitte’s Global Human Capital Trends survey, 70% of respondents cited recruitment as an important issue, with 61% agreeing that finding qualified, experienced hires is the biggest challenge facing them in the recruitment process.

A fascinating example of this is the military. Just as commercial organizations need the best talent to be successful, the military also needs to attract top talent, often without the deep pockets of corporations.

When the economy is slow, recruitment rates increase as job-seekers look for alternative employment options. In a growth climate, however, the military needs to think outside the box to compete. In developing the Navy’s human capital strategy, for example, Assistant Secretary of the Navy Manpower and Reserve Affairs Greg Slavonic said it best: “We are in a war for talent for the civilian workforce, just like we are on the uniformed side.”

The Harvard Business Review notes that “hiring talent remains the number one concern of CEOs in the most recent Conference Board Annual Survey; it’s also the top concern of the entire executive suite.”

This increase in the intensity of the War for Talent is due to several factors, each of which is a challenge in its own right. The picture emerging, however, is a set of interrelated factors causing these challenges, part of a new landscape facing employers and potential recruits alike. These factors include:

Competition For Talent Is Global

In the past, a star developer might have been poached by a rival across town; today, their services might be appropriated by a competitor on another continent. With the move towards a knowledge economy, the best talent does not recognize borders. A talented graphic designer in Kenya can do as good a job as a designer in the U.S – often for less (and even these pay inequalities are set to disappear).

Organizations, therefore, are stepping into a global war for new talent, as well as having to shield their current expertise from competitors worldwide. Platforms like LinkedIn allow any company to recruit – or poach – talent from anywhere in the world.

According to Peter Cappelli, director of the Center for Human Resources at Wharton, writing in the Harvard Business Review: “Census data shows, for example, that the majority of people who took a new job last year weren’t searching for one: Somebody came and got them.”

In a recent article published by the IMF, it was shown that by 2030 there would be a global shortage of more than 85 million tech workers, costing $8.5 trillion in lost annual revenue. The article describes a perfect storm of factors leading to a global talent war, including non-tech companies such as retailers needing technical positions filled; increasing the needs of governments for tech workers; increasing the supply of tech talent from areas such as Israel and Eastern Europe; and massive shortages of talent across the U.S. and Russia.

Illustrating the global nature of this war is the New Zealand city of Wellington. The town was struggling to attract enough skilled workers, so officials came up with an ambitious plan to woo skilled tech workers and their families to the city. They offered to fly in potential hires and their families for interviews while showing off everything the city had to offer. The result? More than 48,000 people from 28 countries applied.

Related to the global nature of the War for Talent, is the decentralization of the workforce of the future. This impacts both organizations searching for talent, as well as potential hires being recruited by those organizations.

Take the case of Invision, the design platform used to craft great customer experiences. It’s valued at almost 2 billion dollars, with $100m in annual recurring revenue. The Invision team of 800 is entirely decentralized or distributed. That means that anyone can work from anywhere, whether in the U.S. or worldwide. This proves that the concept can be a commercial success, and is likely to be used more frequently in the future.

Similarly, Stripe CTO David Singleton announced that the company’s fifth engineering hub would be remote. It’s set to include over a hundred engineers and joins the four existing physical centers in San Francisco, Singapore, Seattle, and Dublin. Says Singleton: “We are doing this to situate product development closer to our customers, improve our ability to tap the 99.74% of talented engineers living outside the metro areas of our first four hubs, and further our mission of increasing the GDP of the internet.”

Then, there is a trend towards allowing employees to work from home – or anywhere that suits them. CNBC quoting a Gallup survey found that 43% of Americans work from back occasionally, a 10% increase since 2012. According to Quartz, citing U.S. Census data, 5.2% of U.S. workers – around 8 million people – worked entirely from home in 2017.

The implication here, again, is that physical presence is being seen as less critical for job performance, increasing both the options employees have in choosing their employer, and the competition for employers in attracting these potential recruits.

This decentralization is having a massive effect on the War for Talent.

A New Set of Priorities For Potential Employees

Further upping the tempo in the War for Talent is the changing nature of the potential rewards hires are looking for in exchange for their services. Whereas in the past, the most competitive salary or benefits package might have sufficed to attract the best talent, today’s employees are looking beyond this as they search for factors such as growth, meaning, and fulfillment.

Case in point: LinkedIn’s Workplace Culture report showed that 86% of millennials would consider a pay cut to work for a company whose mission and values aligned with their own. Compare this with only 9% of baby boomers who would say the same thing.

This change in priorities is impacting the War for Talent in a profound way. As Gallup’s bestseller “It’s The Manager” puts it – based on empirical data – “The solution lies in aligning the practice of management with the new will of the world’s workers.” Put differently, winning this war isn’t about offering “more” – it’s about providing to mean.

Work must have meaning, and potential employees want organizations with a mission and purpose.

Potential hires aren’t swayed by the ping pong tables and well-stocked kitchens. “Giving out toys and entitlements is a leadership mistake – and worse, it’s condescending.”

Millennials and Generation Z need team leaders who can coach them, who value them as individuals and employees, and who help them improve upon their strengths.

Constant communication and feedback are preferred to annual reviews, which are too infrequent and plagued by recency bias to be helpful.

5. Managers who focus on strengths, not weaknesses

Research shows that focusing on strengths is a more efficient way to develop than trying to improve weaknesses. For organizations, a strengths-based culture also helps attract and keep star team members.

As work culture transcends the “nine to five,” employees demand a job that values their strengths and contributions and allows them the space to do what they love every day.

Winning the War for Talent

In addition to the specific factors we’ve looked at in this piece, there are further macroeconomic factors that are exacerbating the squeeze when it comes to the War for Talent. These include a fast-growing economy, low unemployment, and high quit rates. The War for Talent isn’t cooling down anytime soon.

As we’ve seen, winning the War for Talent is about acknowledging the challenges facing organizations when it comes to acquiring top talent, while navigating these challenges with a fresh mindset.

We believe that those who will ultimately win in this War for Talent will think globally, supply and support the infrastructure for a decentralized workforce, and provide meaningful answers to the tough questions future hires are asking.