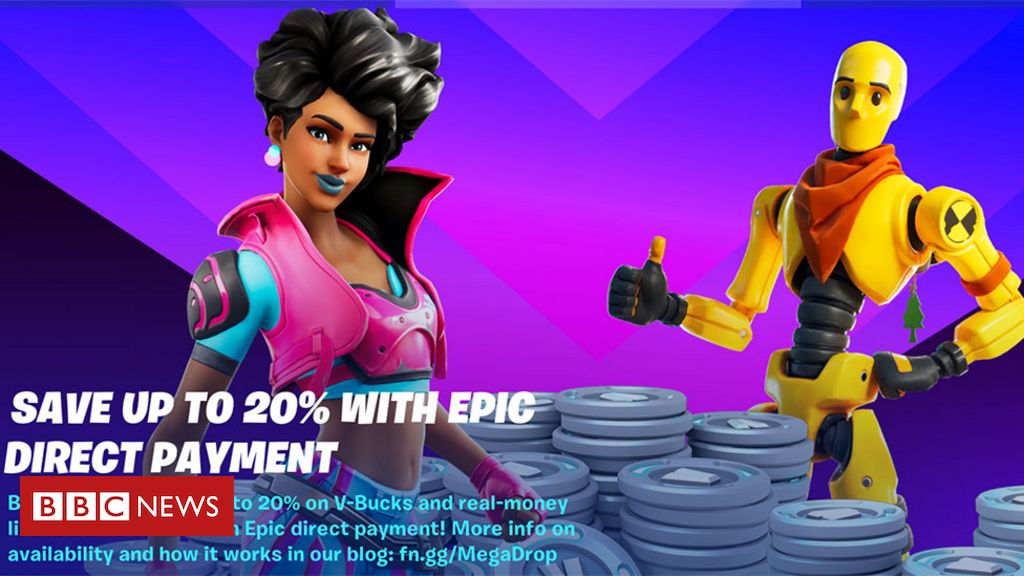 
Apple has removed Fortnite from its app store, essentially making one of the world’s most popular games unplayable on its devices.

It came after an update that allowed players to buy in-game currency at a lower rate if they bought direct from maker Epic Games – bypassing Apple.

Epic appeared to know the ban would come, announcing it had filed a legal complaint minutes after the removal.

Apple takes a 30% cut of all sales from its compulsory in-store payment system.

Those guidelines ban any payment system apart from Apple’s own, and has been the subject of several high-profile rows between developers and Apple.

In addition to tweeting the legal complaint it filed in a California court, Epic also announced the imminent in-game screening of a short film titled Nineteen Eighty-Fortnite – a play on George Orwell’s novel Nineteen Eighty-Four.

The novel is about a dystopian society that controls its citizens and tolerates no dissent – and was itself referenced by Apple in a famous television ad in the year 1984, when the young company styled itself as taking on then-dominant IBM.

Epic Games directly referenced that advertisement in its legal complaint, writing: “Apple has become what it once railed against: the behemoth seeking to control markets, block competition, and stifle innovation.”

The court documents allege that Apple effectively runs a monopoly in both deciding what apps can appear on iPhones and demanding its own payment system – with the relatively high 30% cut – is used.

Developers really, really don’t like this charge. For many, a 30% cut of profits is akin to a shakedown.

Last month, one app developer likened Apple to the mafia. The criticism is essentially an anti-competition one.

Apple and Google run the operating systems of pretty much all of the phones in the world. That means they get to choose who can run apps on their stores, and who can’t.

They also get to set the charges. This is duopoloy, say some developers.

In Epic Games though, Apple has an unwanted foe.

Fortnite is ludicrously profitable, Epic Games has the money to take Apple on. And the way this has been done – passing the savings on the consumer – is clearly tactical. Epic Games wants to take this fight out into the open.

And with the EU and US Congress looking closely at Apple’s business practices, this is attention the company could do without.

But Epic said it was not seeking financial compensation.

“Epic is seeking injunctive relief to allow fair competition in these two key markets that directly affect hundreds of millions of consumers and tens of thousands, if not more, of third-party app developers,” it said.

But the documents also hint at a possible larger goal.

“But for Apple’s illegal restraints, Epic would provide a competing app store on iOS devices, which would allow iOS users to download apps in an innovative, curated store and would provide users the choice to use Epic’s or another third-party’s in-app payment processing tool, ” it says.

Epic Games has already attempted to disrupt the PC gaming market with the launch of its Epic Games Store, taking on the dominant player, Steam, in an attempt to lure players away with free games, which have often been popular, top-rated titles.

The Apple app store move comes less than two months after a high-profile developer railed against Apple’s rejection of an email app from the store over payment systems.

The days-long standoff between Hey email and Apple reignited the uneasy relationship between many developers and one of the two dominant app store owners.

In a statement provided to media, Apple said the rules were applied equally to every developer, and that Epic had updated their game “with the express intent of violating the App Store guidelines”.

“The fact that their business interests now lead them to push for a special arrangement does not change the fact that these guidelines create a level playing field for all developers and make the store safe for all users.”

It added that it would try to work with Epic to bring Fortnite back.