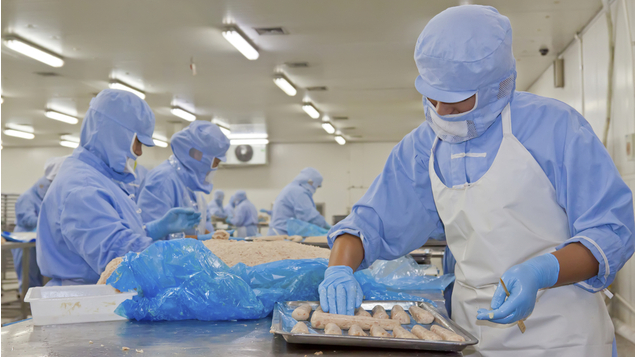 Food processing factories could become “super spreaders” of Covid-19 in the run up to Christmas, the union body the TUC has warned.

People working in food plants already faced a higher chance of contracting Covid-19 because of the lack of airflow, lack of social distancing and low temperatures, the TUC said. But, with the number of temporary workers in food manufacturing set to increase by more than 40% this Christmas, it warned that workplace infections could also grow sharply.

Since March, several UK food factories have been forced to close during the pandemic after reporting hundreds of cases of coronavirus, among them suppliers to major supermarkets. In October, turkey meat manufacturer Bernard Matthews reported 147 positive cases across two sites.

Food processing has also had the third highest rate of outbreaks of any sector across Europe, after care homes and hospitals, according to data from the European Centre for Disease Control and Prevention.

The TUC urged ministers to update workplace health and safety guidance in the run-up to Christmas to deal with a range of issues, including:

TUC general secretary Frances O’Grady said: “There is a real danger that food factories could become ‘super spreaders’ of Covid-19 as they produce turkeys and other seasonal fare for Christmas.

“Out-of-date guidelines on food production, combined with the seasonal increase in staff, will put factory workers at an even higher risk of infection. Ministers urgently need to update the guidance for food production. They must require employers to publish their risk assessments. And they must resource the HSE properly, so it can get into food factories and crack down on unsafe working,” she added.