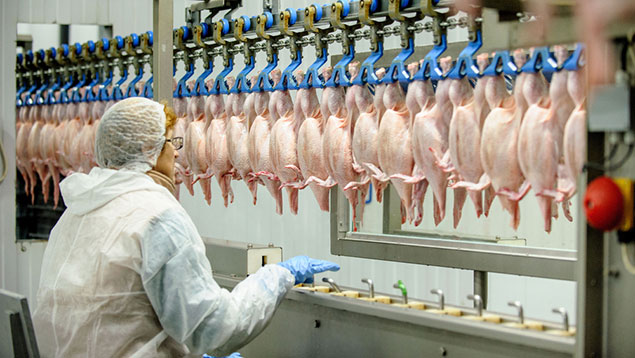 Localised coronavirus outbreaks in several countries have led to questions over working conditions at meat processing plants as almost 160 people on Anglesey, Wales, have been diagnosed with Covid-19.

Production at the 2 Sisters chicken processing plant in Llangefni on the island has been suspended following the outbreak, which has seen 158 people become ill.

The outbreak may yet lead to a lockdown in Anglesey.

Meanwhile, in Wrexham, 38 staff have tested positive at Rowan Foods, which makes food for supermarkets across the UK, and last week 150 employees of the Kober meat processing plant in West Yorkshire tested positive for coronavirus.

Kirklees Council said of the Kober case: “As soon as we became aware of this issue, we acted quickly to work with Public Heath England as well as the business and their staff to limit any further potential spread.

“We are testing the whole workforce and tracing and contacting everyone who is a contact of a positive case.”

According to Public Health Wales, staff and contractors working at the Llangefni processing plant, which has 560 workers, have been asked to self-isolate for 14 days.

It added that all workers were being contacted by 2 Sisters to arrange the tests at three sites: Bangor, Llangefni and Holyhead.

Rowan Foods said 38 of its 1,500 staff were absent because they had tested positive for Covid-19, but added there was “no clear evidence to suggest that there is a spread of the virus within the site”.

Rowan Foods, owned by Oscar Meyer Quality Foods, makes ready meals for companies across the UK, including Aldi, Asda, and Sainsbury’s. A statement from the firm sought to distance the outbreak from its plant: “Whilst we are seeing a number of cases on site, Public Health Wales supports our view that there is no clear evidence to suggest that there is a spread of the virus within the site, we are seeing a reflection on site of the increases in cases within the locality.”

Wales TUC, said it was “alarmed to see a pattern of workplace outbreaks in food manufacturing”, but the companies said they had put staff safety first during the pandemic.

Dr Christopher Johnson, consultant in health protection at Public Health Wales said: “Since we commenced targeted testing last Thursday, over 400 members of staff have provided samples so far. Testing of employees continues, and it is likely that some additional cases will be identified in coming days.

“The increase in cases is as we anticipated when a focused track and trace programme is implemented, and does not mean that the spread of infection is increasing.”

The rise of 100 infections on 21 June in Wales was the largest hike in the nation’s daily figures since 26 May when there were 146 cases.

The outbreaks have raised the question of whether local lockdowns would be an appropriate response. Welsh economy minister Ken Skates told ITV that a local lockdown on Anglesey had not been ruled out because “it would be more desirable than pushing the entire country back into a full lockdown”.

Other countries have also recorded outbreaks in meat processing plants. The Food and Environment Reporting Network (Fern), which has been tracking the outbreaks, has claimed that nearly 30,000 meat plant workers across the US and Europe have been infected with the virus and more than 100 have died.

In Germany, 1,000 infections have been linked to a slaughterhouse in the north-western region of Bielefeld. A quarantine has been ordered for all 6,500 workers, most of whom are from Romania and Bulgaria and who live in company-provided accommodation that is said to be cramped and unsanitary. More than 3,000 workers have been tested so far.

Working conditions have been linked to the outbreaks. Peter Schmidt, the head of international affairs at the German food workers union NGG, told the Guardian: “The entire sector is in a disastrous race to the bottom, driven by the market and by consumer demand for cheap meat.” He added that modern plants in Germany brought in contract workers from Eastern Europe who were prepared to put up with low wages.

Conditions at US plants were also thought to be responsible for outbreaks with people, often migrant workers, enduring long shifts working very close together at high speed. Ben Lilliston, of the Institute for Agriculture and Trade Policy, told the Guardian: “We still have workers dying here. The inherent problems in the way that packing plants are set up are still there.” Under Trump, labour officials have been cut back, while line speeds have been increased, he said.