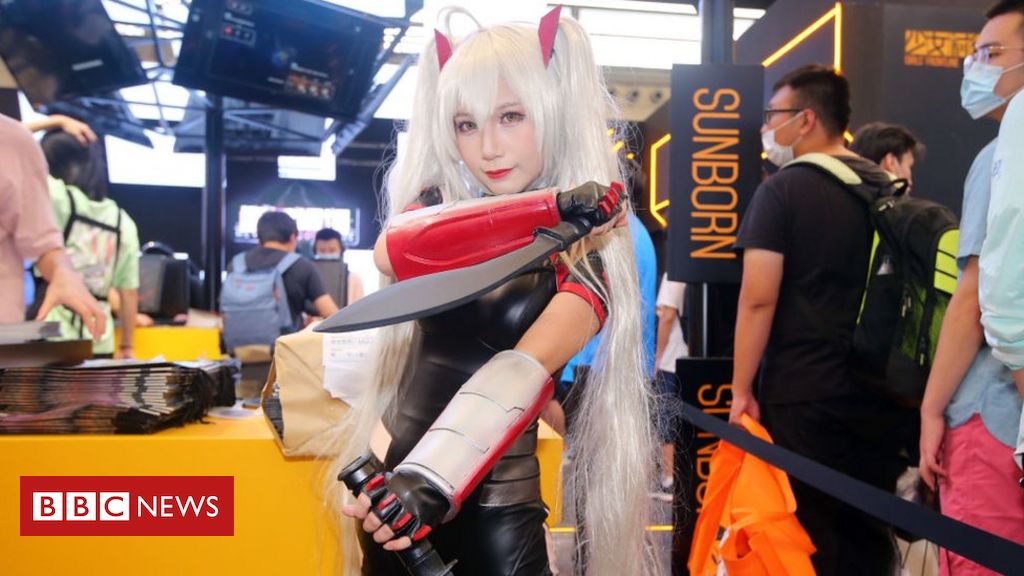 
ChinaJoy, Asia’s biggest video game conference, went ahead at the weekend, although it was very different from previous years’ events.

Most large-scale shows in the region have been scrapped as social distancing is enforced because of the coronavirus.

But about 150,000 gaming fans descended on ChinaJoy in Shanghai for the four-day event.

With a mix of real-world and online launches, many feel it could be the new normal for conferences.

This year’s event went ahead against a backdrop of recent technology and game show cancellations, including the popular CES Asia in Shanghai.

“We think this will help China and the world’s digital entertainment companies return to the track of rapid development as soon as possible, boost the confidence of the industry, help the industry to resume its normal,” Zhihai Han of Howell International Trade Fair told the BBC.

ChinaJoy visitors wore face masks, while facial recognition scans and temperature checks were used for admission to the show.

With the prospect of much smaller crowds, ChinaJoy opted for a mix of online launches alongside on-site events to attract more gamers.

“I really think this might be the beginning of what many want for customer-centric game shows. We expect this to be a standard for future events,” said Luke Stapley, senior marketing manager at Cocos.

“We worked very hard to provide a website experience that allowed people to view the biggest events at the show and research new games from their homes.”

The coronavirus pandemic has seen a surge in activity for the gaming industry, as people were forced to stay at home during lockdowns.

“Now that Covid-19 has pressed the accelerator on digitalization across the board and consumers are accepting live streaming as a normal way to experience events, we foresee this trend continuing,” said a spokesman for Bilibili, a popular video platform in China.

Some of the biggest names at ChinaJoy were home-grown developers and tech firms such as Tencent and NetEase. Many foreign developers couldn’t attend the event because of travel restrictions.

“Throughout the past decade, we have witnessed the development of the e-sports industry from a niche market to a mainstream one that is now one of the most popular sports among young people in China,” said Carly Lee, chief operating officer at Bilibili.

ChinaJoy attracts gamers from across China, predominantly young people keen to be the first to play new games.

Among those experiencing the event for the first time were two brothers aged 16 and 10.

“My brother has been studying at home, which is so boring. So, my parents asked me to take him out to visit a big exhibition like this, to feel the atmosphere of such a large-scale event,” said the older brother, who asked not to be named.

One female gamer (pictured) was on her third visit to ChinaJoy and enjoys dressing up in cosplay. “Having nothing to do drives me crazy, so I come out to have fun,” she said.

Rich Bishop, chief executive of app distribution firm AppInChina, added: “The most popular exhibitions were the stages which showed a combination of e-sports and scantily-dressed women giving dance performances.”