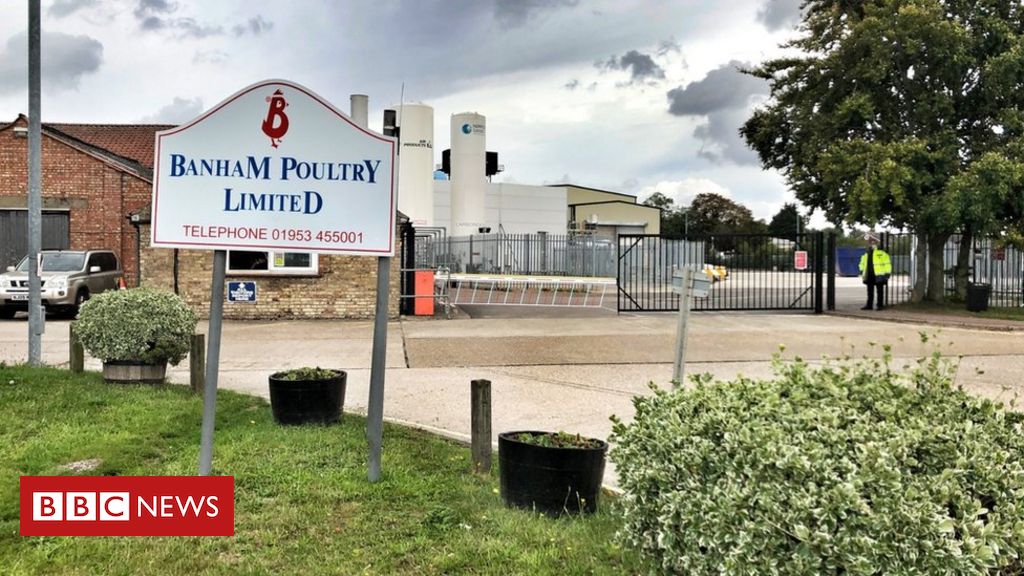 Coronavirus: What do we know about the Banham Poultry outbreak?

Coronavirus: What do we know about the Banham Poultry outbreak?


A poultry processing factory in Norfolk has seen 80 workers test positive for coronavirus in what has been described as a “significant” outbreak. This is what we know.

What is Banham Poultry?

Banham Poultry has been part of the poultry production industry in Norfolk for more than 50 years. It employs about 1,100 people, many of them eastern European.

In 2018, one million birds a week went through its factory, on an industrial estate on the outskirts of the market town of Attleborough.

The company, which supplies chicken products to supermarkets, accounts for 7% of chicken processing in the UK.

What do we know about the outbreak?

A worker tested positive for coronavirus on 21 August, which led to a small number of staff being tested.

Seven more tested positive on Monday and checks were then carried out on 347 employees.

As of Wednesday, 46 had tested positive and, by the evening, that had risen to 75, with one admitted to hospital. Their condition is unknown.

On Thursday, it was announced a further five had tested positive, bringing the total to 80, a rate of 21.2% – regarded as “high” by Dr Louise Smith, the director of public health in Norfolk.

She said there was no evidence that it began in the factory.

What has the factory done?

All those who tested positive worked in the cutting room, where slaughtered birds are made into cuts of meat.

That area of the factory was voluntarily closed by Banham from Thursday following advice from Public Health Norfolk and it is understood 7,000 birds were culled.

All 350 employees who work in that section were told to isolate, along with their households.

Public health bosses said no other cases had been identified in other areas of the factory, which remains partially open.

Blaine van Rensburg, managing director of Banham Poultry, said it would continue to ensure PPE was used and social distancing measures adhered to.

A deep clean will take place and staff and visitors are having their temperature taken.

Could this lead to a local lockdown?

Potentially, this could affect several towns in Norfolk, including Diss, Watton and Thetford, and the wider communities. A major track and trace operation is now under way.

Dr Smith said the numbers of positive tests at the factory were “significant at a national level” but a geographical lockdown was not anticipated at this stage.

“We would only move to that kind of measure if we were getting evidence of spread in the general public that could not be linked to a specific location, such as this outbreak,” she said.

“Background-level infection in Norfolk, outside of this location, is low.”

It is understood migrant workers make up the a large proportion of Banham’s workforce.

Dr Smith said about a third of the 350 workers who had been asked to isolate live either in Breckland – the local authority area where the factory is based – or in the districts of Great Yarmouth or Norwich.

Most live with co-workers in houses of multiple occupancy and travel and socialise together.

Dr Smith also said they were “learning” from similar outbreaks, including at sandwich-maker Greencore in Northampton, where more than 300 workers tested positive.

Northampton is a government “area of intervention” but a local lockdown has not been imposed.

Is there any risk to consumers?

According to Prof Paul Hunter, of the University of East Anglia, low temperatures may make food processing plants more susceptible to contagion.

“In food factories the air temperature is often quite cold, to help preserve the food and that coldness can actually allow the virus to survive longer before it’s inactivated,” he said.

“We think that the likelihood of infection being passed on the packaging of food is very low.

“The biggest risk is to people who are in close contact with a person breathing in moist air that contains the virus.”