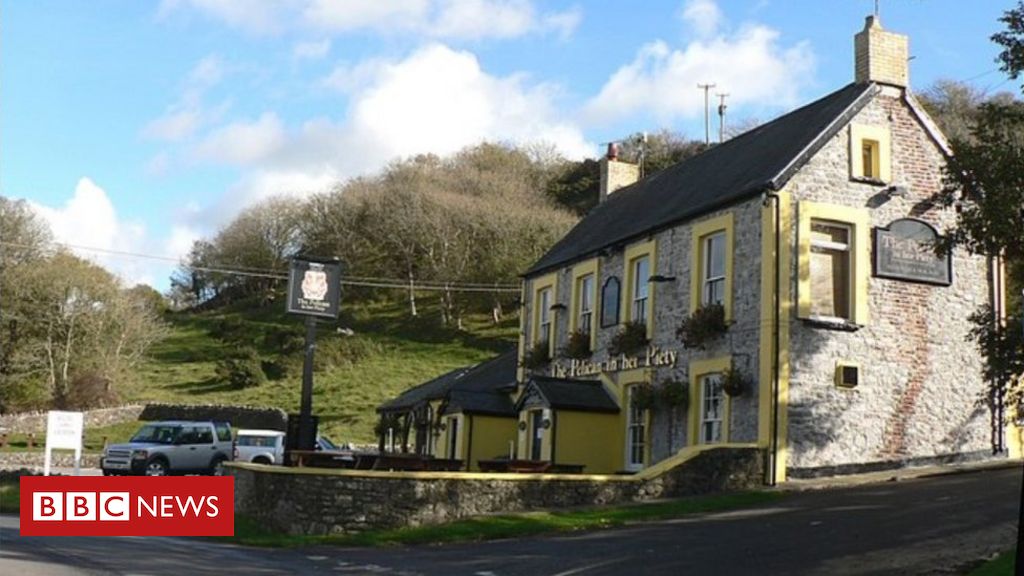 Coronavirus: Welsh pubs and cafes reopen – but only outdoors

Coronavirus: Welsh pubs and cafes reopen – but only outdoors


Pubs, bars, restaurants and cafes in Wales are allowed to start serving customers outdoors on Monday – but only half are predicted to open.

Major pub chains including Wetherspoons and Brains will wait until customers are allowed indoors from 3 August.

With turnover expected to be at 25% of pre-lockdown levels, independent businesses say only half will open.

After self-catering accommodation opened on Saturday, hairdressers will also welcome customers back on Monday.

He announced the date in a long list of changes to coronavirus restrictions, including that exemptions will be made to the 2m social distancing rule for some businesses.

One pub in Tintern,Monmouthshire, opened its beer garden early on Monday morning.

Royal George landlord Richard Secular said it had taken “a gigantic effort” to reopen and take the pub “from the inside to the outside”.

He added that customers were having their temperatures checked.

“We have built an outside bar with a cover so whatever the weather we can serve people,” he said.

Mark Griffiths owns four pubs in Bridgend and Vale of Glamorgan and is gearing up to start serving from two of these, while the other two will remain shut.

The Pelican, at Ogmore-by-Sea, has been serving takeaway food for a month, and Mr Griffiths said “it went really well, but we had to slow down”.

“We were selling too many and the bank behind it was like Henman Hill,” he said.

He is hoping to open the pub from 12:00 BST until 20:00, and maybe later on the weekend, as well as The Haywain in Brackla, Bridgend, where an 80-seater marquee has been erected in the car park in case it rains, with social distancing measures put in place.

Hundreds of people have booked tables on social media for The Haywain, including a group of eight for Monday, Friday and Saturday.

But Mr Griffiths has decided not to open his other two pubs – The Five Bells in Bridgend and The Seahorse in Porthcawl – because they have no outside area.

“I will concentrate on the two,” he said.

“The weather is looking quite good, so if I can get 100 people outside both pubs every day next week, that will be good.

“We have lost the summer money now, there’s no point trying to chase it. It’s a case of making what you can.”

‘The pressure is going to be on’

Reopening pubs in England on a Saturday was “irresponsible”, according to Adrian Emmett, of The Lion in Treorchy.

“I think the Scottish and Welsh governments have the right idea opening on a Monday. It will make my job a lot easier.”

Mr Emmett said “the pressure is going to be on” staff to make sure customers adhere to rules.

‘We have a modest garden’

At the St Brides Inn, Little Haven, Pembrokeshire, 80% of trade is from tourists.

Landlord Malcolm Whitewright has arranged tables two metres apart and hopes social distancing measures will be reduced to one metre.

“We have a modest garden with about ten tables available,” he said.

“We probably won’t make a profit but at least we will be up and running again and get some of our staff back to work.”

Out of 18 employees, about eight will start work again, with the rest remaining on furlough.

The landlord owns The Beaufort, in Raglan, Monmouthshire.

He told BBC Radio Wales he had made changes to the pub’s outdoor seating and had bought bought two tiki huts – a kind of outdoor bar.

“But when you get left alone in a big building and are a bit bored, you start spending money you haven’t got!”

He said staff were “really looking forward” to returning to work.

“We will attract a lot of people from the city, because they will come out to more rural areas because we have more outside space here,” Mr Santiago said.

‘A lot will depend on weather’

The Swansea-based Gower Brewery has been delivering hundreds of draught beer kegs in readiness – but the company’s Bob Dudley-Jones said many pubs in the city will not open.

“A lot have no beer gardens, or you have to go through the pub to get to them,” he said.

“More on the coast and seaside resorts will, but because people are sat outside, a lot will depend on the weather.”

The Welsh Independent Restaurant Collective warned that limited potential to make a profit would see as few as half of independent premises open on Monday.

None of the 104 pubs owned and managed by Cardiff-based brewer SA Brains will reopen, although some of the 40 which are tenanted may.

In a statement, it said it looked forward to welcoming customers when it has “the green light” to open fully – with 3 August announced as the date on Friday.

Brains is not the only chain to take this approach, with Wetherspoons and Mitchells & Butlers, each of which own about 50 pubs in Wales, not opening.

But Stonegate will open a number of its premises, including Henry’s, The Woodville and Owain Glyndwr in Cardiff, Railway Hotel in Penarth and The Carlton, Llandudno.

The Ei group will serve pints from 64 premises, including The Old Cross Keys in Swansea, Bulls Head in Bala and The Mitre in Pwllheli.