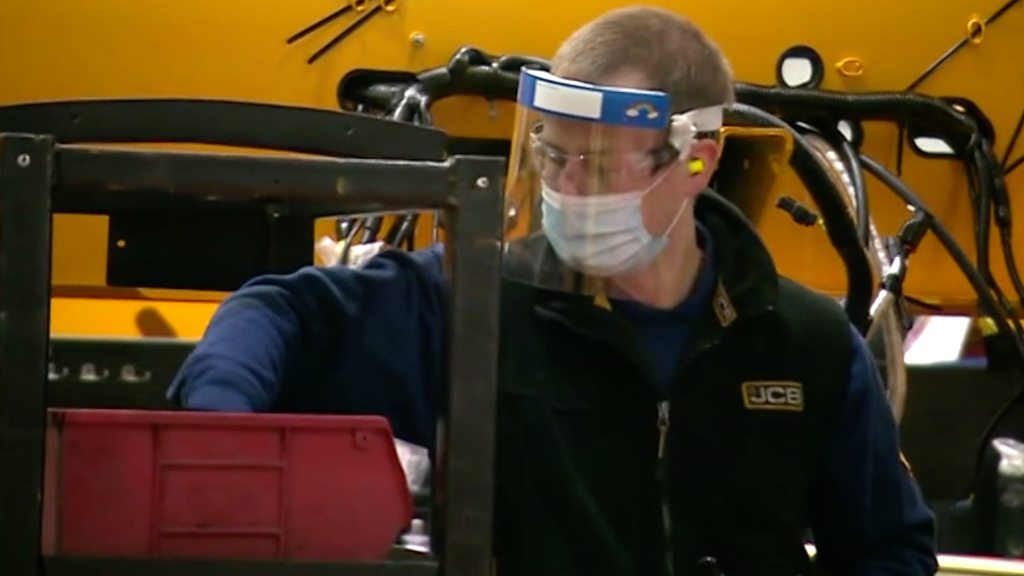 Coronavirus: Up to 950 JCB jobs at risk as ‘demand halves’

Coronavirus: Up to 950 JCB jobs at risk as ‘demand halves’


Up to 950 jobs are at risk of redundancy at JCB’s UK plants after it said demand had fallen by half as a result of the coronavirus pandemic.

JCB has written to its UK employees to advise up to 950 staff roles are under threat at its 10 plants in Staffordshire, Derbyshire and Wrexham in north Wales.

A 45-day consultation period will begin on Monday, the firm said.

The GMB union said the announcement was “devastating to everyone involved.”

About 500 Guidant agency employees, who work at UK sites, are also being released from the business.

JCB said the jobs were at risk “as a result of the severe disruption caused to JCB’s business by the Covid-19 crisis, which will see annual production halved”.

Chief executive Graeme Macdonald said the decision to restructure JCB’s business had been extremely tough but the company “had no choice but to take difficult decisions to adapt to this new economic reality”.

JCB currently employs about 6,700 people in the UK, including agency employees.

The consultation will begin on Monday when discussions with staff representatives will start.

The vast majority of JCB’s employees are currently furloughed until the end of May after production at its UK factories stopped in March.

However, about 400 workers returned to production roles on Monday at its headquarters in Rocester.

Mr Macdonald said it was “deeply regrettable that we have had to take these steps to restructure the business and that it will have an impact on so many people”.

“With so much global uncertainty, that figure right now is looking more like 50,000 machines.

“No business could have anticipated the scale of the Covid-19 crisis and its economic consequences.”

Staffordshire Chamber of Commerce chief Sarah Williams said: “It’s really tragic… for the people who are potentially losing their livelihoods.

“It’s the tip of the iceberg, we are expecting others companies to face crashes in their markets and reduction in demand, in what is potentially a worldwide recession.”

Stuart Harrison, from GMB, said its “senior representatives have entered into urgent talks about the future of the business with management”.

“We will keep fighting to avoid job losses at all costs, for our members and their families,” he added.