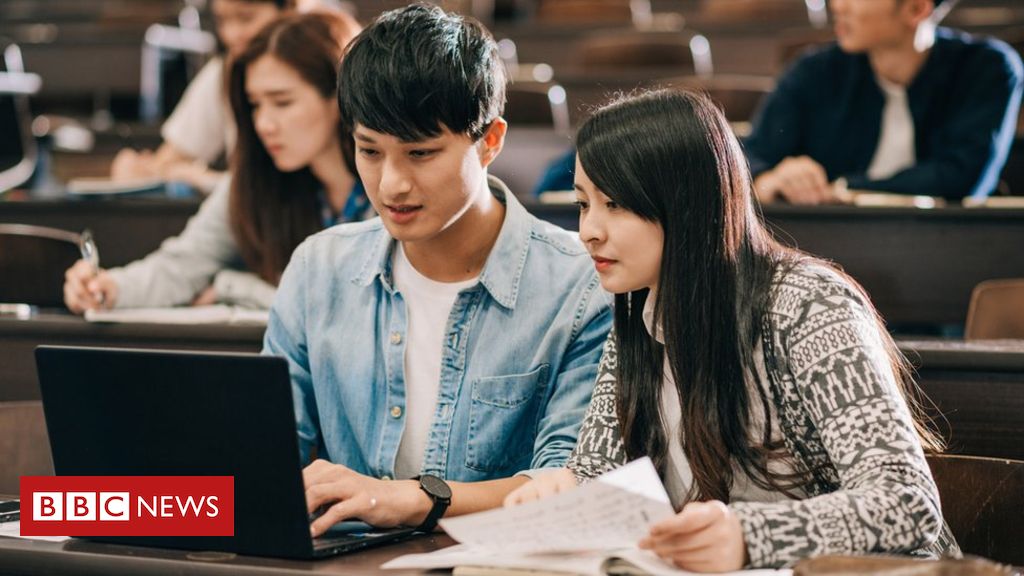 
Which sector of the economy do you think is being hardest hit by the coronavirus – construction, retail, transport or catering?

Well, you are all wrong, and need to do some more homework. The answer is – education.

Many people probably don’t even think of education as part of the economy. The groves of academe are surely above such sordid considerations as money and finance?

Not a bit of it. Money is the lifeblood of education – endowments from wealthy alumni, catering and accommodation fees, conference facilities, and the biggest of the lot – attracting lots of fee-paying students every year.

The trouble for the education sector is that it is uniquely vulnerable to the coronavirus pandemic.

For hundreds of years its business model has been to bring thousands of people together from across the country, and around the world, to sit together in rooms for three years and talk to each other.

As a result, nearly all its income streams are under attack at the same time.

Current students have been sent home, and many courses have moved online. If lockdowns around the world continue, new students are going to be hard to find in the autumn, and even harder to get on campus.

Plus, conferences are not happening, and all those wealthy alumni are nowhere near as wealthy as they thought they were.

This hits Western English-speaking universities particularly hard. They tend to charge even domestic students large tuition fees, and make money out of on-site catering and accommodation on top of that.

They also tend to charge foreign students a lot more, making them a huge source of income for many universities. In the UK, for example, undergraduate students from outside the UK and the EU can be charged annual tuition fees as high as £58,600 instead of the standard £9,000.

So, while globalisation for many means importing cheaper manufactured goods from around the world, for developed economies one of their greatest recent economic successes has been attracting students from overseas.

The rise of the middle classes around the world has been a godsend for Western universities, says Simon Marginson, professor of higher education at the University of Oxford.

“The global middle classes have grown by leaps and bounds in recent decades, and anyone in that group can send their children abroad for education,” he says.

They have been doing just that, not least because many developing countries don’t have the same quality of tertiary education as developed ones. This means that students who study abroad emerge with a prestigious degree, a second language, and lots of contacts and friends. It has proved a price worth paying for millions.

The big winners in this regard have been the US, the UK and Australia. All with excellent education systems that teach in English, they can attract fee paying students from around the world.

In the US, 360,000 Chinese students started the last academic year. The influx of foreign students is estimated to be worth as much as $45bn (£37bn) a year to the American economy.

In Australia, foreign students are said to bring in more than 30bn Australian dollars a year ($20bn; £16bn), and it is a market that Australian universities have been targeting for years.

Andrew Norton, professor of the practice of higher education policy at Australian National University in Canberra, says the country has been trying to attract foreign students from Asia since the 1980s.

Australia has some distinct advantages for these students, he says. “We are in much the same time zone, the climate is attractive, and there is the possibility of migrating here.”

But the government in Canberra has not helped the sector very much, if at all, during this crisis. Prime Minister Scott Morrison even went as far as saying that foreign students should consider going back to their home countries if they could not support themselves during the lockdown.

That message is hardly likely to encourage new students to feel welcome in future, and that matters, says Prof Norton, because “there is a pipeline effect”.

“If students don’t start a degree course this year, then they are not here for three years,” he says, meaning universities are going to be feeling the pressure of lost income for years to come, and not only in Australia.

In the US the university sector is a massive business. Some of the oldest and most famous colleges have billions in reserve, massive endowments, and a reputation that means they can charge students top dollar. But even they are suffering being closed now.

Many overseas students in the US are demanding rebates for lost lessons, and American universities make a small fortune from having students on site. Catering and accommodation are huge earners. Students in the UK have also been calling for refunds.

Vijay Govindarajan, Coxe distinguished professor at Tuck School of Business at Dartmouth College, says: “I don’t see how we can reopen and have campus classes this fall [autumn]”.

Professor Marginson says that while universities have rushed to move courses online, at least temporarily, it is clear that they are not as attractive.

“Students, if given the choice, pick face-to-face teaching,” he says. “Online does not have the same prestige, and not just with employers, but with society as well.”

In the UK, Cambridge University has announced that all its lectures will be online-only during the next academic year. However, it said it would review the situation if government guidance changed.

Colleges and universities around the world have moved rapidly towards online and remote teaching now, because they have to. When much of the world is in lockdown and social distancing is the norm, they have no choice, and it is the only way of keeping at least some money coming in.

But it is not clear how many universities will survive the collapse of their income, and whether the move online will become permanent. Teaching people together on one site has proved to be a very long-lasting and successful business model, and it still carries huge prestige and rewards for those taking part.